A branch of the Coastal Federal Credit Union in Raleigh, North Carolina

A credit union is a member-owned financial cooperative, controlled by its members and operated on the principle of people helping people, providing its members credit at competitive rates as well as other financial services.[1][2]

Worldwide, credit union systems vary significantly in terms of total assets and average institution asset size, ranging from volunteer operations with a handful of members to institutions with assets worth several billion U.S. dollars and hundreds of thousands of members.[3] In 2018 the number of members in credit unions worldwide was 274 million, with nearly 40 million members being added since 2016[4].

Differences from other financial institutions[edit]

Credit unions differ from banks and other financial institutions in that those who have accounts in the credit union are its members and owners,[1] and they elect their board of directors in a one-person-one-vote system regardless of their amount invested.[1] Credit unions see themselves as different from mainstream banks, with a mission to be "community-oriented" and "serve people, not profit".[12][13][14]

Credit unions offer many of the same financial services as banks but often use different terminology. Typical services include share accounts (savings accounts), share draft accounts (checking accounts), credit cards, share term certificates (certificates of deposit), and online banking. Normally, only a member of a credit union may deposit or borrow money.[1] Surveys of customers at banks and credit unions have consistently shown significantly higher customer satisfaction rates with the quality of service at credit unions.[15][16] Credit unions have historically claimed to provide superior member service and to be committed to helping members improve their financial situation. In the context of financial inclusion, credit unions claim to provide a broader range of loan and savings products at a much cheaper cost to their members than do most microfinance institutions.[17]

In the credit union context, "not-for-profit" must be distinguished from a charity.[18] Credit unions are "not-for-profit" because their purpose is to serve their members rather than to maximize profits,[17][17][18] so unlike charities and the like, credit unions do not rely on donations and are financial institutions that must make what is, in economic terms, a small profit (i.e., in non-profit accounting terms, a "surplus") to remain in existence.[17][19] According to the World Council of Credit Unions (WOCCU), a credit union's revenues (from loans and investments) must exceed its operating expenses and dividends (interest paid on deposits) in order to maintain capital and solvency.[19] 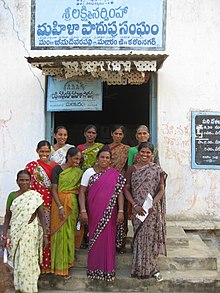 The directors of the Mulukanoor Women's Thrift Cooperative stand at the entrance to their credit union in Karimnagar district, Andhra Pradesh, India

According to the World Council of Credit Unions (WOCCU), at the end of 2014 there were 57,480 credit unions in 105 countries. Collectively they served 217.4 million members and oversaw US$1.79 trillion in assets.[22] WOCCU does not include data from cooperative banks, so, for example, some countries generally seen as the pioneers of credit unionism, such as Germany, France, the Netherlands, and Italy, are not always included in their data. The European Association of Co-operative Banks reported 38 million members in those four countries at the end of 2010.[23] 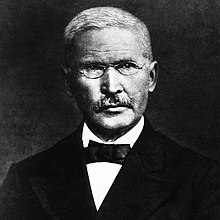 Modern credit union history dates from 1852, when Franz Hermann Schulze-Delitzsch consolidated the learning from two pilot projects, one in Eilenburg and the other in Delitzsch in the Kingdom of Saxony into what are generally recognized as the first credit unions in the world. He went on to develop a highly successful urban credit union system.[27] In 1864 Friedrich Wilhelm Raiffeisen founded the first rural credit union in Heddesdorf (now part of Neuwied) in Germany.[27] By the time of Raiffeisen's death in 1888, credit unions had spread to Italy, France, the Netherlands, England, Austria, and other nations.[28]

The first credit union in North America, the Caisse Populaire de Lévis in Quebec, Canada, began operations on January 23, 1901 with a 10-cent deposit. Founder Alphonse Desjardins, a reporter in the Canadian parliament, was moved to take up his mission in 1897 when he learned of a Montrealer who had been ordered by the court to pay nearly C$5,000 in interest on a loan of $150 from a moneylender. Drawing extensively on European precedents, Desjardins developed a unique parish-based model for Quebec: the caisse populaire.[citation needed]

After being promoted by the Catholic Church in the 1940s to assist the poor in Latin America, credit unions expanded rapidly during the 1950s and 1960s, especially in Bolivia, Costa Rica, the Dominican Republic, Honduras, and Peru. The Regional Confederation of Latin American Credit Unions (COLAC) was formed and with funding by the Inter-American Development Bank credit unions in the regions grew rapidly throughout the 1970s and into the early 1980s. By 1988 COLAC credit unions represented 4 million members across 17 countries with a loan portfolio of circa half a billion US dollars. However, from the late 1970s onwards many Latin American credit unions struggled with inflation, stagnating membership, and serious loan recovery problems. In the 1980s donor agencies such as USAID attempted to rehabilitate Latin American credit unions by providing technical assistance and focusing credit unions' efforts on mobilising deposits from the local population. In 1987, the regional financial crisis caused a run on credit unions. Significant withdrawals and high default rates caused liquidity problems for many credit unions in the region.[31]

Credit unions and banks in most jurisdictions are legally required to maintain a reserve requirement of assets to liabilities. If a credit union or traditional bank is unable to maintain positive cash flow and/or is forced to declare insolvency, its assets are distributed to creditors (including depositors) in order of seniority according to bankruptcy law. If the total deposits exceed the assets remaining after more senior creditors are paid, all depositors will lose some or all of their initial deposits. However, most jurisdictions have deposit insurance that promises to make depositors whole up to a maximum insurable account level. In the aftermath of the financial crisis of 2007–2008, there was a dramatic increase in the number of bank failures but not in the number of credit union failures, and in 2017, all depositors at failed credit unions were fully covered by deposit insurance, but depositors at a failed traditional bank were not covered by deposit insurance.[32][failed verification]

State credit union leagues can partner with outside organizations to promote initiatives for credit unions or customers. For example, the Indiana Credit Union League sponsors an initiative called "Ignite", which is used to encourage innovation in the credit union industry, with the Filene Research Institute.[33]

The National Association of Federally-Insured Credit Unions (NAFCU)is a national trade association for all state and federally-chartered credit unions. Based outside of Washington, D.C., NAFCU's mission is to provide all credit unions with federal advocacy, compliance assistance, and education.

The World Council of Credit Unions (WOCCU) is both a trade association for credit unions worldwide and a development agency. The WOCCU's mission is to "assist its members and potential members to organize, expand, improve and integrate credit unions and related institutions as effective instruments for the economic and social development of all people".[34]

In Canada, most credit unions are provincially incorporated and regulated, with deposit insurance provided by a provincial Crown corporation. For example, in Ontario, up to $250,000 of coverage is provided through the Deposit Insurance Corporation of Ontario.

Retrieved from "http://en.turkcewiki.org/w/index.php?title=Credit_union&oldid=935717391"
This website is a mirror of Wikipedia, and is not affiliated with the Wikimedia Foundation.
Categories:
Hidden categories: