Jump to navigation Jump to search
Type of chamber tomb found in western and northern Ireland, and southwest Scotland 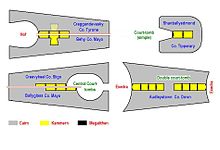 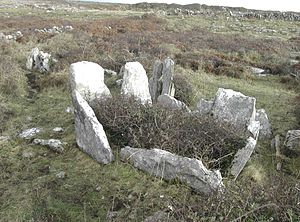 The remains of the chamber of Teergonean court cairn

The court cairn or tomb is a megalithic type of chamber tomb and gallery grave, specifically a variant of the chambered cairn, found in western and northern Ireland, and in mostly southwest Scotland (where it may also be called a horned cairn or Clyde-Carlingford tomb), around 4000–3500 BCE, but many remained in use until as late as the Bronze Age transition, c. 2200 BCE. They are generally considered to be the earliest chambered cairn tombs in Scotland, and their construction technique was probably brought from Scotland to Ireland.[1] In Scotland, they are most common in what today are Argyll and Dumfries and Galloway (where they form the Clyde-Carlingford group), though a small outlying group have been found near Perth.

Court tombs are rectangular burial chambers. They are distinguished by their roofless, oval forecourt at the entrance. Large slabs of rock were used to make the walls and roof of the very basic burial chamber, normally located at one end of the cairn, which although usually blocked after use could be immediately accessed from the outside courtyard. They are gallery graves rather than passage graves, since they lack any significant passage.

They usually had two functions: the chamber to serve as a tomb, and the courtyard to accommodate a ritual. Objects were often buried with the deceased, as the first neolithic people of this time believed in life after death.

Retrieved from "http://en.turkcewiki.org/w/index.php?title=Court_cairn&oldid=885834895"
This website is a mirror of Wikipedia, and is not affiliated with the Wikimedia Foundation.
Categories:
Hidden categories: