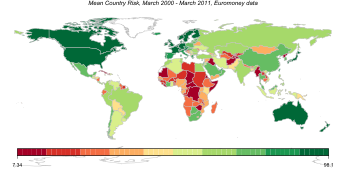 Country risk refers to the risk of investing or lending in a country, arising from possible changes in the business environment that may adversely affect operating profits or the value of assets in the country. For example, financial factors such as currency controls, devaluation or regulatory changes, or stability factors such as mass riots, civil war and other potential events contribute to companies' operational risks. This term is also sometimes referred to as political risk; however, country risk is a more general term that generally refers only to risks affecting all companies operating within or involved with a particular country.

Retrieved from "http://en.turkcewiki.org/w/index.php?title=Country_risk&oldid=944528866"
This website is a mirror of Wikipedia, and is not affiliated with the Wikimedia Foundation.
Categories:
Hidden categories: