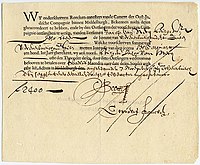 A bond from the Dutch East India Company (VOC), dating from 7 November 1623. The VOC was the first company in history to widely issue bonds and shares of stock to the general public.

A corporate bond is a bond issued by a corporation in order to raise financing for a variety of reasons such as to ongoing operations, M&A, or to expand business.[1] The term is usually applied to longer-term debt instruments, with maturity of at least one year. Corporate debt instruments with maturity shorter than one year are referred to as commercial paper.

The term "corporate bond" is not strictly defined. Sometimes, the term is used to include all bonds except those issued by governments in their own currencies. In this case governments issuing in other currencies (such as the country of Mexico issuing in US dollars) will be included. The term sometimes also encompasses bonds issued by supranational organizations (such as European Bank for Reconstruction and Development). Strictly speaking, however, it only applies to those issued by corporations. The bonds of local authorities (municipal bonds) are not included.

The second largest market is in Euro denominated corporate bonds. Other markets tend to be small by comparison and are usually not well developed, with low trading volumes. Many corporations from other countries issue in either US Dollars or Euros. Foreign corporations issuing bonds in the US Dollar market are called Yankees and their bonds are Yankee bonds.

Corporate bonds are divided into two main categories High Grade (also called Investment Grade) and High Yield (also called Non-Investment Grade, Speculative Grade, or Junk Bonds) according to their credit rating. Bonds rated AAA, AA, A, and BBB are High Grade, while bonds rated BB and below are High Yield. This is a significant distinction as High Grade and High Yield bonds are traded by different trading desks and held by different investors. For example, many pension funds and insurance companies are prohibited from holding more than a token amount of High Yield bonds (by internal rules or government regulation). The distinction between High Grade and High Yield is also common to most corporate bond markets.

The coupon (i.e. interest payment) is usually taxable for the investor. It is tax deductible for the corporation paying it. For US Dollar corporates, the coupon is almost always semi annual, while Euro denominated corporates pay coupon quarterly.

The coupon can be zero. In this case the bond, a zero-coupon bond, is sold at a discount (i.e. a $100 face value bond sold initially for $80). The investor benefits by paying $80, but collecting $100 at maturity. The $20 gain (ignoring time value of money) is in lieu of the regular coupon. However, this is rare for corporate bonds.

Some corporate bonds have an embedded call option that allows the issuer to redeem the debt before its maturity date. These are called callable bonds. A less common feature is an embedded put option that allows investors to put the bond back to the issuer before its maturity date. These are called putable bonds. Both of these features are common to the High Yield market. High Grade bonds rarely have embedded options. A straight bond that is neither callable nor putable is called a bullet bond.

Other bonds, known as convertible bonds, allow investors to convert the bond into equity. They can also be secured or unsecured, senior or subordinated, and issued out of different parts of the company's capital structure.

High Grade corporate bonds usually trade on credit spread. Credit spread is the difference in yield between the corporate bond and a Government bond of similar maturity or duration (e.g. for US Dollar corporates, US Treasury bonds). It is essentially the extra yield an investor earns over a risk free instrument as a compensation for the extra risk: thus, the better the quality of the bond, the smaller the spread between its required return and the yield to maturity (YTM) of the benchmark; see #Risk analysis below. This increased required return is then used to discount the bond's cash flows, using the present value formula for bonds, to obtain the bond's price. See Bond (finance) #Bond valuation for discussion, and for the math, Bond valuation.

The most common derivative on corporate bonds are called credit default swaps (CDS) which are contracts between two parties that provide a synthetic exposure with similar risks to owning the bond. The bond that the CDS is based on is called the Reference Entity and the difference between the credit spread of the bond and the spread of the CDS is called the Bond-CDS basis.

Compared to government bonds, corporate bonds generally have a higher risk of default. This risk depends on the particular corporation issuing the bond, the current market conditions and governments to which the bond issuer is being compared and the rating of the company. Corporate bond holders are compensated for this risk by receiving a higher yield than government bonds. The difference in yield (called credit spread) reflects the higher probability of default, the expected loss in the event of default, and may also reflect liquidity and risk premia; see Yield spread #Yield spread analysis, Bond credit rating, High-yield debt.

Other risks in corporate bonds[edit]

Default Risk has been discussed above but there are also other risks for which corporate bondholders expect to be compensated by credit spread. This is, for example why the Option Adjusted Spread on a Ginnie Mae MBS will usually be higher than zero to the Treasury curve.

Frankly, I find it surprising that there has been so little attention to pre-trade transparency in the design of the U.S. bond markets. While some might argue that this is a consequence of the degree of fragmentation in the bond market, I would point to options markets and European bond markets-which are similarly fragmented, but much more transparent on a pre-trade basis.[3]

A combination of mathematical and regulatory initiatives are aimed at addressing pre-trade transparency in the U.S. corporate bond markets.

In February 2015 it was expected that Apple Inc. would issue its corporate bonds in Swiss francs, as the yields of Switzerland's government bonds went negative.[4] Taking advantage of the very low borrowing costs, the computer maker intended to sell CHF-denominated bonds for the first time. The California-based company did sell positive-yield and Swiss franc-denominated bonds on the 10th of February 2015, borrowing CHF 1.25 billion (nearly equivalent to USD 1.35 billion). It was thought that the company aimed to expand its total shareholder return more in 2015 than in 2014.[5]

Retrieved from "http://en.turkcewiki.org/w/index.php?title=Corporate_bond&oldid=957248609"
This website is a mirror of Wikipedia, and is not affiliated with the Wikimedia Foundation.
Categories:
Hidden categories: