Convexity is an important topic in economics.[1] In the Arrow–Debreu model of general economic equilibrium, agents have convex budget sets and convex preferences: At equilibrium prices, the budget hyperplane supports the best attainable indifference curve.[2] The profit function is the convex conjugate of the cost function.[1][2] Convex analysis is the standard tool for analyzing textbook economics.[1] Non‑convex phenomena in economics have been studied with nonsmooth analysis, which generalizes convex analysis.[3]

The economics depends upon the following definitions and results from convex geometry.

A convex set covers the line segment connecting any two of its points.

A non‑convex set fails to cover a point in some line segment joining two of its points.
Line segments test convexity.

A real vector space of two dimensions may be given a Cartesian coordinate system in which every point is identified by a list of two real numbers, called "coordinates", which are conventionally denoted by x and y. Two points in the Cartesian plane can be added coordinate-wise

further, a point can be multiplied by each real number λ coordinate-wise

More generally, any real vector space of (finite) dimension D can be viewed as the set of all possible lists of D real numbers { (v1, v2, . . . , vD) } together with two operations: vector addition and multiplication by a real number. For finite-dimensional vector spaces, the operations of vector addition and real-number multiplication can each be defined coordinate-wise, following the example of the Cartesian plane. 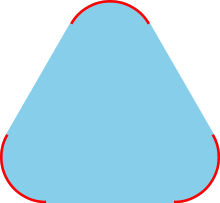 In the convex hull of the red set, each blue point is a convex combination of some red points.

In a real vector space, a set is defined to be convex if, for each pair of its points, every point on the line segment that joins them is covered by the set. For example, a solid cube is convex; however, anything that is hollow or dented, for example, a crescent shape, is non‑convex. Trivially, the empty set is convex.

More formally, a set Q is convex if, for all points v0 and v1 in Q and for every real number λ in the unit interval [0,1], the point

is a member of Q.

For every subset Q of a real vector space, its convex hull Conv(Q) is the minimal convex set that contains Q. Thus Conv(Q) is the intersection of all the convex sets that cover Q. The convex hull of a set can be equivalently defined to be the set of all convex combinations of points in Q. 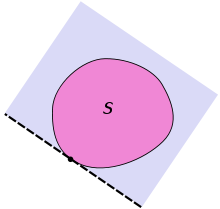 (in pink), a supporting hyperplane of

(the dashed line), and the half-space delimited by the hyperplane that contains

in the real n-space

if it meets both of the following:

Here, a closed half-space is the half-space that includes the hyperplane. 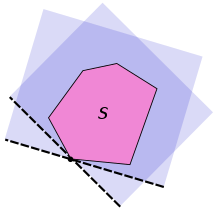 A convex set can have more than one supporting hyperplane at a given point on its boundary.

This theorem states that if

is a closed convex set in

is a point on the boundary of

then there exists a supporting hyperplane containing

The hyperplane in the theorem may not be unique, as noticed in the second picture on the right. If the closed set

is not convex, the statement of the theorem is not true at all points on the boundary of

as illustrated in the third picture on the right. 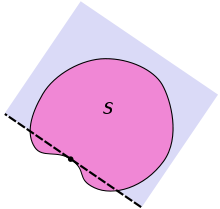 A supporting hyperplane containing a given point on the boundary of

may not exist if 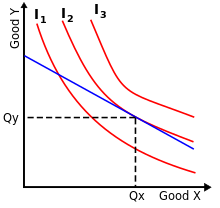 The consumer prefers the vector of goods (Qx, Qy) over other affordable vectors. At this optimal vector, the budget line supports the indifference curve I2.

For simplicity, we shall assume that the preferences of a consumer can be described by a utility function that is a continuous function, which implies that the preference sets are closed. (The meanings of "closed set" is explained below, in the subsection on optimization applications.)

When consumer preferences have concavities, then the linear budgets need not support equilibria: Consumers can jump between allocations.

If a preference set is non‑convex, then some prices produce a budget supporting two different optimal consumption decisions. For example, we can imagine that, for zoos, a lion costs as much as an eagle, and further that a zoo's budget suffices for one eagle or one lion. We can suppose also that a zoo-keeper views either animal as equally valuable. In this case, the zoo would purchase either one lion or one eagle. Of course, a contemporary zoo-keeper does not want to purchase a half an eagle and a half a lion (or a griffin)! Thus, the contemporary zoo-keeper's preferences are non‑convex: The zoo-keeper prefers having either animal to having any strictly convex combination of both.

Non‑convex sets have been incorporated in the theories of general economic equilibria,[4] of market failures,[5] and of public economics.[6] These results are described in graduate-level textbooks in microeconomics,[7] general equilibrium theory,[8] game theory,[9] mathematical economics,[10] and applied mathematics (for economists).[11] The Shapley–Folkman lemma results establish that non‑convexities are compatible with approximate equilibria in markets with many consumers; these results also apply to production economies with many small firms.[12]

In "oligopolies" (markets dominated by a few producers), especially in "monopolies" (markets dominated by one producer), non‑convexities remain important.[13] Concerns with large producers exploiting market power in fact initiated the literature on non‑convex sets, when Piero Sraffa wrote about on firms with increasing returns to scale in 1926,[14] after which Harold Hotelling wrote about marginal cost pricing in 1938.[15] Both Sraffa and Hotelling illuminated the market power of producers without competitors, clearly stimulating a literature on the supply-side of the economy.[16] Non‑convex sets arise also with environmental goods (and other externalities),[17][18] with information economics,[19] and with stock markets[13] (and other incomplete markets).[20][21] Such applications continued to motivate economists to study non‑convex sets.[22]

Economists have increasingly studied non‑convex sets with nonsmooth analysis, which generalizes convex analysis. "Non‑convexities in [both] production and consumption ... required mathematical tools that went beyond convexity, and further development had to await the invention of non‑smooth calculus" (for example, Francis Clarke's locally Lipschitz calculus), as described by Rockafellar & Wets (1998)[23] and Mordukhovich (2006),[24] according to Khan (2008).[3] Brown (1995, pp. 1967–1968) harvtxt error: no target: CITEREFBrown1995 (help) wrote that the "major methodological innovation in the general equilibrium analysis of firms with pricing rules" was "the introduction of the methods of non‑smooth analysis, as a [synthesis] of global analysis (differential topology) and [of] convex analysis." According to Brown (1995, p. 1966) harvtxt error: no target: CITEREFBrown1995 (help), "Non‑smooth analysis extends the local approximation of manifolds by tangent planes [and extends] the analogous approximation of convex sets by tangent cones to sets" that can be non‑smooth or non‑convex..[25] Economists have also used algebraic topology.[26]

Retrieved from "http://en.turkcewiki.org/w/index.php?title=Convexity_in_economics&oldid=937411112"
This website is a mirror of Wikipedia, and is not affiliated with the Wikimedia Foundation.
Categories:
Hidden categories: