Contactless payment systems are credit cards and debit cards, key fobs, smart cards, or other devices, including smartphones and other mobile devices, that use radio-frequency identification (RFID) or near field communication (NFC, e.g. Samsung Pay, Apple Pay, Google Pay, Fitbit Pay, or any bank mobile application that supports contactless) for making secure payments. The embedded integrated circuit chip and antenna enable consumers to wave their card, fob, or handheld device over a reader at the point of sale terminal. Contactless payments are made in close physical proximity, unlike mobile payments which use broad-area cellular or WiFi networks and do not involve close physical proximity.

EMV is a common standard used by major credit card and smartphone companies for use in general commerce. Contactless smart cards that function as stored-value cards are becoming popular for use as transit system farecards, such as the Oyster card or RioCard. These can often store non-currency value (such as monthly passes), in additional to fare value purchased with cash or electronic payment.

Some suppliers claim that transactions can be almost twice as fast as a conventional cash, credit, or debit card purchase. Because no signature or PIN verification is typically required, contactless purchases are typically limited to small value sales. Lack of authentication provides a window during which fraudulent purchases can be made while the card owner is unaware of the card's loss.

Major financial institutions & multinational corporations now offer contactless payment systems to customers as contactless credit cards have become widespread in the U.S., U.K., Japan, Germany, Canada, Australia, France, the Netherlands, etc, as consumers are likely to spend more money using their cards due to the ease of small transactions. With contactless cards growing in numbers and percentages of adoption, the number of payments by this method had increased significantly since the spending limit was raised, purchases made by card now surpassed those made by cash and now account for approximately one-third of all card transactions in countries like the U.K. Contactless payments have approached saturation point, being used in over 90%+ of purchases in Australia. Card issuers indicate they will increase the availability of contactless cards to consumers. With over 58 million contactless-enabled cards and over 147,000 terminals in use in the UK alone, Visa estimates there will be 300 million contactless cards issued in the US by the end of 2020, up from the predicted 100 million at the end of this year.

Mobil was one of the most notable early adopters of a similar technology, and offered their "Speedpass" contactless payment system for participating Mobil gas stations as early as 1997. Although Mobil has since merged with Exxon, the service is still offered at many of ExxonMobil's stations. Freedompay also had early wins in the contactless space with Bank of America[1] and McDonald's.[2]

In 2002, Philips teamed up with Sony to elaborate the NFC standard.[3][4] Then Philips Semiconductors applied for the six fundamental patents of NFC, invented by the Austrian and French engineers Franz Amtmann and Philippe Maugars who received the European Inventor Award in 2015.[5]

In July 2004, Sony, who had implemented the contactless RFID smart card FeliCa in Japan, introduced the Osaifu-Keitai (おサイフケータイ) system (literal translation: "wallet-phone") developed with the mobile phone operator NTT DoCoMo on multiple FeliCa systems such as Edy and, on 28 January 2006, on Mobile Suica used primarily on the railway networks owned by JR East.[6]

In May 2005, after some experimentation in the Netherlands, the contactless diferred payment at the end of each month, after the registration of the trips aboard with a contacless mobile phone on the client's account, was first experimented in Germany during 6 months on the tramways and bus of Hanau with the Nokia 3220 using the NFC standard of Philips and Sony.[7]

In October 2005, the immediate contactless payment was first experimented in France in Caen during 6 months with a Samsung NFC smartphone by Orange in collaboration with Philips Semiconductors in the Cofinoga shops (Galeries Lafayette, Monoprix) and Vinci parkings. For the first time, thanks to "Fly Tag", the system allowed to receive as well audiovisual informations, like bus timetables or cinema trailers from the concerned services.[6][4] On June 2007, the payment with a contactless bank card was tested at the FNAC of La Défense in Paris and from 19 November 2007 to 2009 in some shops of Caen and Strasbourg, this time with smartphones NFC, provided by four operators (Orange, Bouygues Telecom, SFR and NRJ Mobile)[4]. On 5 November 2007, Orange and the transport societies SNCF and Keolis associated themselves for a 2 months experimentation with smartphones in Rennes in the metro, bus and TER trains.[8][4]

The first contactless cards in the UK were issued by Barclaycard in September 2007.[9] PayPass trialed the world's first NFC-enabled phone, the Nokia 6131 NFC, in New York in 2007.[10]

On 19 January 2009, NFC is used in transports for the first time in the world by China Unicom and Yucheng Transportation Card with Changhong DG28 and F4 mobile phones in the tramways and bus of Chongqing in China.[12]

After a test conducted from October 2005 to November 2006 with 27 users[15], on 21 May 2010, the transport authority of Nice Régie Lignes d'Azur was the first public transport provider in Europe to add definitely to its own offer a contactless payment on its tramways and bus network either with a NFC bank card or smartphone application notably on Samsung Player One (with the same mobile phone operators than in Caen and Strasbourg in 2007), as well as the validation aboard with them of the transport titles and the loading of these titles onto the smartphone, in addition to the season tickets contactless card.[16] This service was as well experimented then respectively implemented for NFC smartphones on 18 and 25 June 2013 in the tramways and bus of Caen[17][18] and Strasbourg.[19][20], after the contactless payment on the 765 pay and display parking machines of Strasbourg was made available in October 2011. In the Paris transport network, after a 4 months testing from November 2006 with Bouygues Telecom and 43 persons[15] and finally with 8,000 users from July 2018, the contactless mobile payment and direct validation on the turnstile readers with a smartphone was adopted on 25 September 2019[21][22][23] in collaboration with the societies Orange, Samsung, Wizway Solutions, Worldline and Conduent.

NFC is used in Seoul[24] after its introduction in Korea by the discount retailer Homeplus in March 2010[25] and in Tokyo it is tested then adopted or added to the existing systems, like the mobile wallet Osaifu-Keitai, from May 2010 to end of 2012.[26][27] The NFC standard is implemented for the first time in a metro network, by China Unicom in Beijing on 31 December 2010.[28]

In October 2011, the first mobile phones with Mastercard PayPass and/or Visa payWave certification appeared. A PayPass or payWave account can be assigned to the embedded secure element and/or SIM card within the phones.

In February 2014, Mastercard announced that it would partner with Weve, which is a joint venture between EE, Telefónica UK, and Vodafone UK, to focus on mobile payments. The partnership will promote the development of "contactless mobile payment systems" by creating a universal platform in Europe for it.[29]

On 9 September 2014, Apple Inc. announced Apple Pay, a proprietary form of contactless payment integrated with its popular smartphone hardware, with the release of the iPhone 6.[30]

In September 2014, Transport for London's Tube began accepting contactless payment. The number of completed contactless journeys has now exceeded 300m. On Friday 18 December, the busiest single day in 2015, a record 1.24m journeys were completed by over 500k unique contactless cards.[31]

In 2016 Erste Group launched an NFC-only debit card implemented as a sticker in Austria. It can be used at any NFC supporting terminal for transactions of unlimited amount however for transactions over the floor limit of €25 a PIN is required to confirm the transaction.[32]

In 2019 in the United States, major credit unions, BECU (credit) and PenFed (credit and debit), announced they would begin issuing contactless cards.[33][34] 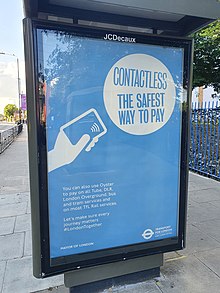 A Transport for London bus stop advertisement recommending contactless payment as safe during the COVID-19 pandemic.

During the COVID-19 pandemic,[35] several banks raised their contactless payment limits.[36][37] In the United Kingdom, the limit was increased from £30 to £45 in March 2020.[38] Contactless payments were recommended as a safer payment method compared to Chip and PIN card payments and cash transactions.[39]

Google Pay is an application for devices running Google's Android OS, which allows users to make purchases using NFC, which initially required a physical secure element but this was replaced by host card emulation which was introduced in Android 4.4 (KitKat). Softcard (formerly known as Isis mobile wallet), Cityzi and Quick Tap wallets for example, use a secure SIM card to store encrypted personal information. Contactless payments with enabled mobile phones still occur on a small scale, but every month an increasing number of mobile phones are certified.[40]

In 2012, Mastercard Advisors wrote that consumers are likely to spend more money using their cards due to the ease of small transactions.[41] Mastercard Canada says it has seen "about 25 percent" higher spending by users of its Mastercard Contactless-brand RFID credit cards.[42]

As of December 2014[update], there are approximately 58 million contactless-enabled cards in use, in the UK, and over 147,000 terminals in use though this is growing in numbers and percentages of adoption.[43][44]

In June 2017, it was reported in UK media that purchases made by card now surpassed those made by cash for the first time. This was reported to have been driven by the rise in contactless payments, which now account for approximately one-third of all card transactions in the UK. The number of payments by this method had increased significantly since the spending limit was raised from £20 to £30.[45] In 2018, contactless payments made up around 19% of transactions in the UK.[46]

In 2018, the Westpac Banking Corporation in Australia revealed contactless payment statistics from 2017 and claimed in the report that contactless payments approached saturation point by being used in over 90% of purchases. The Australian St.George Bank reported 94.6% usage for the same period.[47]

Recent statements by Visa and other US card issuers indicate that they will increase the availability of contactless cards to US consumers in the near future. Visa estimates there will be 300 million contactless cards issued in the US by the end of 2020, up from the predicted 100 million at the end of this year as announced on its 2018 Q4 earnings call.[48]

Telecom operators are starting to get involved in contactless payments via the use of near field communication phones. Belgacom's Pingping, for example, has a stored value account and via a partnership with Alcatel-Lucent's Touchatag provides contactless payment functionalities.

Security researchers have found that the cardholder's name, credit card number, and expiration date may be transmitted by contactless payment cards without encryption. They were able to use information leaked from a contactless credit card to make a purchase online, without opening the envelope in which the card was sent.[49]

Depending on the economic space, there may be a payment limit on single transactions without the need to input the PIN, and some contactless cards can only be used a certain number of times before customers are asked for their PIN.[50] Contactless debit and credit transactions use the same chip and PIN network as older cards and are protected by the same fraud guarantees. Where PIN is supported, the contactless part of the card may remain non-functional until a standard chip and PIN transaction has been executed.[51] This provides some verification that the card was delivered to the actual cardholder.

Under fraud guarantee standards, U.S. banks are liable for any fraudulent transactions charged to the contactless cards.[52]

Retrieved from "http://en.turkcewiki.org/w/index.php?title=Contactless_payment&oldid=970935795"
This website is a mirror of Wikipedia, and is not affiliated with the Wikimedia Foundation.
Categories:
Hidden categories: