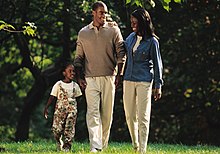 Example of a conjugal family

A conjugal family is a nuclear family that may consist of a married couple and their children (by birth or adoption) or a couple who are unmarried or underage. Conjugal means there is a marriage relationship. The family relationship is principally focused inward and ties to extended kin are voluntary and based on emotional bonds, rather than strict duties and obligations. The spouses and their children are considered to be of prime importance, and other more distant relatives less important. The marriage bond is important and stressed.

Since the notion of "family" has changed over time (for example, increasing acceptance of same-sex parenting, stepfamily, and adoption), the meaning of the term "nuclear family" became muddled (some use it to refer exclusively to opposite-sex parents, while others do not). To combat the ambiguity, the term "conjugal family" was created.

In some cases, both partners have separate lines of income to support the family; in others, only one receives substantial income (colloquially called the "breadwinner") while the other spends more time caring for the family directly (looking after the children, taking care of the home, etc.).

Conjugal family roles have changed over the years. Historically, marriages were exclusively opposite-sex and it was assumed that the male would be the head of the household and provide for the family while the woman would stay in the home and care for the children. However, conjugal roles have evolved over the years; in modern times, same-sex couples are more accepted and in opposite-sex couples, the husband and wife are treated equally.

Retrieved from "http://en.turkcewiki.org/w/index.php?title=Conjugal_family&oldid=912075678"
This website is a mirror of Wikipedia, and is not affiliated with the Wikimedia Foundation.
Categories:
Hidden categories: