Columbia County is a county located in the U.S. state of New York. As of the 2010 census, the population was 63,096.[1] The county seat is Hudson.[2] The name comes from the Latin feminine form of the name of Christopher Columbus, which was at the time of the formation of the county a popular proposal for the name of the United States of America.

At the time of European encounter, the area was occupied by the indigenous Mohican Indians. To the west of the river were the Mohawk and other four tribes of the Iroquois Confederacy, extending past what is now the border of New York state. The first known European exploration of Columbia County was in 1609, when Henry Hudson, an English explorer sailing for the Dutch, ventured up the Hudson River. An accident to his craft forced him to stop at what is now known as Columbia County, and search for food and supplies.[3] In 1612, the Dutch established trading posts and minor settlements, constructing New Amsterdam (today New York City) and Fort Orange (today Albany). Fort Orange became a center of the fur trade with the Mohawk people. Traders began to stop at midway points along the Hudson River, on their travels between New Amsterdam and Fort Orange. Small settlements arose along the river to supply the traders' ships.[3]

In 1649, Dutch colonists purchased land near Claverack and in 1667, more land was purchased.[4] As more Dutch arrived, the region slowly developed. In 1664, the English took over New Netherland and renamed it the Province of New York; they also renamed Fort Orange as Albany.[4]

In the late 17th century, Robert Livingston, a Scots immigrant by way of Rotterdam, built on his connections as Indian agent in the colony and purchased two large portions of land from the Native Americans. He gained much larger grants from the provincial government, for a total of 160,240 acres. He was made lord of the manor by the Crown, with all its perquisites, and started to develop the property with tenant farmers. In 1710, he sold 6,000 acres of his property to Queen Anne of England for use as work camps and resettlement of Palatine German refugees. The Crown had supported their passage to New York, and they were to pay off the costs as indentured labor.[5] Some 1200 Palatine Germans were brought to Livingston Manor (now known as Germantown). New York's Governor Hunter had also helped with these arrangements: the workers were to manufacture naval stores (e.g., pitch, resin, and turpentine) from the pine trees in the Catskill Mountains.

They were promised land for resettlement after completing their terms of indenture.[4] They were refugees from years of religious fighting along the border with France, as well as crop failures from a severe winter.[5] Work camps were established on both sides of the Hudson River. The Germans quickly established Protestant churches at the heart of their community, which recorded their weddings, births and deaths, among the first vital records kept in the colony.[5] 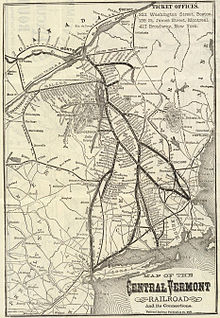 1879 map of the Vermont Central Railway

After many years, some of the colonists were granted land in the frontier of the central Mohawk Valley west of present-day Little Falls in the 100 lots of the Burnetsfield Patent; in the Schoharie Valley, and other areas, such as Palatine Bridge along the Mohawk River west of Schenectady. They were buffer communities between the British settlements and the Iroquois and French (the latter located mostly in Canada.)

Columbia County was formed in 1786 after the American Revolutionary War from portions of Albany County, once a vast area until new communities were developed and jurisdictions were organized. In 1799, the southern boundary of Columbia County was moved southward to include that portion of Livingston Manor located in Dutchess County.

In the nineteenth century, the Vermont Central Railway was constructed to the area. It provided transportation north towards Rutland and Burlington, Vermont, and south towards the major junction town of Chatham, New York, for travel to points west, south and east.

Voters in Columbia County since the mid-19th century have mostly elected Republicans to office. But from 1996 - 2007, new voter registrations by Democrats have outpaced those by Republicans by a margin of 4 to 1.[7] This substantial shift in party affiliation is due in large part to an influx of people from New York City who now live either full or part-time in Columbia County.

Organizations such as "Vote Columbia" have led efforts to have New York City residents, who live in a heavily Democratic Party-controlled area, re-register to vote in their part-time residence of Columbia County, thus influencing the demographic of a lightly populated area that is home to an increasing number of people in weekend houses or retirement.[8] Local residents have expressed dismay that voters who stay in the county only on the weekends are influencing its politics and decisions over development, schools and other issues.[8]

Columbia County is in the southeast central part of New York State, southeast of Albany and immediately west of the Massachusetts border. The western border is the Hudson River.

The terrain is gentle, rolling hills, rising sharply into the Taconic and Berkshire Mountains along the state line. To the west lays the Hudson River and the Catskill Mountains. 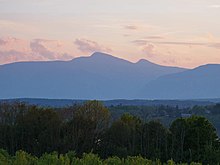 The Catskill Mountains from Olana in southern Columbia County

The highest point is on the Massachusetts state line near the summit of Alander Mountain, at approximately 2,110 feet (643 m) above sea level, in the town of Copake. The lowest point is at or near sea level along the Hudson.

Columbia County is accessible by two limited-access highways. The Taconic State Parkway, which is not accessible to trucks or commercial traffic, runs through the center of the county from south to north, ending at an interchange with Interstate 90 and connecting the county with points south. Columbia County is the last New York county located along eastbound Interstate 90 (and the first county along westbound I-90), which passes through the towns of Canaan and Chatham as the Berkshire Connector portion of the New York Thruway. I-90 has two exits within the county; for the southbound Taconic State Parkway in Chatham, and for NYS Route 22 in Canaan. Depending on precise location within the county, road travel distance to New York City ranges between 96 miles (154 km) and 145 miles (233 km).

Interstate 90 runs east-west through the county. The Taconic State Parkway runs from I-90 south towards Westchester County. The main arterial north-south road, U.S. 9, runs through the larger towns towards the Hudson River.

Amtrak passenger trains of the Empire Service corridor make stops in Hudson. Until 1960s the Penn Central railroad's local service between Albany, NY and Boston, made stops in Chatham. Both the Penn Central's New England States (discontinued, 1967) and Amtrak's Boston-bound section of the Lake Shore Limited, making the same route, have not made stops in Columbia county.

Into the latter 1930s the Rutland Railroad (in map above) operated trains between Bennington, Vermont and Chatham.[19] At Chatham Union Station there were connections to New York Central's Harlem Line to Grand Central Terminal. Penn Central (successor to the New York Central) truncated service on the Harlem Line from Chatham to Dover Plains in 1972.[20]

Retrieved from "http://en.turkcewiki.org/w/index.php?title=Columbia_County,_New_York&oldid=969562424"
This website is a mirror of Wikipedia, and is not affiliated with the Wikimedia Foundation.
Categories:
Hidden categories: