Cohen's kappa coefficient (κ) is a statistic that is used to measure inter-rater reliability (and also Intra-rater reliability) for qualitative (categorical) items.[1] It is generally thought to be a more robust measure than simple percent agreement calculation, as κ takes into account the possibility of the agreement occurring by chance. There is controversy surrounding Cohen's kappa due to the difficulty in interpreting indices of agreement. Some researchers have suggested that it is conceptually simpler to evaluate disagreement between items.[2] See the Limitations section for more detail.

The seminal paper introducing kappa as a new technique was published by Jacob Cohen in the journal Educational and Psychological Measurement in 1960.[5]

Cohen's kappa measures the agreement between two raters who each classify N items into C mutually exclusive categories. The definition of

where po is the relative observed agreement among raters (identical to accuracy), and pe is the hypothetical probability of chance agreement, using the observed data to calculate the probabilities of each observer randomly seeing each category. If the raters are in complete agreement then

. If there is no agreement among the raters other than what would be expected by chance (as given by pe),

. It is possible for the statistic to be negative,[6] which implies that there is no effective agreement between the two raters or the agreement is worse than random.

For k categories, N observations to categorize and

the number of times rater i predicted category k:

This is derived from the following construction:

is the estimated probability that both rater 1 and rater 2 will classify the same item as k, while

is the estimated probability that rater 1 will classify an item as k (and similarly for rater 2). The relation

is based on using the assumption that the rating of the two raters are independent. The term

) divided by the total items to classify (

(and similarly for rater 2).

Suppose that you were analyzing data related to a group of 50 people applying for a grant. Each grant proposal was read by two readers and each reader either said "Yes" or "No" to the proposal. Suppose the disagreement count data were as follows, where A and B are readers, data on the main diagonal of the matrix (a and d) count the number of agreements and off-diagonal data (b and c) count the number of disagreements:

The observed proportionate agreement is:

To calculate pe (the probability of random agreement) we note that:

So the expected probability that both would say yes at random is:

Overall random agreement probability is the probability that they agreed on either Yes or No, i.e.:

So now applying our formula for Cohen's Kappa we get:

A case sometimes considered to be a problem with Cohen's Kappa occurs when comparing the Kappa calculated for two pairs of raters with the two raters in each pair having the same percentage agreement but one pair give a similar number of ratings in each class while the other pair give a very different number of ratings in each class.[7] (In the cases below, notice B has 70 yeses and 30 nos, in the first case, but those numbers are reversed in the second.) For instance, in the following two cases there is equal agreement between A and B (60 out of 100 in both cases) in terms of agreement in each class, so we would expect the relative values of Cohen's Kappa to reflect this. However, calculating Cohen's Kappa for each:

P-value for kappa is rarely reported, probably because even relatively low values of kappa can nonetheless be significantly different from zero but not of sufficient magnitude to satisfy investigators.[8]:66 Still, its standard error has been described[9] and is computed by various computer programs.[10]

Confidence intervals for Kappa may be constructed, for the expected Kappa values if we had infinite number of items checked, using the following formula:[1]

is the standard normal percentile when

This is calculated by ignoring that pe is estimated from the data, and by treating po as an estimated probability of a binomial distribution while using asymptotic normality (i.e.: assuming that the number of items is large and that po is not close to either 0 or 1).

(and the CI in general) may also be estimated using bootstrap methods. 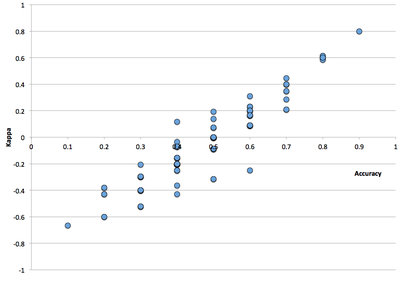 Kappa (vertical axis) and Accuracy (horizontal axis) calculated from the same simulated binary data. Each point on the graph is calculated from a pairs of judges randomly rating 10 subjects for having a diagnosis of X or not. Note in this example a Kappa=0 is approximately equivalent to an accuracy=0.5

If statistical significance is not a useful guide, what magnitude of kappa reflects adequate agreement? Guidelines would be helpful, but factors other than agreement can influence its magnitude, which makes interpretation of a given magnitude problematic. As Sim and Wright noted, two important factors are prevalence (are the codes equiprobable or do their probabilities vary) and bias (are the marginal probabilities for the two observers similar or different). Other things being equal, kappas are higher when codes are equiprobable. On the other hand, Kappas are higher when codes are distributed asymmetrically by the two observers. In contrast to probability variations, the effect of bias is greater when Kappa is small than when it is large.[11]:261–262

Another factor is the number of codes. As number of codes increases, kappas become higher. Based on a simulation study, Bakeman and colleagues concluded that for fallible observers, values for kappa were lower when codes were fewer. And, in agreement with Sim & Wrights's statement concerning prevalence, kappas were higher when codes were roughly equiprobable. Thus Bakeman et al. concluded that "no one value of kappa can be regarded as universally acceptable."[12]:357 They also provide a computer program that lets users compute values for kappa specifying number of codes, their probability, and observer accuracy. For example, given equiprobable codes and observers who are 85% accurate, value of kappa are 0.49, 0.60, 0.66, and 0.69 when number of codes is 2, 3, 5, and 10, respectively.

Nonetheless, magnitude guidelines have appeared in the literature. Perhaps the first was Landis and Koch,[13] who characterized values < 0 as indicating no agreement and 0–0.20 as slight, 0.21–0.40 as fair, 0.41–0.60 as moderate, 0.61–0.80 as substantial, and 0.81–1 as almost perfect agreement. This set of guidelines is however by no means universally accepted; Landis and Koch supplied no evidence to support it, basing it instead on personal opinion. It has been noted that these guidelines may be more harmful than helpful.[14] Fleiss's[15]:218 equally arbitrary guidelines characterize kappas over 0.75 as excellent, 0.40 to 0.75 as fair to good, and below 0.40 as poor.

Kappa assumes its theoretical maximum value of 1 only when both observers distribute codes the same, that is, when corresponding row and column sums are identical. Anything less is less than perfect agreement. Still, the maximum value kappa could achieve given unequal distributions helps interpret the value of kappa actually obtained. The equation for κ maximum is:[16]

are the row probabilities, and

are the column probabilities. 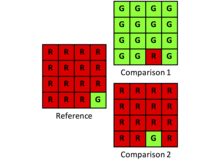 Here, reporting quantity and allocation disagreement is informative while Kappa obscures information. Furthermore, Kappa introduces some challenges in calculation and interpretation because Kappa is a ratio. It is possible for Kappa's ratio to return an undefined value due to zero in the denominator. Furthermore, a ratio does not reveal its numerator nor its denominator. It is more informative for researchers to report disagreement in two components, quantity and allocation. These two components describe the relationship between the categories more clearly than a single summary statistic. When predictive accuracy is the goal, researchers can more easily begin to think about ways to improve a prediction by using two components of quantity and allocation, rather than one ratio of Kappa.[2]

For a measure of difference between two continuous variables, see Mean absolute error.

Some researchers have expressed concern over κ's tendency to take the observed categories' frequencies as givens, which can make it unreliable for measuring agreement in situations such as the diagnosis of rare diseases. In these situations, κ tends to underestimate the agreement on the rare category.[17] For this reason, κ is considered an overly conservative measure of agreement.[18] Others[19][citation needed] contest the assertion that kappa "takes into account" chance agreement. To do this effectively would require an explicit model of how chance affects rater decisions. The so-called chance adjustment of kappa statistics supposes that, when not completely certain, raters simply guess—a very unrealistic scenario.

A similar statistic, called pi, was proposed by Scott (1955). Cohen's kappa and Scott's pi differ in terms of how pe is calculated.

Note that Cohen's kappa measures agreement between two raters only. For a similar measure of agreement (Fleiss' kappa) used when there are more than two raters, see Fleiss (1971). The Fleiss kappa, however, is a multi-rater generalization of Scott's pi statistic, not Cohen's kappa. Kappa is also used to compare performance in machine learning, but the directional version known as Informedness or Youden's J statistic is argued to be more appropriate for supervised learning.[20]

The weighted kappa allows disagreements to be weighted differently[21] and is especially useful when codes are ordered.[8]:66 Three matrices are involved, the matrix of observed scores, the matrix of expected scores based on chance agreement, and the weight matrix. Weight matrix cells located on the diagonal (upper-left to bottom-right) represent agreement and thus contain zeros. Off-diagonal cells contain weights indicating the seriousness of that disagreement. Often, cells one off the diagonal are weighted 1, those two off 2, etc.

The equation for weighted κ is:

where k=number of codes and

are elements in the weight, observed, and expected matrices, respectively. When diagonal cells contain weights of 0 and all off-diagonal cells weights of 1, this formula produces the same value of kappa as the calculation given above.

Retrieved from "http://en.turkcewiki.org/w/index.php?title=Cohen%27s_kappa&oldid=962463885"
This website is a mirror of Wikipedia, and is not affiliated with the Wikimedia Foundation.
Categories:
Hidden categories: