The cobra effect occurs when incentives designed to solve a problem end up rewarding people for making it worse.[1][2] The term is used to illustrate how incorrect stimulation in economics and politics can cause unintended consequences.[2] 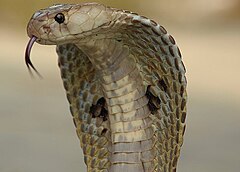 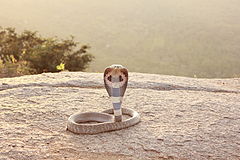 Another photo with the Indian Cobra in an attack position.

The term cobra effect originated in an anecdote that describes an occurrence during India under British rule. The British government was concerned about the number of venomous cobras in Delhi.[3] The government therefore offered a bounty for every dead cobra. Initially, this was a successful strategy; large numbers of snakes were killed for the reward. Eventually, however, enterprising people began to breed cobras for the income. When the government became aware of this, the reward program was scrapped. When cobra breeders set their now-worthless snakes free, the wild cobra population further increased.[2][4]

A similar incident occurred in Hanoi, Vietnam, under French colonial rule. In 1902, the colonial government created a bounty program that paid a reward for each rat killed.[3] To collect the bounty, people would need to provide the severed tail of a rat.

Colonial officials, however, began noticing rats in Hanoi with no tails. The Vietnamese rat catchers would capture rats, sever their tails, and then release them back into the sewers so that they could procreate and produce more rats, thereby increasing the rat catchers' revenue.[5]

The UN Intergovernmental Panel on Climate Change kicked off an incentive scheme in 2005 to cut down on greenhouse gases. Companies disposing of polluting gases get rewarded with carbon credits, which could eventually get converted into cash. The program set prices according to how serious the damage the pollutant could do to the environment was, and attributed one of the highest bounties for destroying HFC-23, a byproduct of a common coolant. As a result, companies began to produce more of this coolant in order to destroy more of the byproduct waste gas, and collect millions of dollars in credits.[6] Credits for the destruction of HFC-23 were suspended in the European Union in 2013.[7]

In the Autobiography of Mark Twain, the author says that his wife had a similar experience,

Once in Hartford the flies were so numerous for a time, and so troublesome, that Mrs. Clemens conceived the idea of paying George a bounty on all the flies he might kill. The children saw an opportunity here for the acquisition of sudden wealth. ... Any Government could have told her that the best way to increase wolves in America, rabbits in Australia, and snakes in India, is to pay a bounty on their scalps. Then every patriot goes to raising them.

Retrieved from "http://en.turkcewiki.org/w/index.php?title=Cobra_effect&oldid=994609661"
This website is a mirror of Wikipedia, and is not affiliated with the Wikimedia Foundation.
Categories:
Hidden categories: