Cliometrics (/ˌklaɪ.oʊəˈmɛt.rɪks/, also /ˌkliːoʊˈmɛt.rɪks/), sometimes called new economic history[1] or econometric history,[2] is the systematic application of economic theory, econometric techniques, and other formal or mathematical methods to the study of history (especially social and economic history).[3] It is a quantitative approach to economic history (as opposed to qualitative or ethnographic).[4] 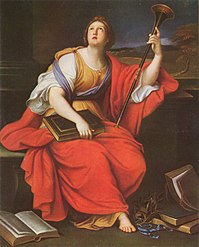 The new economic history originated in 1958 with The Economics of Slavery in the Antebellum South by American economists Alfred H. Conrad and John R. Meyer. The book would cause a firestorm of controversy with its claim, based on statistical data, that slavery would not have ended in the absence of the U.S. Civil War, as the practice was economically efficient and highly profitable for slaves owners.[4][7]

The term cliometrics—which from Clio, who was the muse of history—was originally coined by mathematical economist Stanley Reiter in 1960.[8] Cliometrics became better known when Douglass North and William Parker became the editors of the Journal of Economic History in 1960. The Cliometrics Meetings also began to be held around this time at Purdue University and are still held annually in different locations.

North, a professor at Washington University in St. Louis, would go on to win the Nobel Memorial Prize in Economic Sciences in October 1993 along with Robert William Fogel, himself often described as the father of modern econometric history and Neo-historicals.[9][10] The two were honoured "for having renewed research in economic history;" the Academy noted that "they were pioneers in the branch of economic history that has been called the 'new economic history,' or cliometrics."[9] Fogel and North received the prize for turning the theoretical and statistical tools of modern economics on the historical past: on subjects ranging from slavery and railroads to ocean shipping and property rights. North was heralded as a pioneer in the "new" institutional history. In the Nobel announcement,[9][11] specific mention was made of a 1968 paper on ocean shipping, in which North showed that organizational changes played a greater role in increasing productivity than did technological change.[12] Fogel is especially noted for using careful empirical work to overturn conventional wisdom.

Cliometrics would be introduced to Germany by American-born and -educated Richard H. Tilly in the 1970s.[16] The Cliometric Society, a group to encourage and further the study of cliometrics, was founded in 1983.

Cliometrics has had sharp critics. Francesco Boldizzoni summarized a common critique by arguing that cliometrics is based on the false assumption that the laws of neo-classical economics always apply to human activity. Those laws, he says, are based on rational choice and maximization as they operate in well-developed markets, and do not apply to economies other than those of the capitalist West in the modern era. Instead, Boldizzoni argues that the workings of economies are determined by social, political and cultural conditions specific to each society and time period.[17]

On the other hand, Claude Diebolt (2016) argued that cliometrics is mature and well accepted by scholars as an "indispensable tool" in economic history.[18] He says most scholars agree that economic theory, combined with new data as well as historical and statistical methods are necessary to formulate problems precisely, to draw conclusions from postulates and to gain insight into complicated processes. At the applied level, cliometrics is accepted as the way to measure variables and estimate parameters.[19]

A criticism of Cliometrics by Joseph T. Salerno, based on the perspective of the Austrian School of economics, especially that of Ludwig von Mises, can be found in his Introduction to Murray N. Rothbard's A History of Money and Banking in the United States.[20]

Cliodynamics, unlike cliometrics, maintains a close relationship with the natural sciences, often employing dominant methods from the natural sciences such as differential-equation models, power-law relations, and agent-based models. Evolutionary game theory and social network analysis are also frequently employed by cliodynamicists, but not cliometricians. Cliodynamicists also tend to include factors associated with ecological context and biological determinants in their models.[21]

Retrieved from "http://en.turkcewiki.org/w/index.php?title=Cliometrics&oldid=971609655"
This website is a mirror of Wikipedia, and is not affiliated with the Wikimedia Foundation.
Categories:
Hidden categories: