Cirrus Logic Inc. is a fabless semiconductor supplier that specializes in analog, mixed-signal, and audio DSP integrated circuits (ICs).[2] Since 1998, the company's headquarters have been in Austin, Texas.[2][3]

Dr. Suhas Patil founded the company as "Patil Systems, Inc." in Salt Lake City in 1981; it adopted the name "Cirrus Logic" when it moved to Silicon Valley in 1984.

Patil Systems, Inc., was founded in Salt Lake City, UT, in 1981 by Dr. Suhas Patil, and in 1983 the company was reorganized by Dr. Patil, Kamran Elahian, and venture capitalist Fred Nazem, whose firm, Nazem and Company provided the company's first/start-up round of financing. Later the company was renamed as Cirrus Logic when it moved to Silicon Valley in 1984 to focus on solutions for the growing PC components market. Michael Hackworth was named president and chief executive officer in January 1985, and served as CEO until February 1999. It joined the Nasdaq market listing in 1989 (symbol: CRUS). Cirrus Logic acquired Crystal Semiconductor, a supplier of analog and mixed-signal converter ICs, in 1991. In the early 1990s, Cirrus Logic became a supplier of PC graphics chips, audio converters and chips for magnetic storage products. David D. French joined Cirrus Logic, Inc. as president and chief operating officer in June 1998 and was named chief executive officer in February 1999. Soon after joining the company, through an acquisition strategy Mr. French repositioned the company into a premier supplier of high-performance analog and digital processing chip solutions for consumer entertainment electronics, and soon afterwards, Mr. M. Yousuf Palla joined as Vice President of Operations and Manufacturing, contributing further to its success. The company announced in April 2000 that it had completed moving its headquarters to Austin, Texas.[5] In June 2005, Cirrus Logic sold its video products operation to an investment firm, creating privately owned Magnum Semiconductor. After French resigned in March 2007, Jason Rhode, formerly the vice president and general manager of Cirrus Logic's Mixed Signal Audio Division, was named president and CEO in May 2007. In 2014 Cirrus Logic bought Wolfson Microelectronics for approximately $467 million.

In the early 1990s, Cirrus Logic was a supplier of low-cost PC graphics chips. Cirrus's Microsoft Windows 2D GUI accelerators (GDI) were among the fastest in the low-end market-segment, outperforming competing VGA chips from Oak Technologies, Trident Microsystems, and Paradise (Western Digital).[citation needed] For example, the Cirrus GD5422 (1992) supported hardware acceleration for both 8-bit color and 16-bit color. It was one of the lowest-priced SVGA controllers to support both.

By the mid-1990s, when PCs had migrated to the PCI bus, Cirrus had fallen behind S3 and Trident Microsystems. When the announced release date of the GD5470 "Mondello" came and went, Cirrus's reputation in desktop PC-graphics suffered.[citation needed] Mondello development took a back seat to the GD5464 which was near completion and proved to be a much faster design with the use of Rambus. (Because of this Mondello never got off the ground.)

The company's final graphics chips, the GD546x "Laguna" series of PCI/AGP 3D-accelerators, were novel in that they were one of the few video cards to use Rambus RDRAM. The patented use of tiled memory by the GD546x chips is still used by nearly all graphics processors today. However, like many other 2D and 3D chips at the time were gate limited by the process technology available at the time, the feature set of perspective-correct texture mapping, bilinear filtering, single-pass lighting, gouraud shading, and alpha blending, was incomplete compared to the next generation of 3D chips. The GD546x family was limited by CPU processing at the time, CPUs could not feed it enough triangles which was the real performance block. The raw processing power of the GD546x was nearly 2.5 million 25 pixel triangles per second, much faster than competitors.

When Intel announced they were entering the 3D market with the i740, Cirrus Logic exited the market, which at the time for Cirrus Logic was worth 500 million dollars annually. (Intel didn't catch up in performance for many years, the i740 was not widely accepted and did not win any major designs). 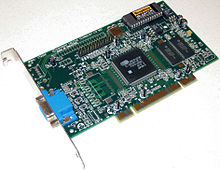 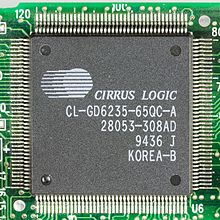 Retrieved from "http://en.turkcewiki.org/w/index.php?title=Cirrus_Logic&oldid=937556188"
This website is a mirror of Wikipedia, and is not affiliated with the Wikimedia Foundation.
Categories:
Hidden categories: