Circadian rhythm sleep disorders (CRSD), also known as circadian rhythm sleep-wake disorders (CRSWD), are a family of sleep disorders which affect the timing of sleep. CRSDs arise from a persistent pattern of sleep/wake disturbances that can be caused either by dysfunction in one's biological clock system, or by misalignment between one's endogenous oscillator and externally imposed cues. As a result of this mismatch, those affected by circadian rhythm sleep disorders have a tendency to fall asleep at unconventional time points in the day. These occurrences often lead to recurring instances of disturbed rest, where individuals affected by the disorder are unable to go to sleep and awaken at "normal" times for work, school, and other social obligations.

Humans, like most living organisms, have various biological rhythms. These biological clocks control processes that fluctuate daily (e.g. body temperature, alertness, hormone secretion), generating circadian rhythms. Among these physiological characteristics, our sleep-wake propensity can also be considered one of the daily rhythms regulated by the biological clock system. Our sleeping cycles are tightly regulated by a series of circadian processes working in tandem, which allow us to experience moments of consolidated sleep during the night and a long wakeful moment during the day. Conversely, disruptions to these processes and the communication pathways between them can lead to problems in sleeping patterns, which are collectively referred to as circadian rhythm sleep disorders.

A circadian rhythm is an entrainable, endogenous, biological activity that has a period of roughly twenty-four hours. This internal time-keeping mechanism is centralized in the suprachiasmatic nucleus (SCN) of humans and allows for the internal physiological mechanisms underlying sleep and alertness to become synchronized to external environmental cues, like the light-dark cycle.[1] The SCN also sends signals to peripheral clocks in other organs, like the liver, to control processes such as glucose metabolism.[2] Although these rhythms will persist in constant light or dark conditions, different Zeitgebers (time givers such as the light-dark cycle) give context to the clock and allow it to entrain and regulate expression of physiological processes to adjust to the changing environment. Genes that help control light-induced entrainment include positive regulators BMAL1 and CLOCK and negative regulators PER1 and CRY.[3] A full circadian cycle can be described as a twenty-four hour circadian day, where circadian time zero (CT 0) marks the beginning of a subjective day for an organism and CT 12 marks the start of subjective night.[4]

Humans with regular circadian function have been shown to maintain regular sleep schedules, regulate daily rhythms in hormone secretion, and sustain oscillations in core body temperature.[5] Even in the absence of Zeitgebers, humans will continue to maintain a roughly 24-hour rhythm in these biological activities. Regarding sleep, normal circadian function allows people to maintain balance rest and wakefulness that allows people to work and maintain alertness during the day's activities, and rest at night.[6]

Some misconceptions regarding circadian rhythms and sleep commonly mislabel irregular sleep as a circadian rhythm sleep disorder. In order to be diagnosed with CRSD, there must be either a misalignment between the timing of the circadian oscillator and the surrounding environment, or failure in the clock entrainment pathway.[7] Among people with typical circadian clock function, there is variation in chronotypes, or preferred wake and sleep times, of individuals. Although chronotype varies from individual to individual, as determined by rhythmic expression of clock genes, people with typical circadian clock function will be able to entrain to environmental cues. For example, if a person wishes to shift the onset of a biological activity, like waking time, light exposure during the late subjective night or early subjective morning can help advance one's circadian cycle earlier in the day, leading to an earlier wake time.[8]

The International Classification of Sleep Disorders classifies Circadian Rhythm Sleep Disorder as a type of sleep dyssomnia. Although studies suggest that 3% of the adult population suffers from a CRSD, many people are often misdiagnosed with insomnia instead of a CRSD. Of adults diagnosed with sleep disorders, an estimated 10% have a CRSD and of adolescents with sleep disorders, an estimated 16% may have a CRSD.[9] Patients diagnosed with circadian rhythm sleep disorders typically express a pattern of disturbed sleep, whether that be excessive sleep that intrudes on working schedules and daily functions, or insomnia at desired times of sleep. Note that having a preference for extreme early or late wake times are not related to a circadian rhythm sleep disorder diagnosis. There must be distinct impairment of biological rhythms that affects the person's desired work and daily behavior. For a CRSD diagnosis, a sleep specialist gathers the history of a patient's sleep and wake habits, body temperature patterns, and dim-light melatonin onset (DLMO).[9] Gathering this data gives insight into the patient's current schedule as well as the physiological phase markers of the patient's biological clock.

The start of the CRSD diagnostic process is a thorough sleep history assessment. A standard questionnaire is used to record the sleep habits of the patient, including typical bedtime, sleep duration, sleep latency, and instances of waking up. The professional will further inquire about other external factors that may impact sleep. Prescription drugs that treat mood disorders like tricyclic antidepressants, selective serotonin reuptake inhibitors and other antidepressants are associated with abnormal sleep behaviors. Other daily habits like work schedule and timing of exercise are also recorded because they may impact an individual's sleep and wake patterns. To measure sleep variables candidly, patients wear actigraphy watches that record sleep onset, wake time, and many other physiological variables. Patients are similarly asked to self-report their sleep habits with a week-long sleep diary to document when they go to bed, when they wake up, etc. to supplement the actigraphy data. Collecting this data allows sleep professionals to carefully document and measure patient's sleep habits and confirm patterns described in their sleep history.[9]

Other additional ways to classify the nature of a patient's sleep and biological clock are the morningness-eveningness questionnaire (MEQ) and the Munich ChronoType Questionnaire, both of which have fairly strong correlations with accurately reporting phase advanced or delayed sleep.[8] Questionnaires like the Pittsburgh Sleep Quality Index (PSQI) and the Insomnia Severity Index (ISI) help gauge the severity of sleep disruption. Specifically, these questionnaires can help the professional assess the patient's problems with sleep latency, undesired early-morning wakefulness, and problems with falling or staying asleep.[9] 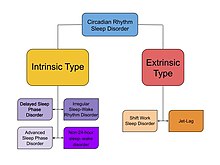 CRSDs can be categorized into two groups based on their underlying mechanisms: The first category is composed of disorders where the endogenous oscillator has been altered, known as intrinsic type disorders. This category will be referred to as the intrinsic disorder type. The second category consists of disorders in which the external environment and the endogenous circadian clock are misaligned, called extrinsic type CRSDs.

CRSD has been frequently associated with excessive daytime sleepiness and nighttime insomnia in patients diagnosed with Alzheimer's disease (AD), representing a common characteristic among AD patients as well as a risk factor of progressive functional impairments.[13][14][15] On one hand, it has been stated that people with AD have melatonin alteration and high irregularity in their circadian rhythm that lead to a disrupted sleep-wake cycle, probably due to damage on hypothalamic SCN regions typically observed in AD.[14][15] On the other hand, disturbed sleep and wakefulness states have been related to worsening of an AD patient's cognitive abilities, emotional state and quality of life.[13][14][15] Moreover, the abnormal behavioural symptoms of the disease negatively contribute to overwhelming patient's relatives and caregivers as well.[13][14]

However, the impact of sleep-wake disturbances on the subjective experience of a person with AD is not yet fully understood.[14] Therefore, further studies exploring this field have been highly recommended, mainly considering the increasing life expectancy and significance of neurodegenerative diseases in clinical practices.[15]

Retrieved from "http://en.turkcewiki.org/w/index.php?title=Circadian_rhythm_sleep_disorder&oldid=960935521"
This website is a mirror of Wikipedia, and is not affiliated with the Wikimedia Foundation.
Categories:
Hidden categories: