Christianity in Albania was established throughout the country in 325 AD. From 1100 AD, the Byzantine Empire carried out Church missions in the area. In relation to the increasing influence of Venice, the Franciscans started to settle down in the area in the 13th century. From the 15th century to the 19th century, under the rule of the Ottoman Empire, Christianity was replaced by Islam as the majority religion in Albania dring the Ottoman Empire. The Albanian government gives the percentages of religious affiliations with only 58% Muslim, 10% Eastern Orthodox, 7% Catholic and 15% atheist or nonreligious since the fall of Communism in 1991, yet the 2011 census did not get most of the population due to poor counting of the population and the inability to reach most citizens.[1] In the 2011 census the declared religious affiliation of the population was: 58.7% Muslims, 13.79% undeclared, 15.03% Catholics, 21.75% Orthodox believers, 5.49% other, 2.5% atheists, 2.09% Bektashis and 0.14% other Christians.[2] However, due to the low number of people actually reached during the collection of data for the census, especially in Catholic and Orthodox regions, this census can be viewed as not wholly accurate.

A 2015 study estimated some 13,000 conversions to Christianity from Muslim backgrounds.[3]

According to the numbers given by the government in 2010 it was stated that Eastern Orthodoxy was practiced by about 20% of Albanians within Albania.[1] In the 2011 census the percentage of Orthodox believers was listed as 6.75% of the population.[2] However the census was poorly conducted and the population of Orthodox believers has recently increased to 28.4%.[citation needed] Albania is historically linked with both the Catholic Church and Eastern Orthodoxy. Albanians were among the first peoples of the region to receive missionaries and convert to Christianity. With the split of the Church in 1054, Orthodoxy become the religion for the Albanians inhabiting the areas under the Byzantine rule.

The first Orthodox liturgy in the Albanian language was held not in Albania, but in Pennsylvania and Massachusetts. Subsequently, when the Orthodox Church wasn't allowed an official existence in communist Albania, Albanian Orthodoxy survived in exile in Philadelphia with the church in Philadelphia being founded in 1913 and in Boston in 1965. Adherents of the Albanian Orthodox Church have been increasing in Albania since 1991 from a weak presence to 28.4% of the population in 2011. 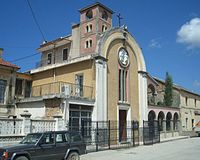 The Catholic Church in Albania is part of the worldwide Catholic Church, under the spiritual leadership of the Pope in Rome. According to the numbers given by the government in 2011 it was stated that around 10.03% of the religious population is Catholic,[1] however new government figures reveal the percentage of Catholics is 21.3 [2] There are five dioceses in the country, including two archdioceses plus an Apostolic Administration covering southern Albania.

Prior to the Ottoman invasion Christianity was the religion of all Albanians. The northern Albanians adhered to Catholicism, whilst in the south they were followers of Eastern Orthodoxy.[4][5]

Protestants in Albania, stand at about 8,000,[6] whereas 189 different Protestant associations including the Albanian Evangelical Alliance (VUSH) exist in Albania.[7] 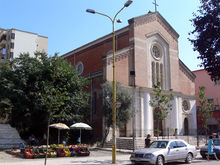 One of Tirana's Catholic churches.

Retrieved from "http://en.turkcewiki.org/w/index.php?title=Christianity_in_Albania&oldid=963119424"
This website is a mirror of Wikipedia, and is not affiliated with the Wikimedia Foundation.
Categories:
Hidden categories: