It is used mostly by library systems.[2][3] It is one of the earliest established and most sophisticated encodings for Traditional Chinese (predating the establishment of Big5 in 1984 and CNS 11643 in 1986).[2] It is distinguished by its unique system for encoding simplified versions and other variants of its main set of hanzi characters.[1]

A variant of an earlier version of CCCII is used by the Library of Congress as part of MARC-8, under the name East Asian Character Code (EACC, ANSI/NISO Z39.64),[4] where it comprises part of MARC 21's JACKPHY support. However, EACC contains fewer characters than the most recent versions of CCCII.[5][1] 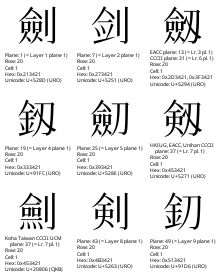 Nine characters from CCCII or EACC implementations, which are encoded as variants of 劍 (double-edged sword). The ninth of these, 釖, is usually a variant of 刀.[6]

CCCII is designed as an 94n set, as defined by ISO/IEC 2022.[1] Each Chinese character is represented by a 3-byte code in which each byte is 7-bit, between 0x21 and 0x7E inclusive. Thus, the maximum number of Chinese characters representable in CCCII is 94×94×94 = 830584. In practice the number of characters encodable by CCCII would be less than this number, because variant characters are encoded in related ISO 2022 planes under CCCII, so most of the code points would have to be reserved for variants.

CCCII/EACC is not registered in the International Registry of Coded Character Sets to be Used with Escape Sequences,[10] and as such, does not have a standard designation escape for use with ISO 2022. MARC-8 assigns EACC the private-use F-byte 0x31 (1) in its implementation of ANSI X3.41 (ISO 2022).[11]

The 94 ISO 2022 planes are grouped into 16 layers of 6 planes each (except for layer 16, which contains the four planes 91–94).[1] Layer 1 contains both non-hanzi and hanzi characters, with the non-hanzi and most frequently used hanzi being placed in plane 1, and with the remaining five planes consisting of less common hanzi.[1] Layer 2 contains Simplified Chinese characters, with their row and cell numbers being the same as their Traditional Chinese equivalents in layer 1. Layers 3 through 12 contain further variant forms, at row and cell numbers homologous to the first two layers.[12]

This distinctive design has been criticised by Christian Wittern of the International Research Institute for Zen Buddhism at Hanazono University, who asserts that the relationship of character variants "is very complex and can not be expressed in a fixed, one-dimensional, hard-wired codetable".[3] Ken Lunde describes it as "one of the most well thought-out character set standards from Taiwan", describing its structure as "to be truly admired", but concluding that OpenType variant form substitution can provide the same level of functionality.[1]

As of 1995, CCCII or EACC was used mostly in libraries in the United States, Hong Kong and Taiwan. Although CCCII promised pan-CJK coverage, its support was limited to specialised hardware; difficulty ascertaining when the root versus variant character should be used, exacerbated by a lack of firmly established reference glyphs, further limited its adoption, resulting in Big5 being more commonly used for Chinese in those territories outside of library use (since Unicode had yet to become widely adopted at the time).[3]

As of 2009[update], EACC is still in extensive use for specialized bibliographic purposes.[1] It was also an important precursor to Unicode.[1] Unicode hanzi characters are referenced to their corresponding CCCII and EACC codes in the Unihan database, in the keys kCCCII and kEACC.[4] Mapping tables for hanzi, hangul, kana and punctuation between EACC and Unicode are available from the Library of Congress.[13]

Following are charts for punctuation, symbols, kana and Hangul jamo, showing the characters and giving possible Unicode mappings. Where possible, these are referenced against published mapping data.

Unicode mappings for Hangul syllables are omitted for brevity, but may also be obtained from the Library of Congress.[14] CCCII hanzi number in the tens of thousands[1][3] and are not shown below (except where they are also included in the non-hanzi range, as radicals or numerals), but mappings to Unicode are available from the Unihan database[4] and from elsewhere.[9][8]

Although CCCII is usually a 94n set,[1] and therefore does not usually use codes starting with 0x2120,[9] the following layout is used by a variant used by libraries in Hong Kong:[8]

No characters are assigned in plane 1 row 1, which is reserved for control codes.[1]

This row contains mathematical operators. EACC leaves this row empty.[13] The following table is referenced against sources from Taiwan.[2][9]

The following table is referenced against CCCII data provided by the Hong Kong Innovative Users Group, a group of libraries in Hong Kong, and hosted by the University of Hong Kong.[16][8] It uses an entirely different layout in this row:

In EACC, this row includes several Private Use Area mapped characters used internally to represent character components by the RLIN input method,[17] which is used by the Library of Congress for non-Roman cataloging.[18] These component characters should only be used internally by an IME and, if encountered elsewhere, may be replaced with the geta mark (U+3013),[17] which this row also includes at 0x212A46. This row is unassigned in CCCII,[1] but the geta mark is also listed at that location in some mappings for CCCII.[9]

A variant used by libraries in Hong Kong does not include bopomofo characters in plane 1 row 15, but includes them in a different layout in plane 7.[8]

This row is in plane 73, the first plane of layer 13, which contains characters included for Japanese language support.[12] It contains punctuation.[7] Compare row 1 of JIS X 0208, which this row tends to follow the layout of for the characters it includes.

This row contains katakana. Compare row 5 of JIS X 0208, which this row corresponds to, besides the addition of the separate dakuten and handakuten.

This row contains several historic Hangul characters no longer in regular use. Several of these are mapped to the Private Use Area.[17]

Retrieved from "http://en.turkcewiki.org/w/index.php?title=Chinese_Character_Code_for_Information_Interchange&oldid=972339118"
This website is a mirror of Wikipedia, and is not affiliated with the Wikimedia Foundation.
Categories:
Hidden categories: