The functions of the Chief Executive (CE) include nominating principal officials for appointment by the Central People's Government of China (State Council), which is headed by the Premier, conducting foreign relations, appointing judges and other public officers, giving consent to legislation passed by the Legislative Council, and bestowing honours. The Basic Law grants the Chief Executive a wide range of powers, but obliges him or her, before making important policy decisions, introducing bills to the Legislative Council, making subsidiary legislation, and dissolving the Legislative Council, to act only after consultation with the Executive Council (all of whose members are the CE's own appointees).[4] The Executive Council consists of official and non-official members, including the Chief Secretary for Administration, the most senior official and head of the Government Secretariat, in charge of overseeing the administration of the Government.

The Chief Executive holds the title "The Honourable", and ranks first in the Hong Kong order of precedence.[5] The official residence of the chief executive is Government House in Central, Hong Kong Island.

The current Chief Executive is Carrie Lam, who was selected on 26 March 2017, appointed by the Central People's Government with the State Council Decree signed by Premier Li Keqiang, on 11 April 2017 and took office on 1 July 2017. She is the first woman to serve as Chief Executive.[6]

According to Article 44 of the Basic Law, the Chief Executive must be a Chinese citizen as defined by the HKSAR Passports Ordinance.[7][8] The individual must be at least 40 years old, a Hong Kong permanent resident who is a Chinese citizen with right of abode in Hong Kong, and has ordinarily resided in Hong Kong for a continuous period of not less than 20 years.[7] Article 47 further requires that the Chief Executive be a person of integrity, dedicated to his or her duties.[7] In addition, since the 4th Chief Executive term, candidates may not stand for selection by the Election Committee without first obtaining 150 nominations from its members.

The Chief Executive is elected from a restricted pool of candidates supportive of the Central Government by a 1200-member Election Committee, an electoral college consisting of individuals (i.e. private ) and bodies (i.e. special interest groups) selected or elected within 28 functional constituencies, as prescribed in Annex I to the Basic Law. In the first election of the Chief Executive, the Committee consisted of only 400 members. It was expanded to 800 for the second term.[9][10] As a result of enabling legislation stemming from a public consultation in 2010,[11] and its approval by the National People's Congress Standing Committee in Beijing, the number of representatives was increased from 800 to 1200.[12]

The functional constituencies correspond to various sectors of the economy and society, each of which hold their own internal procedures to select electors. The chosen Chief Executive must be appointed by the Central People's Government (People's Republic of China) before taking office.

Under the Basic Law the Chief Executive is the chief representative of the people of Hong Kong and is the head of the government of Hong Kong. The CE's powers and functions include leading the government, implementing the law, signing bills and budgets passed by the Legislative Council, deciding on government policies, advising appointment and dismissal of principal officials of the Government of Hong Kong to the Central People's Government (State Council), appointing judges and holders of certain public offices and to pardon or commute sentences. The position is also responsible for the policy address made to the public.

The CE's powers and functions are established by Article 48 of the Basic Law.

Article 52 stipulates circumstances under which the Chief Executive must resign. Examples include the loss of ability to discharge his or her duties or refusal to sign a bill passed by a two-thirds majority of the Legislative Council.[7]

The acting and succession line is spelled out in Article 53. If the Chief Executive is not able to discharge his or her duties for short periods (such as during overseas visits), the duties would be assumed by the Chief Secretary for Administration, the Financial Secretary or the Secretary for Justice, by rotation, in that order, as acting Chief Executive.[7] In case the position becomes vacant, a new Chief Executive would have to be selected.[15] 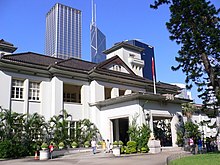 Upon retirement, former chief executives have access to office space at the Office of Former Chief Executives, 28 Kennedy Road.[20] The office provides administrative support to former Chief Executives to perform promotional, protocol-related, or any other activities in relation to their former official role. The activities include receiving visiting dignitaries and delegations, giving local and overseas media interviews, and taking part in speaking engagements.[21] A chauffeur-driven car is provided to discharge promotional and protocol-related functions.

The former Chief Executive holds the title "The Honourable", and ranks third in the Hong Kong order of precedence.

Remuneration for the Chief Executive of Hong Kong is among the highest in the world for a political leader, and only second to that of the Prime Minister of Singapore. The pay level took a cue from the handsome amounts paid to the city's colonial governors – worth $273,000 per annum plus perks in 1992.[23]

In 2005, Chief Executive Tung Chee Hwa received some HK$3 million ($378,500) in pay. From 2009 until the end of 2014, the salary for the job stood at HK$4.22 million. In January 2015, CY Leung reversed a pay freeze imposed in 2012, resulting in its increase to HK$4.61 million ($591,000).[24] In July 2017, Directors of Bureau (DoBs) were approved to have a 12.4% pay rise and the 3.5% pay differential between Secretaries of Departments (SoDs) and DoBs remained,[25] indicating a new annual pay of approximately HK$5 million for the city's leading role because the Chief Executive received a salary of 112% of the Chief Secretary, which means that the new salary of the Chief Executive of Hong Kong is about thirty-nine times more than the current annual salary of the President of the People's Republic of China.[26]

Criticism of the office[edit]

Since the Chief Executive is directly appointed by the Central People's Government[27] after an election by a committee of 1,200 people selected by the Central People's Government, rather than the general population,[28] many people, in particular the pro-democrats, have criticised the office as undemocratic, and have criticised the entire election process as a "small-circle election."[29] Former Chief Executive Tung Chee-hwa has even stated that the election's result is a non-binding one.[30]

Many events, including 2010 events such as the Five Constituencies Referendum have attempted to push for greater democracy and universal suffrage.[31]

In January 2015, when CY Leung reversed a pay freeze imposed on the CE and senior civil servants in 2012, he was accused of granting himself a pay rise by stealth and going against the trend of top politicians taking pay cuts instead of pay increases.[24]

Retrieved from "http://en.turkcewiki.org/w/index.php?title=Chief_Executive_of_Hong_Kong&oldid=980543519"
This website is a mirror of Wikipedia, and is not affiliated with the Wikimedia Foundation.
Categories:
Hidden categories: