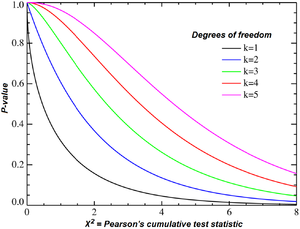 Chi-squared distribution, showing χ2 on the x-axis and p-value (right tail probability) on the y-axis.

In the standard applications of this test, the observations are classified into mutually exclusive classes. If the null hypothesis that there are no differences between the classes in the population is true, the test statistic computed from the observations follows a χ2 frequency distribution. The purpose of the test is to evaluate how likely the observed frequencies would be assuming the null hypothesis is true.

Test statistics that follow a χ2 distribution occur when the observations are independent and normally distributed, which assumptions are often justified under the central limit theorem. There are also χ2 tests for testing the null hypothesis of independence of a pair of random variables based on observations of the pairs.

In the 19th century, statistical analytical methods were mainly applied in biological data analysis and it was customary for researchers to assume that observations followed a normal distribution, such as Sir George Airy and Professor Merriman, whose works were criticized by Karl Pearson in his 1900 paper.[1]

In 1900, Pearson published a paper[1] on the χ2 test which is considered to be one of the foundations of modern statistics.[6] In this paper, Pearson investigated a test of goodness of fit.

Suppose that n observations in a random sample from a population are classified into k mutually exclusive classes with respective observed numbers xi (for i = 1,2,…,k), and a null hypothesis gives the probability pi that an observation falls into the ith class. So we have the expected numbers mi = npi for all i, where

Pearson proposed that, under the circumstance of the null hypothesis being correct, as n → ∞ the limiting distribution of the quantity given below is the χ2 distribution.

Pearson dealt first with the case in which the expected numbers mi are large enough known numbers in all cells assuming every xi may be taken as normally distributed, and reached the result that, in the limit as n becomes large, X2 follows the χ2 distribution with k − 1 degrees of freedom.

will usually be positive and small enough to be omitted. In a conclusion, Pearson argued that if we regarded X′2 as also distributed as χ2 distribution with k − 1 degrees of freedom, the error in this approximation would not affect practical decisions. This conclusion caused some controversy in practical applications and was not settled for 20 years until Fisher's 1922 and 1924 papers.[7][8]

Other examples of chi-squared tests[edit]

For an exact test used in place of the 2 x 2 chi-squared test for independence, see Fisher's exact test.

For an exact test used in place of the 2 x 1 chi-squared test for goodness of fit, see Binomial test.

To reduce the error in approximation, Frank Yates suggested a correction for continuity that adjusts the formula for Pearson's chi-squared test by subtracting 0.5 from the absolute difference between each observed value and its expected value in a 2 × 2 contingency table.[9] This reduces the chi-squared value obtained and thus increases its p-value.

Chi-squared test for variance in a normal population[edit]

If a sample of size n is taken from a population having a normal distribution, then there is a result (see distribution of the sample variance) which allows a test to be made of whether the variance of the population has a pre-determined value. For example, a manufacturing process might have been in stable condition for a long period, allowing a value for the variance to be determined essentially without error. Suppose that a variant of the process is being tested, giving rise to a small sample of n product items whose variation is to be tested. The test statistic T in this instance could be set to be the sum of squares about the sample mean, divided by the nominal value for the variance (i.e. the value to be tested as holding). Then T has a chi-squared distribution with n − 1 degrees of freedom. For example, if the sample size is 21, the acceptance region for T with a significance level of 5% is between 9.59 and 34.17.

Suppose there is a city of 1,000,000 residents with four neighborhoods: A, B, C, and D. A random sample of 650 residents of the city is taken and their occupation is recorded as "white collar", "blue collar", or "no collar". The null hypothesis is that each person's neighborhood of residence is independent of the person's occupational classification. The data are tabulated as:

Then in that "cell" of the table, we have

The sum of these quantities over all of the cells is the test statistic; in this case,

. Under the null hypothesis, this sum has approximately a chi-squared distribution whose number of degrees of freedom are

If the test statistic is improbably large according to that chi-squared distribution, then one rejects the null hypothesis of independence.

In cryptanalysis, the chi-squared test is used to compare the distribution of plaintext and (possibly) decrypted ciphertext. The lowest value of the test means that the decryption was successful with high probability.[10][11] This method can be generalized for solving modern cryptographic problems.[12]

Retrieved from "http://en.turkcewiki.org/w/index.php?title=Chi-squared_test&oldid=998947389"
This website is a mirror of Wikipedia, and is not affiliated with the Wikimedia Foundation.
Categories:
Hidden categories: