Chenango County is a county located in the south-central section U.S. state of New York. As of the 2010 census, the population was 50,477.[1] Its county seat is Norwich.[2] The county's name originates from an Oneida word meaning "large bull-thistle."

This was long the territory of the Oneida people, one of the first Five Nations of the Iroquois Confederacy or Haudenosaunee. They occupied the area until after the Revolutionary War, when they were forced off the land, although they had been allies of the patriot colonists. They were granted a small reservation, which settlers continued to encroach on.

When English colonists organized counties in 1683 in what is now New York, the present Chenango County was part of Albany County. This was an enormous county, including the northern part of New York State as well as all of the present State of Vermont and, in theory, extending westward to the Pacific Ocean. But, territories located to the west of present-day Pennsylvania were under effective French control as part of New France. Albany County was reduced in size on July 3, 1766, by the creation of Cumberland County, and further on March 16, 1770, by the creation of Gloucester County, both containing territory now in Vermont.

On March 12, 1772, what was left of Albany County was split into three parts, one remaining under the name Albany County. One of the other pieces, Tryon County, contained the western portion (and thus, since no western boundary was specified, theoretically still extended west to the Pacific). The eastern boundary of Tryon County was approximately five miles west of the present city of Schenectady, and the county included the western part of the Adirondack Mountains and the area west of the West Branch of the Delaware River. The area then designated as Tryon County has since been organized as 37 counties of New York State. The county was named for William Tryon, the British colonial governor of New York.

In the years prior to 1776, during the increasing tensions most of the Loyalists in Tryon County fled to Fort Niagara on the Western Frontier. In 1784, following the peace treaty that ended the American Revolutionary War, the Americans renamed Tryon County as Montgomery County in honor of the US general, Richard Montgomery. He had captured several places in Canada and died attempting to capture the city of Quebec. The US residents replaced the name of the former British governor. 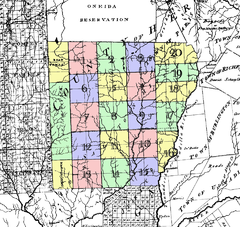 The "Twenty Townships" west of the Unadilla River, conveyed by the Oneida Indians in 1788. Known as "Clinton's Purchase"

In 1788 the Oneida Reservation was considerably reduced by what is known as Clinton's Purchase, when land was sold off west of the Unadilla River to create what are now 20 towns. (See map to the right.) Settlers from eastern New York and New England entered the area and started farming.

In 1789, Montgomery County was reduced in size by the splitting off of Ontario County. The area split off from Montgomery County was much larger than the present Ontario County, as it included the present Allegany, Cattaraugus, Chautauqua, Erie, Genesee, Livingston, Monroe, Niagara, Orleans, Steuben, Wyoming, Yates, and part of Schuyler and Wayne counties. It was the practice to establish a large geographic county and divide it as settlement increased.

In 1791, Herkimer, Otsego and Tioga counties were organized from land separated from Montgomery County.

Chenango County was formed on March 15, 1798 from 1,610 square miles (4,170 km2) of Tioga and Herkimer counties. Its eastern border is formed by the Unadilla River. The land had been purchased the year before from the Oneida, who were forced into a smaller reservation to the north.

On April 4, 1804, 70 square miles (180 km2) of Chenango County was partitioned to expand Oneida County; the communities of Waterville, and Sangerfield were assigned to the new Oneida County.

On March 21, 1806, 650 square miles (1,680 km2) of Chenango County was partitioned to produce Madison County. This established the current borders of Chenango County, which have been maintained to the early 21st century. This area was developed for agriculture in the nineteenth century and is still largely rural.

Chenango County is in the approximate center of the state, west of Albany, north of Binghamton, and southeast of Syracuse. The county is considered to be in the Southern Tier region of New York State.

The Chenango River, a tributary of the Susquehanna River, flows southward through the county.

Chenango County has a Board of Supervisors that consists of 23 Town/City elected officials, serving as representatives at the County level. The term for each Supervisor is based on the term set by each particular Town. A Supervisor holds office for either two or four years.

In 21st-century United States politics, Chenango County is considered a "red" county, where the majority of voters elect national Republican candidates. In 2004, Republican George Bush won by an 11% margin over Democrat John Kerry. For state and congressional offices, voters sometimes elect Democratic candidates. In 2006 both Eliot Spitzer and Hillary Clinton carried it, winning 57% and 54% of the vote for governor and US Senator, respectively. In 2008, John McCain carried Chenango County over Barack Obama in the presidential election by a close margin of 49.59%-48.45% or a difference of 237 votes.[11] In 2010, Democrat Andrew Cuomo for governor, and Democrats Chuck Schumer and Kirsten Gillibrand for the US Senate each carried it.

Morrisville State College has a branch in Norwich.

Norwich, the county seat, is the only city in Chenango County.

In addition to the city of Norwich, the county has the following named settlements:

In New York, a "town" is a political subdivision (synonymous with township). The towns in northern Chenango County originated from the Twenty Townships ceded by the Oneida tribe to the State of New York.

Retrieved from "http://en.turkcewiki.org/w/index.php?title=Chenango_County,_New_York&oldid=950374771"
This website is a mirror of Wikipedia, and is not affiliated with the Wikimedia Foundation.
Categories:
Hidden categories: