Alderney English is the variety of English spoken by some residents of Alderney. It is questionable whether this is a separate dialect: due to Alderney's small size and high rate of immigration and emigration, particularly to/from nearby Guernsey and the UK, a high proportion of the population speaks the English of their place of origin, while many people who have been educated in Guernsey in their youth have acquired a way of speaking that is close to Guernsey English.

Thus Alderney English currently corresponds quite closely to standard English, with a tendency towards mild archaism due to the population demographic in which the over-50s are the largest group.

Its distinguishing feature is a small but significant number of loan words from Guernésiais (the variety of Norman spoken on the neighbouring island of Guernsey), Legal French (which was the language of legislation before the Second World War) and a very much smaller number of words that have come down from Auregnais (now a dead language. It is no longer certain whether there are any rememberers still alive.

An examples of a word used in Alderney that appears neither in standard English nor in Guernsey English is "Impôt" (meaning 'rubbish tip/recycling centre' and not 'tax/imposition' as elsewhere). In addition there is an idiosyncratic pronunciation of certain local surnames, "Dupont" as French pronunciation: ​[dipõ] and "Simon" as [symõ], rather than the standard Parisian pronunciation. Any remainder of the historic influence of Auregnais on Alderney English is very hard to discern, since Guernésiais and Auregnais differed only slightly.

Guernsey English is the dialect of English spoken in Guernsey, distinguished by having considerable influence from Guernésiais, the variety of Norman indigenous to Guernsey.

The dialect contains terms such as buncho (from Dgèrnésiais: bond d'tchu) for the English "somersault"; "it picks" instead of "it stings", from the Guernsey equivalent of the French "il pique"; "chirry" for "goodbye"; and "Budlo Night" instead of Bonfire Night on 5 November.

Often Guernsey people will add the word "Eh" to the end of a sentence, inferring a general agreement that something is held to be true or correct. It can also be used in the context of asking a question or seeking reassurance that what was said is correct if it is believed to be a contentious issue.

Jersey English is a dialect of English spoken in Jersey, Channel Islands, the accent of which has been likened to that of South African English.[1] It is influenced by the use of Jèrriais and Jersey Legal French.

Jersey English has imported a number of Jersey Legal French titles and terminology. Many of these, in turn, derive from Jèrriais. The following are examples likely to be encountered in daily life and in news reports in Jersey: rapporteur, en défaut (in default, i.e. late for a meeting),[2] en désastre, au greffe, greffier (clerk-of-Court or the States), bâtonnier (lawyer in charge of Bar, particularly for legal aid), mandataire, autorisé (returning officer at elections, or other functions), projet (parliamentary bill), vraic, côtil, temps passé (time past), vin d'honneur (municipal or official reception), centenier, vingtenier, chef de police (senior centenier), branchage (pronounced in English as the Jèrriais cognate even though spelt in the French manner - trimming hedges and verges on property border; also used jocularly for a haircut), seigneur (feudal lord of the manor). 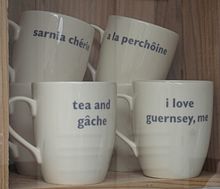 "I love Guernsey, me" - this slogan on a cup demonstrates the typical use of the emphatic pronoun

Examples of structures used by people in the Channel Islands are:

Retrieved from "http://en.turkcewiki.org/w/index.php?title=Channel_Island_English&oldid=970798069"
This website is a mirror of Wikipedia, and is not affiliated with the Wikimedia Foundation.
Categories:
Hidden categories: