Jump to navigation Jump to search
Probability distribution
"Lorentz distribution" redirects here. It is not to be confused with Lorenz curve or Lorenz equation.

with a uniformly distributed angle. It is also the distribution of the ratio of two independent normally distributed random variables with mean zero.

In mathematics, it is closely related to the Poisson kernel, which is the fundamental solution for the Laplace equation in the upper half-plane.

It is one of the few distributions that is stable and has a probability density function that can be expressed analytically, the others being the normal distribution and the Lévy distribution.

Functions with the form of the density function of the Cauchy distribution were studied by mathematicians in the 17th century, but in a different context and under the title of the witch of Agnesi. Despite its name, the first explicit analysis of the properties of the Cauchy distribution was published by the French mathematician Poisson in 1824, with Cauchy only becoming associated with it during an academic controversy in 1853.[2] As such, the name of the distribution is a case of Stigler's Law of Eponymy. Poisson noted that if the mean of observations following such a distribution were taken, the mean error did not converge to any finite number. As such, Laplace's use of the Central Limit Theorem with such a distribution was inappropriate, as it assumed a finite mean and variance. Despite this, Poisson did not regard the issue as important, in contrast to Bienaymé, who was to engage Cauchy in a long dispute over the matter.

The Cauchy distribution has the probability density function (PDF)[1][3]

is the scale parameter which specifies the half-width at half-maximum (HWHM), alternatively

is full width at half maximum (FWHM).

is also equal to half the interquartile range and is sometimes called the probable error. Augustin-Louis Cauchy exploited such a density function in 1827 with an infinitesimal scale parameter, defining what would now be called a Dirac delta function.

The maximum value or amplitude of the Cauchy PDF is

The special case when

In physics, a three-parameter Lorentzian function is often used:

is the height of the peak. The three-parameter Lorentzian function indicated is not, in general, a probability density function, since it does not integrate to 1, except in the special case where

and the quantile function (inverse cdf) of the Cauchy distribution is

It follows that the first and third quartiles are

, and hence the interquartile range is

For the standard distribution, the cumulative distribution function simplifies to arctangent function

The entropy of the Cauchy distribution is given by:

The differential entropy of a distribution can be defined in terms of its quantile density,[6] specifically:

or, alternatively, for a random variate

In its standard form, it is the maximum entropy probability distribution for a random variate

The Cauchy distribution is an example of a distribution which has no mean, variance or higher moments defined. Its mode and median are well defined and are both equal to

are two independent normally distributed random variables with expected value 0 and variance 1, then the ratio

has the standard Cauchy distribution.

(defining a categorical distribution) it holds that

are independent and identically distributed random variables, each with a standard Cauchy distribution, then the sample mean

has the same standard Cauchy distribution. To see that this is true, compute the characteristic function of the sample mean:

The standard Cauchy distribution coincides with the Student's t-distribution with one degree of freedom.

. Observe that the characteristic function is not differentiable at the origin: this corresponds to the fact that the Cauchy distribution does not have well-defined moments higher than the zeroth moment.

If a probability distribution has a density function

, then the mean, if it exists, is given by

for an arbitrary real number

which is zero. On the other hand, the related integral

is not zero, as can be seen easily by computing the integral. This again shows that the mean (1) cannot exist.

Various results in probability theory about expected values, such as the strong law of large numbers, fail to hold for the Cauchy distribution.[11]

The Cauchy distribution does not have finite moments of any order. Some of the higher raw moments do exist and have a value of infinity, for example the raw second moment:

since the two halves of the integral both diverge and have opposite signs. The first raw moment is the mean, which, being odd, does not exist. (See also the discussion above about this.) This in turn means that all of the central moments and standardized moments are undefined, since they are all based on the mean. The variance—which is the second central moment—is likewise non-existent (despite the fact that the raw second moment exists with the value infinity).

Although the sample values

will be concentrated about the central value

than any single observation from the sample. Similarly, calculating the sample variance will result in values that grow larger as more observations are taken.

and the scaling parameter

are needed. One simple method is to take the median value of the sample as an estimator of

and half the sample interquartile range as an estimator of

. Other, more precise and robust methods have been developed [14][15] For example, the truncated mean of the middle 24% of the sample order statistics produces an estimate for

that is more efficient than using either the sample median or the full sample mean.[16][17] However, because of the fat tails of the Cauchy distribution, the efficiency of the estimator decreases if more than 24% of the sample is used.[16][17]

Maximum likelihood can also be used to estimate the parameters

. However, this tends to be complicated by the fact that this requires finding the roots of a high degree polynomial, and there can be multiple roots that represent local maxima.[18] Also, while the maximum likelihood estimator is asymptotically efficient, it is relatively inefficient for small samples.[19][20] The log-likelihood function for the Cauchy distribution for sample size

produces the following system of equations:

is a monotone function in

and that the solution

requires solving a polynomial of degree

requires solving a polynomial of degree

). Therefore, whether solving for one parameter or for both parameters simultaneously, a numerical solution on a computer is typically required. The benefit of maximum likelihood estimation is asymptotic efficiency; estimating

by maximum likelihood.[17][21] The truncated sample mean using the middle 24% order statistics is about 88% as asymptotically efficient an estimator of

has a Cauchy distribution. That is, for any constant vector

are real functions with

a homogeneous function of degree one and

a positive homogeneous function of degree one.[22] More formally:[22]

An example of a bivariate Cauchy distribution can be given by:[23]

Note that in this example, even though there is no analogue to a covariance matrix,

are not statistically independent.[23]

We also can write this formula for complex variable. Then the probability density function of complex cauchy is :

Analogous to the univariate density, the multidimensional Cauchy density also relates to the multivariate Student distribution. They are equivalent when the degrees of freedom parameter is equal to one. The density of a

dimension Student distribution with one degree of freedom becomes:

Properties and details for this density can be obtained by taking it as a particular case of the multivariate Student density.

is the circular Cauchy distribution.

can be expressed explicitly.[26] In the case

of the Cauchy distribution, one has

This last representation is a consequence of the formula 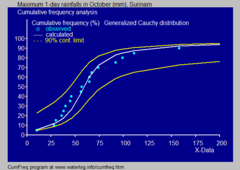 Retrieved from "http://en.turkcewiki.org/w/index.php?title=Cauchy_distribution&oldid=946770148"
This website is a mirror of Wikipedia, and is not affiliated with the Wikimedia Foundation.
Categories:
Hidden categories: