Carlton is known nationwide for its Little Italy precinct centered on Lygon Street, for its preponderance of 19th century Victorian architecture and its garden squares including the Carlton Gardens, the latter being the location of the Royal Exhibition Building, one of Australia's few man-made sites with World Heritage status.

Due to its proximity to The University of Melbourne, the CBD campus of RMIT University and the Fitzroy campus of Australian Catholic University, Carlton is also home to one of the highest concentrations of university students in Australia.

Carlton was founded in 1851 at the beginning of the Victorian Gold Rush, with the Carlton Post Office opening on 19 October 1865.[2] In the 1930s, many of the homes on the streets in Carlton were known to be slum pockets and owned by poor residents. In the 1960s, residents were forced to sell their homes to the Housing Commission of Victoria, since then some areas of Carlton have been under residential and commercial redevelopment, while other areas survived and have remained remarkably intact.[3][4]

Squizzy Taylor an Australian gangster was wounded in a gunfight with a rival gangster, John "Snowy" Cutmore, in 1927 at a house in Barkly Street, Carlton and later died at St Vincent's Hospital.[5]

In the 1970s, Carlton was the site of three green bans, one on abandoned land where local residents wanted a park and a developer wanted a warehouse, now the Hardy-Gallagher Reserve (named after Labor councillor Fred Hardy and Norm Gallagher).[6] Another which converted a vacant lot on Cardigan street to a park and another that saved local terrace housing.[7]

Double storey terraces on Drummond street, typical of much of Carlton's residential districts 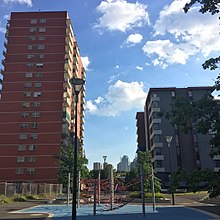 Carlton is characterized by medium- to high-density housing, with a mix of apartments and student accommodation, attached and semidetached terraces mostly from the Victorian era and mix-use buildings

Apartments (83.2%) are the most common form of housing.[1] Carlton's apartments are low incomes, including crisis and student accommodation, with Housing Commission of Victoria towers and modern student apartment buildings. The two main housing commission estates are between Lygon and Rathdowne Streets, and between Nicholson and Canning Streets. These are configured as a mixture of 4 and 5-storey walk-up flats and 22-storey high-rise towers which are in the process of being redeveloped as mixed-tenure housing. 76.8% of Carlton's housing is rented,[1] the vast majority of which is concentrated in these apartment towers. The development of new apartment buildings to accommodate international student market since the late 1990s has transformed the once low-rise skyline of Swanston Street, so that its predominant height is about 10–11 storeys. Some strata-titled apartments are clustered fronting suburb's parks and gardens.

Semi-detached housing makes up most of the remaining occupied private dwellings (14.7%).[1] Much of this type of housing is the suburb's remaining stock of terrace houses which proliferated in the Victorian era. Today these homes are highly sought after, attract high prices and have been the primary of gentrification. Many are contained within heritage overlays and have individual heritage listings. Some of the best examples of this style can be found on Drummond Street, a long wide boulevard flanked by grand homes, including Rosaville (no46 built 1883), Drummond Terrace (no 93-105 built 1890–91), Lothian Terrace (no175-179 built 1865–69), Terraces at 313&315 (1889). Though many terraces in Carlton no longer function as residences and have either been converted for mixed-use or facaded as part of larger developments.

Carlton's public spaces were planned in the Victorian era and notably are all garden squares. These are rectilinear green spaces surrounded by buildings, based on a model fashionable in Europe. There are five main garden squares within the suburb – Carlton Gardens, University Square, Lincoln Square, Argyle Place and MacArthur Place.

The largest of these squares is the 26 hectare Carlton Gardens, planned for the World Exhibition.

Lincoln Square on Swanston Street has a Bali Memorial, commemorating the victims of the 2002 Bali bombings officially opened on 12 October 2005, the third anniversary of the explosion that killed 202 innocent people, including 88 Australians.

The northern part of Argyle Square, adjacent to Lygon Street, has been redeveloped into an Italian style piazza, known as Piazza Italia, in a joint project between the City of Melbourne and its twin city, Milan. A giant sundial is the main feature of the piazza.

Lygon Street is home to a large concentration of Italian restaurants, and is the birthplace of Melbourne's "café culture".[10]

The famous La Mama Theatre is located in Carlton. It is noted for its energy, which is typical of the early Australian theatre scene in the 1970s. Besides that, Cinema Nova on Lygon Street shows many Australian and international art-house films, while Readings Bookstore has been a hub for literary and musical connoisseurs since the 1970s. The 1977 cult-classic novel Monkey Grip by Helen Garner is set in Carlton and its surroundings. 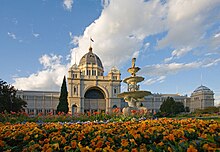 Carlton is home to some of Melbourne's most historically significant buildings such as Melbourne Trades Hall and the World Heritage Site of the Carlton Gardens, the Royal Exhibition Building and the ruins of the old Carlton Brewery, a collection of buildings constructed between 1864 and 1927, all listed on the Victorian Heritage Register. The Carlton Gardens are also home to the Melbourne Museum.

Carlton has many 19th century public buildings. The Carlton Club, which was built in 1889 by Inskip & Robertson, is notable for its decorative Australian native kangaroo gargoyles and polychrome Florentine arches. The Carlton Post Office and Police Station are both fine Renaissance Revival styled buildings. The Carlton Court House on Drummond Street was designed in the Gothic style by G.B.H Austin and constructed between 1888 and 1889. The Lygon Buildings on Lygon Street were built in 1888 in the Mannerist style. Carlton Gardens Primary School, on Rathdowne Street, opened in 1884. The Police Station (no330 built 1878), Court House (no345-355 built 1887–88) and Medley Hall (no48 built 1892–93) are other notable heritage buildings.

Carlton is the home of the Australian rules football club, the Carlton Football Club (known as 'the Blues'), who are based at their former home ground, the Princes Park Football Ground, in nearby North Carlton. The club plays home games at the Docklands Stadium and the Melbourne Cricket Ground.

Lygon Street, Grattan Street and Queensberry Street were part of the route of the marathon in the 2006 Commonwealth Games, which was hosted in Melbourne. Lygon and Cardigan Streets are part of the seventh course of the annual cycling tour, Jayco Herald Sun Tour.

Lygon Street, which runs through the heart of Carlton, is a centre of Italian culture and cuisine. It is popular among Melburnians and foreigners alike for its numerous restaurants, especially Italian restaurants. Lygon Street has six specialist gelaterias, and several continental cake cafes.

Although Lygon Street is most renowned for its cafes and restaurants, it is also home to some notable retail stores including Readings bookstore.

The area is noted for its diverse population that has been the home in earlier days of Jewish and Italian immigrants. A large number of low-income residents live in the substantial public housing estates that were built during the 1960s.

A traditional working-class suburb, it traditionally saw a high vote for the ALP. However, like many other inner-city suburbs undergoing a process of gentrification, The Greens have been gaining an increasing share of the vote.

Due to Carlton's close proximity to the Parkville campus of the University of Melbourne, many university-owned buildings can be found around Carlton, as a result of the university's expansion through the years. This includes the University Square redevelopment, where the state-of-the-art Law and ICT buildings and a new underground carpark are located. However, the University's continued expansion into Carlton is opposed by some residents. Two of the University's residential colleges are located in Carlton; Medley Hall is located on Drummond Street, while Graduate House is on Leicester Street. Graduate House is a residential college for graduate students only and does not admit any undergraduate students.

Primary education is provided by two schools; Carlton Gardens Primary School and Carlton Primary School. CGPS was founded in 1884 and is one of Melbourne's oldest schools and the closest to the Melbourne CBD.

The Melbourne University Regiment (MUR) is based in Grattan Street, Carlton. MUR serves to train potential officers in the Australian Army Reserve. MUR was founded in 1884 as D company, 4th Battalion of the Victorian Rifles, and changed to its current name and role in 1948. Famous alumni include Sir John Monash, Sir Robert Menzies, Sir Ninian Stephen, Barry Humphries, and Andrew Peacock.[11]

Carlton is also very well serviced by the health sector. The Royal Women's Hospital and the new Royal Dental Hospital provide high quality health care. It is also a centre of biomedical research. The Cancer Research Institute and the Australian College of Optometry all have their premises in Carlton. Carlton is the home of NETS (Victoria) which provides emergency transport of sick newborns between hospitals throughout Victoria and from Tasmania. It was also the home of Cancer Council Victoria for many years before moving to St Kilda Rd.

There are a number of churches in Carlton, which serve the spiritual needs of Carlton residents. St Jude's Church, on Lygon Street, is one of the most active and well attended Anglican churches in the Greater Melbourne area. Other churches in the area include the bluestone Church of All Nations (a Uniting Church) in Palmerston Street dating from 1860, a Romanian Orthodox Church on Queensberry Street, a Salvation Army Church, the Sacred Heart Catholic Church, Chinese Church of Christ and the Christian Chapel of the Church of Christ, built in 1865. The Catholic seminary is located on the site of St George's Catholic Church, Carlton's oldest surviving building, dating from 1855. 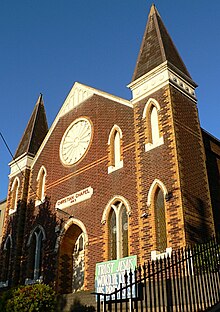 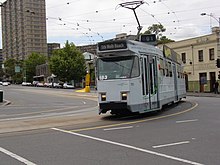 Z3 tram near the corner of Elgin and Lygon Streets

Carlton is served by many of Melbourne's tram routes, running along Swanston Street and terminating at Melbourne University. Routes 1 and 6 continue through to Carlton North and beyond via Lygon Street.

Buses serve Carlton via Lygon, Elgin, and Rathdowne Streets. There are currently no trains to Carlton, with the closest station being Melbourne Central Station. There were talks and proposals of extending the City Loop to service Carlton, but no concrete plans have been proposed.

Rod Eddington's East West Link Needs Assessment does mention however, that there will be subway(s) in Carlton, as a part of the proposed 17 km metro tunnel.[12]

Retrieved from "http://en.turkcewiki.org/w/index.php?title=Carlton,_Victoria&oldid=967601104"
This website is a mirror of Wikipedia, and is not affiliated with the Wikimedia Foundation.
Categories:
Hidden categories: