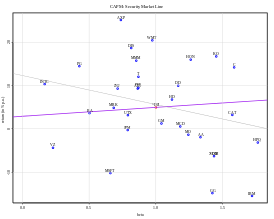 An estimation of the CAPM and the security market line (purple) for the Dow Jones Industrial Average over 3 years for monthly data.

In finance, the capital asset pricing model (CAPM) is a model used to determine a theoretically appropriate required rate of return of an asset, to make decisions about adding assets to a well-diversified portfolio.

The model takes into account the asset's sensitivity to non-diversifiable risk (also known as systematic risk or market risk), often represented by the quantity beta (β) in the financial industry, as well as the expected return of the market and the expected return of a theoretical risk-free asset. CAPM assumes a particular form of utility functions (in which only first and second moments matter, that is risk is measured by variance, for example a quadratic utility) or alternatively asset returns whose probability distributions are completely described by the first two moments (for example, the normal distribution) and zero transaction costs (necessary for diversification to get rid of all idiosyncratic risk). Under these conditions, CAPM shows that the cost of equity capital is determined only by beta.[1][2] Despite it failing numerous empirical tests,[3] and the existence of more modern approaches to asset pricing and portfolio selection (such as arbitrage pricing theory and Merton's portfolio problem), the CAPM still remains popular due to its simplicity and utility in a variety of situations.

The CAPM was introduced by Jack Treynor (1961, 1962),[4] William F. Sharpe (1964), John Lintner (1965a,b) and Jan Mossin (1966) independently, building on the earlier work of Harry Markowitz on diversification and modern portfolio theory. Sharpe, Markowitz and Merton Miller jointly received the 1990 Nobel Memorial Prize in Economics for this contribution to the field of financial economics. Fischer Black (1972) developed another version of CAPM, called Black CAPM or zero-beta CAPM, that does not assume the existence of a riskless asset. This version was more robust against empirical testing and was influential in the widespread adoption of the CAPM.

Restated, in terms of risk premium, we find that:

which states that the individual risk premium equals the market premium times β.

Note 1: the expected market rate of return is usually estimated by measuring the arithmetic average of the historical returns on a market portfolio (e.g. S&P 500).

There has also been research into a mean-reverting beta often referred to as the adjusted beta, as well as the consumption beta. However, in empirical tests the traditional CAPM model has been found to do as well as or outperform the modified beta models.

The relationship between β and required return is plotted on the securities market line (SML), which shows expected return as a function of β. The intercept is the nominal risk-free rate available for the market, while the slope is the market premium, E(Rm)− Rf. The securities market line can be regarded as representing a single-factor model of the asset price, where Beta is exposure to changes in value of the Market. The equation of the SML is thus:

It is a useful tool in determining if an asset being considered for a portfolio offers a reasonable expected return for risk. Individual securities are plotted on the SML graph. If the security's expected return versus risk is plotted above the SML, it is undervalued since the investor can expect a greater return for the inherent risk. And a security plotted below the SML is overvalued since the investor would be accepting less return for the amount of risk assumed.

Once the expected/required rate of return

is calculated using CAPM, we can compare this required rate of return to the asset's estimated rate of return over a specific investment horizon to determine whether it would be an appropriate investment. To make this comparison, you need an independent estimate of the return outlook for the security based on either fundamental or technical analysis techniques, including P/E, M/B etc.

, a higher expected return than what CAPM suggests indicates that

is too low (the asset is currently undervalued), assuming that at time

the asset returns to the CAPM suggested price.[6]

using CAPM, sometimes called the certainty equivalent pricing formula, is a linear relationship given by

is the payoff of the asset or portfolio.[5]

The CAPM returns the asset-appropriate required return or discount rate—i.e. the rate at which future cash flows produced by the asset should be discounted given that asset's relative riskiness.

Betas exceeding one signify more than average "riskiness"; betas below one indicate lower than average. Thus, a more risky stock will have a higher beta and will be discounted at a higher rate; less sensitive stocks will have lower betas and be discounted at a lower rate. Given the accepted concave utility function, the CAPM is consistent with intuition—investors (should) require a higher return for holding a more risky asset.

Since beta reflects asset-specific sensitivity to non-diversifiable, i.e. market risk, the market as a whole, by definition, has a beta of one. Stock market indices are frequently used as local proxies for the market—and in that case (by definition) have a beta of one. An investor in a large, diversified portfolio (such as a mutual fund), therefore, expects performance in line with the market.

A rational investor should not take on any diversifiable risk, as only non-diversifiable risks are rewarded within the scope of this model. Therefore, the required return on an asset, that is, the return that compensates for risk taken, must be linked to its riskiness in a portfolio context—i.e. its contribution to overall portfolio riskiness—as opposed to its "stand alone risk". In the CAPM context, portfolio risk is represented by higher variance i.e. less predictability. In other words, the beta of the portfolio is the defining factor in rewarding the systematic exposure taken by an investor.

Because the unsystematic risk is diversifiable, the total risk of a portfolio can be viewed as beta.

In their 2004 review, economists Eugene Fama and Kenneth French argue that "the failure of the CAPM in empirical tests implies that most applications of the model are invalid".[3]

Retrieved from "http://en.turkcewiki.org/w/index.php?title=Capital_asset_pricing_model&oldid=930429656"
This website is a mirror of Wikipedia, and is not affiliated with the Wikimedia Foundation.
Categories:
Hidden categories: