Campana is a city in the province of Buenos Aires, Argentina. It is the seat of the Campana Partido. It is located about 75 km (47 mi) from the Autonomous City of Buenos Aires, on the right-hand margin of the Paraná River. Its population is 94,333 inhabitants as per the 2010 census [INDEC].

Campana and Zárate make up an important industrial region. The city is linked to Zárate and the Zárate-Brazo Largo Bridge (and from there to Mesopotamia) by Provincial Route 6. The Pan-American Highway (Route 9) links Campana to Buenos Aires, Rosario, Córdoba and the north of Argentina.

The village of Campana was officially created in 1875. On 6 July 1885 the Campana Partido was created as an offshoot of the Exaltación de la Cruz Partido.

Campana has been since late 19th century and to a lesser degree today an important shipyard and port for passengers traveling to the remote Ibicuy Islands of the Paraná Delta.

Japanese automobile manufacturer Honda opened a factory in 2011, where it has built the Honda City and Honda HR-V. 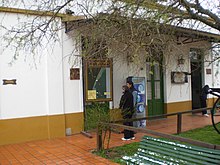 Welcome Centre at the Otamendi Natural Reserve, outside Campana.

Most of the city's population consists almost entirely by descendants of Italian and Spanish (mostly Galicians) immigrants, although there are other minorities such as Germans, British, French and Roms. In recent years there has been a slight increase in population from East Asia (China and South Korea) and Latin American countries like Bolivia, Paraguay and Peru.

Retrieved from "http://en.turkcewiki.org/w/index.php?title=Campana,_Buenos_Aires&oldid=933147312"
This website is a mirror of Wikipedia, and is not affiliated with the Wikimedia Foundation.
Categories:
Hidden categories: