Jump to navigation Jump to search
Dialect of English 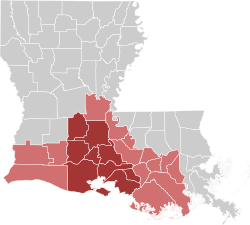 Acadiana, the traditional Cajun homeland and the stronghold of both the Louisiana French and Cajun English dialects.

Cajun English, or Cajun Vernacular English, is the dialect of English spoken by Cajuns living in southern Louisiana. Cajun English is significantly influenced by Louisiana French, the historical language of the Cajun people, a subset of Louisiana Creoles—although many today prefer not to identify as such—who descend largely from the Acadians expelled from Canada during Le Grand Dérangement (among many others). It is derived from Louisiana French and is on the list of dialects of the English language for North America. Louisiana French differs, sometimes markedly, from Metropolitan French in terms of pronunciation and vocabulary, partially due to unique features in the original settlers' dialects and partially because of the long isolation of Louisiana Creoles (including Cajuns) from the greater francophone world.

English is now spoken by the vast majority of the Cajun population, but French influence remains strong in terms of inflection and vocabulary. Their accent is considerably distinct from the General American.[1] Cajun French is considered by many to be an endangered language, mostly used by elderly generations.[2] However it is now frequently spoken by even the youngest Cajuns, and is seeing something of a cultural renaissance. In recent years, due to influence from tourism and a resurgence of pride in their cultural identity, a new era of linguistic innovation for Cajun English has begun. Dramatic differences are developing along both gender and generational lines as for how Cajun English is used and what it means to be Cajun.[3]

Cajun English is spoken throughout Louisiana and up through the gulf of Texas. Its speakers are often descendants of Acadians from Nova Scotia, Canada, who in 1765 migrated to French-owned Louisiana when the British took control of Nova Scotia. In 1803, however, the United States purchased Louisiana and, in 1812, declared English as the official language of the state. Despite this change, many Creoles at the time, who lived in small towns and were poorly educated, continued to use French exclusively.[2] This isolated them, subjecting them to ridicule and treatment as second-class citizens. In the 1930s English was the only language taught in schools, but the Creole communities still resisted the change, using French at home and in their communities. The combination of being native French speakers and the incomplete English Cajun children were learning during their inconsistent public education led to the advent of Cajun English, a fusion of both languages.[2]

After World War II, however, Cajun English saw a severe decline in use, as young people entered the military and were consequently using English more and more in their daily lives. Meanwhile, Cajun children were beginning to receive better and more consistent education, which allowed them to become wealthier than the generation before them.[2] At this time, there was still a lot of stigma associated with Cajun English and in order to achieve and maintain the new social status many young Cajuns now enjoyed, they abandoned French and Cajun English entirely in favor of more American cultural lifestyles and dialects. This shift caused Cajun English to become an endangered dialect. Many decades later, the new Cajun generation perceived a loss of cultural identity and their efforts to recover it began the Cajun Renaissance.[2] The corresponding upsurge of Cajun food, music, and festivities have been well received by tourists and are now supported by the local government. Although Cajun English has made a comeback, the bilingualism that originally created it, a knowledge of both French and English, has not. Cajun English speakers today typically do not speak French, and experts believe that it is unlikely that this part of the culture will be recovered.[2] This shift away from bilingualism has changed the source of many of the phonological differences between Cajun English and Standard American English from interference caused by being a native French speaker to markers of Cajun identity.[3]

Cajun English is distinguished by some of the following phonological features:

Non-rhoticity,unlike most of the American south, cajun accents tend to drop r after vowel sounds.

These are a few other examples.

Some variations from Standard English[edit]

There are several phrases used by Cajuns that are completely unknown to non-Cajun speakers. When outside of Acadiana, Cajuns tend to be made fun of for using these phrases. Young Cajuns are often jokingly discouraged from marrying non-Cajuns for this simple fact. Some common phrases are listed below:

"Come see" is the equivalent of saying "come here" regardless of whether or not there is something to "see." The French "viens voir," or "venez voir," meaning "come" or "please come," is often used in Cajun French to ask people to come.[5] This phrasing may have its roots in "viens voir ici" (IPA: [isi]), the French word for "here."[citation needed]

Instead of "When did you go?"

To "save the dishes" means to "put away the dishes into cupboards where they belong after being washed". While dishes are the most common subject, it is not uncommon to save other things. For example: Save up the clothes, saving the tools, save your toys.

"Getting/Running down at the store" involves stepping out of a car to enter the store. Most commonly, the driver will ask the passenger, "Do you want to run/get down with me?" One can get down at any place, not just the store. The phrase "get down" may come from the act of "getting down from a horse" as many areas of Acadiana were only accessible by horse (or boat) well into the 20th century. It also may originate from the French language descendre meaning to get down, much as some English-Spanish bilingual speakers say "get down," from the Spanish bajar.

"Makin' groceries" refers to the act of buying groceries, rather than that of manufacturing them. The confusion originates from the direct translation of the American French phrase "faire l'épicerie" which is understood by speakers to mean "to do the grocery shopping." "Faire" as used in the French language can mean either "to do" or "to make." This is a term frequently used in New Orleans, but it's not used very much elsewhere in the Acadiana area.[6]

"Making water" is using the bathroom. One would say, "I need to go make water." It's mostly used in New Orleans.

Several characters of Gabriel Knight: Sins of the Fathers, particularly the narrator, have Cajun accents. Some characters even use Cajun French phrases.

Retrieved from "http://en.turkcewiki.org/w/index.php?title=Cajun_English&oldid=935706992"
This website is a mirror of Wikipedia, and is not affiliated with the Wikimedia Foundation.
Categories:
Hidden categories: