Jump to navigation Jump to search
Member of a bureaucracy 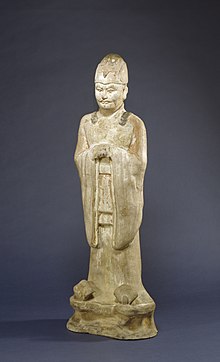 Statue of a Tang dynasty official, 7th–8th century.
For the Wikipedia user right, see Wikipedia:Bureaucrats.
For other uses, see The Bureaucrats.

A bureaucrat is a member of a bureaucracy and can compose the administration of any organization of any size, although the term usually connotes someone within an institution of government.

The term bureaucrat derives from "bureaucracy", which in turn derives from the French "bureaucratie" first known from the 18th century.[1] Bureaucratic work had already been performed for many centuries. In countries such as Pakistan, India and Bangladesh, bureaucrats are known to be the officials that run the government sector at administrative levels as well as ministerial levels and also they are known as executives that run the corporate sector at managerial and directorial level.

Bureaucrats play various roles in modern society, by virtue of holding administrative, functional, and managerial positions in government.[2][3][4] They carry out the day-to-day implementation of enacted policies for central government agencies, such as postal services, education and healthcare administration, and various regulatory bodies.[5]

Bureaucrats can be split into different categories based on the system, nationality, and time they come from.

As an academic, Woodrow Wilson, later a US President, professed in his 1887 article The Study of Administration:[10]

But to fear the creation of a domineering, illiberal officialism as a result of the studies I am here proposing is to miss altogether the principle upon which I wish most to insist. That principle is, that administration in the United States must be at all points sensitive to public opinion. A body of thoroughly trained officials serving during good behavior we must have in any case: that is a plain business necessity. But the apprehension that such a body will be anything un-American clears away the moment it is asked. What is to constitute good behavior? For that question obviously carries its own answer on its face. Steady, hearty allegiance to the policy of the government they serve will constitute good behavior. That policy will have no taint of officialism about it. It will not be the creation of permanent officials, but of statesmen whose responsibility to public opinion will be direct and inevitable. Bureaucracy can exist only where the whole service of the state is removed from the common political life of the people, its chiefs as well as its rank and file. Its motives, its objects, its policy, its standards, must be bureaucratic. It would be difficult to point out any examples of impudent exclusiveness and arbitrariness on the part of officials doing service under a chief of department who really served the people, as all our chiefs of departments must be made to do. It would be easy, on the other hand, to adduce other instances like that of the influence of Stein in Prussia, where the leadership of one statesman imbued with true public spirit transformed arrogant and perfunctory bureaux into public-spirited instruments of just government.

Retrieved from "http://en.turkcewiki.org/w/index.php?title=Bureaucrat&oldid=1093991843"
This website is a mirror of Wikipedia, and is not affiliated with the Wikimedia Foundation.
Categories:
Hidden categories: