In options trading, a bull spread is a bullish, vertical spread options strategy that is designed to profit from a moderate rise in the price of the underlying security. 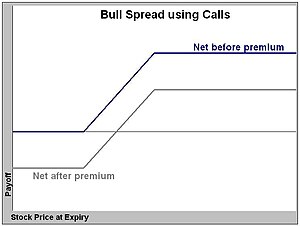 Payoffs from a bull call spread 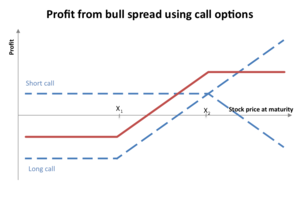 A bull spread can be constructed using two call options.

This strategy is also called a call debit spread because it causes the trader to incur a debit (spend money) up front to enter the position.

The trader will realize maximum profit on the trade if the underlying closes above the short strike on expiration.

If the bull put spread is done so that both the sold and bought put expire on the same day, it is a vertical credit put spread.

This strategy is also called a put credit spread because the trader will receive a credit (be paid the premium) for entering the position.

The trader will realize maximum profit if the underlying closes above the short strike on expiration.

The bull put spread is explained as selling ITM put and buying OTM put, while in the example both puts are ITM.

Retrieved from "http://en.turkcewiki.org/w/index.php?title=Bull_spread&oldid=977082156"
This website is a mirror of Wikipedia, and is not affiliated with the Wikimedia Foundation.
Categories: