Jump to navigation Jump to search
For other uses, see Bull (disambiguation).
Male individual of cattle

A bull is an intact (i.e., not castrated) adult male of the species Bos taurus (cattle). More muscular and aggressive than the female of the species, the cow, the bull has long been an important symbol in many cultures, and plays a significant role in both beef ranching and dairy farming, and in a variety of other cultural activities.

The female counterpart to a bull is a cow, while a male of the species that has been castrated is a steer, ox[1] or bullock, although in North America, this last term refers to a young bull[citation needed], and in Australia to a draught animal. Use of these terms varies considerably with area and dialect. Colloquially, people unfamiliar with cattle may refer to both castrated and intact animals as "bulls".

A wild, young, unmarked bull is known as a micky in Australia.[2] Improper or late castration on a bull results in it becoming a coarse steer, also known as a stag in Australia, Canada, and New Zealand.[3] In some countries, an incompletely castrated male is known also as a rig or ridgling.

The word "bull" also denotes the males of other bovines, including bison and water buffalo, as well as many other species of large animals including elephants, rhinos, seals and walruses, hippos, camels, giraffes, elk, moose, whales, and antelopes. 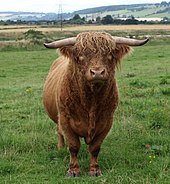 Bulls are much more muscular than cows, with thicker bones, larger feet, a very muscular neck, and a large, bony head with protective ridges over the eyes. These features assist bulls in fighting for domination over a herd, giving the winner superior access to cows for reproduction.[4] The hair is generally shorter on the body, but the neck and head often have a "mane" of curlier, wooly hair. Bulls are usually about the same height as cows or a little taller, but because of the additional muscle and bone mass, they often weigh far more. Most of the time, a bull has a hump on his shoulders.[5] In horned cattle, the horns of bulls tend to be thicker and somewhat shorter than those of cows,[6] and in many breeds, they curve outwards in a flat arc rather than upwards in a lyre shape. It is not true, as is commonly believed, bulls have horns and cows do not: the presence of horns depends on the breed, or in horned breeds on whether the horns have been disbudded (although in many breeds of sheep, it is true that only the males have horns). Cattle that naturally do not have horns are referred to as polled, or muleys.[7]

Castrated male cattle are physically similar to females in build and horn shape, although if allowed to reach maturity, they may be considerably taller than either bulls or cows, with heavily muscled shoulders (but not necks).[8] 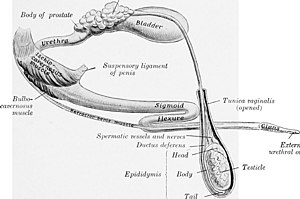 The reproductive system of a bull

Bulls become fertile around seven months of age. Their fertility is closely related to the size of their testicles, and one simple test of fertility is to measure the circumference of the scrotum; a young bull is likely to be fertile once this reaches 28 centimetres (11 in); that of a fully adult bull may be over 40 centimetres (16 in).[9][10]

Bulls have a fibroelastic penis. Given the small amount of erectile tissue, little enlargement occurs after erection. The penis is quite rigid when not erect, and becomes even more rigid during erection. Protrusion is not affected much by erection, but more by relaxation of the retractor penis muscle and straightening of the sigmoid flexure.[11][12][13] Bulls are occasionally affected by a condition known as "corkscrew penis".[14][15] The penis of a mature bull is about 3–4 cm in diameter,[16][17][18][19] and 80–100 cm in length.[20] The bull's glans penis has a rounded and elongated shape.[20]

A common misconception widely repeated in depictions of bull behavior is that the color red angers bulls, inciting them to charge. In fact, like most mammals, cattle are red-green color blind.[21] In bullfighting, the movement of the matador's cape, and not the color, provokes a reaction in the bull.

Other than the few bulls needed for breeding, the vast majority of male cattle are castrated and slaughtered for meat before the age of three years, except where they are needed (castrated) as work oxen for haulage. Most of these beef animals are castrated as calves to reduce aggressive behavior and prevent unwanted mating,[22] although some are reared as uncastrated bull beef. A bull is typically ready for slaughter one or two months sooner than a castrated male or a female, and produces proportionately more and leaner muscle.[22]

Frame score is a useful way of describing the skeletal size of bulls and other cattle. Frame scores can be used as an aid to predict mature cattle sizes and aid in the selection of beef bulls. They are calculated from hip height and age. In sales catalogues, this measurement is frequently reported in addition to weight and other performance data such as estimated breed value.[23]

A bull paws up dust in a threat display 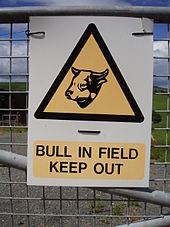 Adult bulls may weigh between 500 and 1,000 kg (1,100 and 2,200 lb). Most are capable of aggressive behavior and require careful handling to ensure safety of humans and other animals. Those of dairy breeds may be more prone to aggression, while beef breeds are somewhat less aggressive, though beef breeds such as the Spanish Fighting Bull and related animals are also noted for aggressive tendencies, which are further encouraged by selective breeding.

An estimated 42% of all livestock-related fatalities in Canada are a result of bull attacks, and fewer than one in 20 victims of a bull attack survives.[24] Dairy breed bulls are particularly dangerous and unpredictable; the hazards of bull handling are a significant cause of injury and death for dairy farmers in some parts of the United States.[25][26][27] The need to move a bull in and out of its pen to cover cows exposes the handler to serious jeopardy of life and limb.[28] Being trampled, jammed against a wall, or gored by a bull was one of the most frequent causes of death in the dairy industry before 1940.[29] With regard to such risks, one popular farming magazine has suggested, "Handle the bull with a staff and take no chances. The gentle bull, not the vicious one, most often kills or maims his keeper".[30]

However, and like other domestic animals, some bulls have saved human lives. For instance, when the wolf-like Beast of Gevaudan terrorized people in France in the 18th century, some people were saved by their bulls. The first recorded sighting in 1764 was by a young woman tending to cattle when the beast charged from the woods. Before it could reach her, the herd bulls charged and fended the beast off twice.[31][self-published source?] 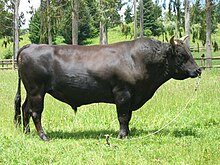 A bull with a nose ring, tethered to a picket

In many areas, placing rings in bulls' noses to help control them is traditional. The ring is usually made of copper, and is inserted through a small hole cut in the septum of the nose. It is used by attaching a lead rope either directly to it or running through it from a head collar, or for more difficult bulls, a bull pole (or bull staff) may be used. This is a rigid pole about 1 m (3 ft) long with a clip at one end; this attaches to the ring and allows the bull both to be led and to be held away from his handler.

An aggressive bull may be kept confined in a bull pen, a robustly constructed shelter and pen, often with an arrangement to allow the bull to be fed without entering the pen. If an aggressive bull is allowed to graze outside, additional precautions may be needed to help avoid his harming people. One method is a bull mask, which either covers the bull's eyes completely, or restricts his vision to the ground immediately in front of him, so he cannot see his potential victim. Another method is to attach a length of chain to the bull's nose-ring, so that if he ducks his head to charge, he steps on the chain and is brought up short. Alternatively, the bull may be hobbled, or chained by his ring or by a collar to a solid object such as a ring fixed into the ground.

In larger pastures, particularly where a bull is kept with other cattle, the animals may simply be fed from a pickup truck or tractor, the vehicle itself providing some protection for the humans involved. Generally, bulls kept with cows tend to be less aggressive than those kept alone. In herd situations, cows with young calves are often more dangerous to humans. In the off season, multiple bulls may be kept together in a "bachelor herd".

Many cattle ranches and stations run bulls with cows, and most dairy or beef farms traditionally had at least one, if not several, bulls for purposes of herd maintenance.[32][33] However, the problems associated with handling a bull (particularly where cows must be removed from his presence to be worked) has prompted many dairy farmers to restrict themselves to artificial insemination (AI) of the cows.[34] Semen is removed from the bulls and stored in canisters of liquid nitrogen, where it is kept until it can be sold, at which time it can be very profitable; in fact, many ranchers keep bulls specifically for this purpose. AI is also used to improve the quality of a herd, or to introduce an outcross of bloodlines. Some ranchers prefer to use AI to allow them to breed to several different bulls in a season or to breed their best stock to a higher-quality bull than they could afford to purchase outright. AI may also be used in conjunction with embryo transfer to allow cattle producers to add new breeding to their herds.

An aurochs bull in a cave painting in Lascaux, France. 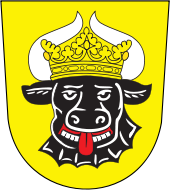 A bull used in heraldry: Coat of arms of Mecklenburg region, Germany

Aside from their reproductive duties, bulls are also used in certain sports, including bullfighting and bull riding. They are also incorporated into festivals and folk events such as the Running of the Bulls and were seen in ancient sports such as bull-leaping. Though less common than castrated males, bulls are used as draught oxen in some areas.[35][36] The once-popular sport of bull-baiting, in which a bull is attacked by specially bred and trained dogs (which came to be known as bulldogs), was banned in England by the Cruelty to Animals Act 1835.

As with other animals, some bulls have been regarded as pets. The singer Charo, for instance, has owned a pet bull named Manolo.[37]

Bulls have held a place of significance in human culture since before the beginning of recorded history. They appear in cave paintings estimated to be up to 17,000 years old. The mythic Bull of the Heavens plays a role in the ancient Sumerian Epic of Gilgamesh, dating as far back as 2150 BC. The importance of the bull is reflected in its appearance in the zodiac as Taurus, and its numerous appearances in mythology, where it is often associated with fertility. See also Korban. In Hinduism, a bull named Nandi, usually depicted seated, is worshipped as the vehicle of the god Shiva and depicted on many of the images of that deity.

Symbolically, the bull appears commonly in heraldry. Bulls appears as charges and crests on the arms of several British families. Winged bulls appear as supporters in the arms of the Worshipful Company of Butchers.[38] In modern times, the bull is used as a mascot by both amateur and professional sports teams.

Retrieved from "http://en.turkcewiki.org/w/index.php?title=Bull&oldid=942452315"
This website is a mirror of Wikipedia, and is not affiliated with the Wikimedia Foundation.
Categories:
Hidden categories: