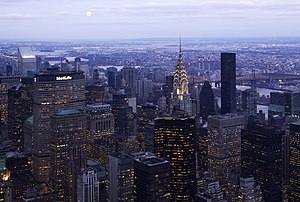 The majority of the "bulge bracket" banks maintain central offices in New York City, considered a financial capital of the world.[1]

Bulge bracket banks usually provide both advisory and financing banking services, as well as the sales, market making, and research on a broad array of financial products including equities, credit, rates, commodities, and their derivatives. They are also heavily involved in the invention of new financial products, such as mortgage-backed securities (MBS) in the 1980s, credit default swaps in the 1990s and collateralized debt obligations (CDO) in the 2000s and today, carbon emission trading and insurance-linked products.

Bulge bracket firms are usually primary dealers in US treasury securities. Bulge bracket banks are also global in the sense that they have a strong presence in all three of the world's major regions: the Americas, Europe, the Middle East and Africa (EMEA), and Asia-Pacific (APAC).

The name comes from the way investment banks are listed on the "tombstone", or public notification of a financial transaction.[3] There is often debate over which banks are considered to belong to the bulge bracket. Membership implies prestige, but there are no precise criteria for inclusion, and financial power is transient. Various rankings are often cited, such as Thomson Reuters league tables, Bloomberg 20, or other league tables.[citation needed]

According to biographer Ron Chernow's 1990 book The House of Morgan, "in the late 1960s and early 1970s, the top tier – called the bulge bracket – consisted of Morgan Stanley; First Boston; Kuhn, Loeb; and Dillon, Read." Morgan Stanley appeared above the other members of the bulge bracket by demanding and receiving the role of syndicate manager. While order within brackets was otherwise determined alphabetically, Chernow describes this positioning as being of "life-and-death" importance to the firms. Chernow says that Bache Halsey Stuart Shields Incorporated's name was chosen based on a desire to be placed as high as possible within its bracket.

For Morgan Stanley, the doomsday trumpet sounded in 1979. That year, IBM asked the firm to accept Salomon Brothers as co-manager on a $1-billion debt issue needed for a new generation of computers... After much resounding talk, nearly everybody [at Morgan Stanley] voted to defy IBM and demand sole management. Morgan Stanley was shocked when word came back that IBM hadn't budged in its demand: Salomon Brothers would head the issue, as planned. It was a landmark in Wall Street history: the golden chains [of Morgan dominance] were smashed.[4]

Retrieved from "http://en.turkcewiki.org/w/index.php?title=Bulge_bracket&oldid=969800618"
This website is a mirror of Wikipedia, and is not affiliated with the Wikimedia Foundation.
Categories:
Hidden categories: