The Scapegoat by William Holman Hunt (1854)

Buck passing, or passing the buck, or sometimes (playing) the blame game, is the act of attributing to another person or group one's own responsibility. It is often used to refer to a strategy in power politics whereby a state tries to get another state to deter or fight an aggressor state while it remains on the sidelines.[1]

The expression is said to have originated from poker in which a marker or counter (such as a knife with a buckhorn handle during the American Frontier era) was used to indicate the person whose turn it was to deal. If the player did not wish to deal he could pass the responsibility by passing the "buck," as the counter came to be called, to the next player.[2]

Passing the buck in international relations theory involves the tendency of nation-states to refuse to confront a growing threat in the hopes that another state will. The most notable example was the refusal of the United Kingdom, United States, France, or the Soviet Union to confront Nazi Germany effectively in the 1930s. With the Munich Agreement, France and the United Kingdom avoided armed confrontation with Germany, passing the buck to the Soviet Union, which then passed the buck back to the western powers by signing the Molotov–Ribbentrop Pact.[3] 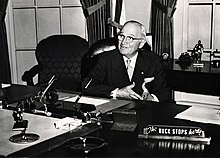 At the recreation of the Truman Oval Office at the Truman Library in 1959, the former President Truman poses by his old desk which has the famous "The Buck Stops Here" sign.

"The buck stops here" is a phrase that was popularized by U.S. President Harry S. Truman, who kept a sign with that phrase on his desk in the Oval Office.[5] The phrase refers to the notion that the President has to make the decisions and accept the ultimate responsibility for those decisions. Truman received the sign as a gift from a prison warden who was also an avid poker player. It is also the motto of the U.S. Naval Aircraft Carrier USS Harry S. Truman (CVN-75).[6]

President Jimmy Carter arranged to borrow the sign from the Harry S. Truman Presidential Library and Museum.[7] Footage from Carter's "Address to the Nation on Energy"[8] shows the sign on the desk during his administration.

Retrieved from "http://en.turkcewiki.org/w/index.php?title=Buck_passing&oldid=1016711992"
This website is a mirror of Wikipedia, and is not affiliated with the Wikimedia Foundation.
Categories: