The British American Land Company ("BALC") was formed in 1832 and promoted by John Galt, Edward Ellice[a] and others to acquire and manage the development of almost 1,100,000 acres (1,719 sq mi; 4,452 km2) of Crown land and other lands in the Eastern Townships of Lower Canada, in order to encourage the immigration of British subjects to the region. In comparison to the Canada Company, a similar enterprise in Upper Canada that thrived through collaboration with the local government, the BALC indulged in land speculation, made immigration a secondary priority, and struggled throughout its existence.[2]

Townships in the Eastern Townships

First colonization roads in the Townships 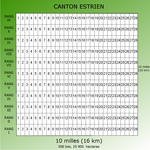 Survey layout for a township

Following the success of the Canada Company in spurring settlement efforts in Upper Canada, similar efforts were initiated to establish a similar company to promote settlement in the Eastern Townships of Lower Canada. A group of investors in Montreal, headed by Francis Nathaniel Burton, proposed organizing a Lower Canada Land Company, and sent William Bowman Felton to London to promote their venture. While there, he encountered a group with similar objectives. The groups decided to combine together, and, at a meeting in February 1832, decided to proceed with creating the British American Land Company.[3][b]

It was incorporated by royal charter in March 1834,[5] and secured a private Act from the Parliament of the United Kingdom,[c] enabling it to:

The following Commissioners would be appointed:[6][7] 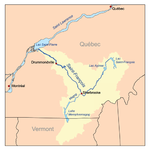 Basin of the Saint-François River 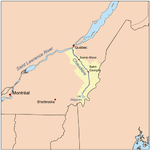 Basin of the Chaudière River
The lands of the British American Land Company were chiefly concentrated between the upper Saint-François, Lake Mégantic on the Chaudière, and the International Boundary

Upon Fraser's appointment in 1835, the Company's activities began in earnest, being concentrated in three places:[13]

Wharves and warehouses were constructed at Port St. Francis, as were grist mills, sawmills and other facilities within the territory.[13] Lands were sold subject to a 20% down payment, with the balance payable in three subsequent annual instalments, and the Company also offered to help clear the land and build a log house upon it for an extra charge.[13] During 1836, during the first year of activity, three hundred families had settled in Victoria, occupying 23,000 acres (35.9 sq mi; 93.1 km2), while 10,000 acres (15.6 sq mi; 40.5 km2) had been sold in other districts.[18]

By deliberately working to increase the English-speaking portion of the population of Lower Canada, it was denounced by the Parti patriote and was referred to in the Ninety-two Resolutions adopted by the Legislative Assembly of Lower Canada in 1834.[k][20] It was also denounced during the Lower Canada Rebellion in 1837, where a proclamation issued by Patriote leader Robert Nelson declared that all unsold Company lands "are of right the property of the State of Lower Canada."[21]

Sherbrooke, where the Saint-François and Magog Rivers meet (1839). The British American Land Company would later exploit the waterpower arising from its water rights to promote the town's industrial development.

The expenses incurred to open up the lands were high in relation to the revenues earned from their subsequent disposition.[22][23] The 1837 Rebellion discouraged immigration to Lower Canada,[6] frightening off the better class of potential immigrants,[l] and many of the current settlers were defaulting on their payments or even abandoning their lands.[18] Many of the local agents were also neglecting their duties or pilfering the company stores,[18] and the Company resisted attempts by local councils to impose property taxes on its holdings.[25] This would eventually lead to the Company experiencing financial problems in 1841, forcing it to return 511,237 acres (799 sq mi; 2,069 km2) of the St. Francis tract to the Province of Canada.[26][m]

In 1843, the Company began focus its efforts on selling land to the local French-Canadian population,[29][n] disposing it on new terms, consisting of no down payment, interest payments only for the first ten years, with the principal then being payable in four equal annual instalments.[31] In the beginning, such obligations could be settled by payment in kind.[32]

Exploitation of natural resources and manufacturing[edit]

The Company's finances would subsequently improve, and its earnings would be invested in other industrial concerns, including railroads,[o] mining[p] and Sherbrooke's textile mills,[38][q] and it would operate other industrial enterprises itself.[r] It would also get into the business of lending money, and, in 1876, the law governing interest was modified with respect to the loans made by the Company, so that it could charge an annual rate up to 8%,[41] in place of the then legal maximum of 6%.[42]

It would also begin to sell landholdings in large blocks for their value as timber. In 1872, it sold 99,833 acres (156 sq mi; 404 km2) to Cyrus Sullivan Clark of Bangor, Maine, who purchased a further 7,901 acres (12 sq mi; 32 km2) from the company in the following year.[43] These holdings were approximately half the size of the Crown timber limits that he already possessed.[43][s]

By 1910, it had sold the greater part of its holdings,[46] but continued to operate until its dissolution in 1948.[47] Most of the Company's records appear to have since been carelessly destroyed.[48]

Retrieved from "http://en.turkcewiki.org/w/index.php?title=British_American_Land_Company&oldid=979166283"
This website is a mirror of Wikipedia, and is not affiliated with the Wikimedia Foundation.
Categories:
Hidden categories: