Brain abscess (or cerebral abscess) is an abscess caused by inflammation and collection of infected material, coming from local (ear infection, dental abscess, infection of paranasal sinuses, infection of the mastoid air cells of the temporal bone, epidural abscess) or remote (lung, heart, kidney etc.) infectious sources, within the brain tissue. The infection may also be introduced through a skull fracture following a head trauma or surgical procedures. Brain abscess is usually associated with congenital heart disease in young children. It may occur at any age but is most frequent in the third decade of life.

Fever, headache, and neurological problems, while classic, only occur in 20% of people with brain abscess.[2]

The most frequent presenting symptoms are headache, drowsiness, confusion, seizures, hemiparesis or speech difficulties together with fever with a rapidly progressive course. Headache is characteristically worse at night and in the morning, as the intracranial pressure naturally increases when in the supine position. This elevation similarly stimulates the medullary vomiting center and area postrema, leading to morning vomiting.

Other symptoms and findings depend largely on the specific location of the abscess in the brain. An abscess in the cerebellum, for instance, may cause additional complaints as a result of brain stem compression and hydrocephalus. Neurological examination may reveal a stiff neck in occasional cases (erroneously suggesting meningitis). 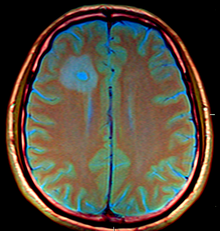 Bacterial abscesses rarely (if ever) arise de novo within the brain, although establishing a cause can be difficult in many cases. There is almost always a primary lesion elsewhere in the body that must be sought assiduously, because failure to treat the primary lesion will result in relapse. In cases of trauma, for example in compound skull fractures where fragments of bone are pushed into the substance of the brain, the cause of the abscess is obvious. Similarly, bullets and other foreign bodies may become sources of infection if left in place. The location of the primary lesion may be suggested by the location of the abscess: infections of the middle ear result in lesions in the middle and posterior cranial fossae;[5] congenital heart disease with right-to-left shunts often result in abscesses in the distribution of the middle cerebral artery;[6][7] and infection of the frontal and ethmoid sinuses usually results in collection in the subdural sinuses.

These organisms are associated with certain predisposing conditions:

MRI (T1 with contrast) showing the ring-enhancing lesion. From a rare case report of an abscess formed as a complication of the CSF shunt. Jamjoom et al., 2009.[1]

The diagnosis is established by a computed tomography (CT) (with contrast) examination. At the initial phase of the inflammation (which is referred to as cerebritis), the immature lesion does not have a capsule and it may be difficult to distinguish it from other space-occupying lesions or infarcts of the brain. Within 4–5 days the inflammation and the concomitant dead brain tissue are surrounded with a capsule, which gives the lesion the famous ring-enhancing lesion appearance on CT examination with contrast (since intravenously applied contrast material can not pass through the capsule, it is collected around the lesion and looks as a ring surrounding the relatively dark lesion). Lumbar puncture procedure, which is performed in many infectious disorders of the central nervous system is contraindicated in this condition (as it is in all space-occupying lesions of the brain) because removing a certain portion of the cerebrospinal fluid may alter the concrete intracranial pressure balances and causes the brain tissue to move across structures within the skull (brain herniation).

Ring enhancement may also be observed in cerebral hemorrhages (bleeding) and some brain tumors. However, in the presence of the rapidly progressive course with fever, focal neurologic findings (hemiparesis, aphasia etc.) and signs of increased intracranial pressure, the most likely diagnosis should be the brain abscess.

Hyperbaric oxygen therapy (HBO2 or HBOT) is indicated as a primary and adjunct treatment which provides four primary functions. Firstly, HBOT reduces intracranial pressure.[8] Secondly, high partial pressures of oxygen act as a bactericide and thus inhibits the anaerobic and functionally anaerobic flora common in brain abscess. Third, HBOT optimizes the immune function thus enhancing the host defense mechanisms and fourth, HBOT has been found to be of benefit when brain abscess is concomitant with cranial osteomyleitis.

Secondary functions of HBOT include increased stem cell production and up-regulation of VEGF which aid in the healing and recovery process.[9]

Surgical drainage of the abscess remains part of the standard management of bacterial brain abscesses. The location and treatment of the primary lesion also crucial, as is the removal of any foreign material (bone, dirt, bullets, and so forth).

There are few exceptions to this rule: Haemophilus influenzae meningitis is often associated with subdural effusions that are mistaken for subdural empyemas. These effusions resolve with antibiotics and require no surgical treatment. Tuberculosis can produce brain abscesses that look identical to conventional bacterial abscesses on CT imaging. Surgical drainage or aspiration is often necessary to identify Mycobacterium tuberculosis, but once the diagnosis is made no further surgical intervention is necessary.

CT guided stereotactic aspiration is also indicated in the treatment of brain abscess. The use of pre-operative imaging, intervention with post-operative clinical and biochemical monitoring used to manage brain abscesses today dates back to the Pennybacker system pioneered by Somerset, Kentucky-born neurosurgeon Joseph Buford Pennybacker, director of the neurosurgery department of the Radcliffe Infirmary, Oxford from 1952 to 1971. [10]

While death occurs in about 10% of cases, people do well about 70% of the time.[2] This is a large improvement from the 1960s due to improved ability to image the head, more effective neurosurgery and more effective antibiotics.[2]

Retrieved from "http://en.turkcewiki.org/w/index.php?title=Brain_abscess&oldid=960853427"
This website is a mirror of Wikipedia, and is not affiliated with the Wikimedia Foundation.
Categories:
Hidden categories: