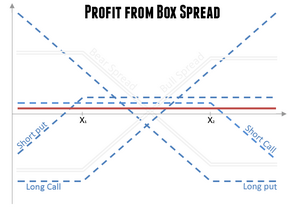 Profit diagram of a box spread. It is a combination of positions with a riskless payoff.

In options trading, a box spread is a combination of positions that has a certain (i.e. riskless) payoff, considered to be simply "delta neutral interest rate position". For example, a bull spread constructed from calls (e.g. long a 50 call, short a 60 call) combined with a bear spread constructed from puts (e.g. long a 60 put, short a 50 put) has a constant payoff of the difference in exercise prices (e.g. 10) assuming that the underlying stock does not go ex-dividend before the expiration of the options. If the underlying asset has a dividend of x, then the settled value of the box will be 10+x.[1] Under the no-arbitrage assumption, the net premium paid out to acquire this position should be equal to the present value of the payoff.

They are often called "alligator spreads" because the commissions “eat up” all your profit due to the large number of trades required for most box spreads.

The box-spread usually combines two pairs of options; its name derives from the fact that the prices for these options form a rectangular box in two columns of a quotation.

A similar trading strategy specific to futures trading is also known as a box or double butterfly spread.

An arbitrage operation may be represented as a sequence which begins with zero balance in an account, initiates transactions at time t = 0, and unwinds transactions at time t = T so that all that remains at the end is a balance whose value B will be known for certain at the beginning of the sequence. If there were no transaction costs then a non-zero value for B would allow an arbitrageur to profit by following the sequence either as it stands if the present value of B is positive, or with all transactions reversed if the present value of B is negative. However, market forces tend to close any arbitrage windows which might open; hence the present value of B is usually insufficiently different from zero for transaction costs to be covered. This is considered typically to be a "Market Maker/ Floor trader" strategy only, due to extreme commission costs of the multiple-leg spread. If the box is for example 20 dollars as per lower example getting short the box anything under 20 is profit and long anything over, has hedged all risk .

Note that directly exploiting deviations from either of these two parity relations involves purchasing or selling the underlying stock.

. The stock price S will disappear if we subtract one equation from the other, thus enabling one to exploit a violation of put/call parity without the need to invest in the underlying stock. The subtraction done one way corresponds to a long-box spread; done the other way it yields a short box-spread. The pay-off for the long box-spread will be the difference between the two strike prices, and the profit will be the amount by which the discounted payoff exceeds the net premium. For parity, the profit should be zero. Otherwise, there is a certain profit to be had by creating either a long box-spread if the profit is positive or a short box-spread if the profit is negative. [Normally, the discounted payoff would differ little from the net premium, and any nominal profit would be consumed by transaction costs.]

The long box-spread comprises four options, on the same underlying asset with the same terminal date. They can be paired in two ways as shown in the following table (assume strike-prices

Reading the table horizontally and vertically, we obtain two views of a long box-spread.

, plus a short strangle at the same pair of strike prices.

A short box-spread can be treated similarly.

Please note that box spread shall be built by European options only. Equity options traded in the United States and many other countries are American options, so investors shall never build a box spread using those options. The following example is only for illustration.

As an example, consider a three-month option on a stock whose current price is $100. If the interest rate is 8% per annum and the volatility is 30% per annum, then the prices for the options might be:

The initial investment for a long box-spread would be $19.30. The following table displays the payoffs of the 4 options for the three ranges of values for the terminal stock price

The terminal payoff has a value of $20 independent of the terminal value of the share price. The discounted value of the payoff is $19.60. Hence there is a nominal profit of 40 cents to be had by investing in the long box-spread.

Surveys done by Chaput and Ederington on the Chicago Mercantile Exchange's market for options on Eurodollar futures showed between 1999 and 2000 some 25% of the trading volume was in outright options, 25% in straddles and vertical spreads (call-spreads and put-spreads), and about 5% in strangles. Guts constituted only about 0.1%, and box-spreads even less (about 0.01%). Ratio spreads took more than 15%, and about a dozen other instruments took the remaining 30%.[citation needed] This is considered typically to be a "Market Maker/Floor trader" strategy only due to extreme commission costs of the multiple leg spread.

In 2019, the online-only brokerage Robinhood changed its policy, disallowing the use of box spreads by its clients due to a single Reddit user known by the handle 1R0NYMAN realizing assignment risk and a resulting -2000% return.[2] Since this was a case of a box spread on American style options, it faced risk of (and ultimately realized) assignment on one leg, requiring replenishment of collateral to support the remaining leg. In this case one of the call options was assigned, so the collateral was expended to purchase the other call option, which left no collateral to support the lingering put credit spread. With no collateral for the remaining spread the put options were closed.

Retrieved from "http://en.turkcewiki.org/w/index.php?title=Box_spread_(options)&oldid=988772066"
This website is a mirror of Wikipedia, and is not affiliated with the Wikimedia Foundation.
Categories:
Hidden categories: