Jump to navigation Jump to search
The character ─ redirects here. It is not to be confused with the em-dash, — Used along with box-drawing characters are block elements, shade characters, and terminal graphic characters. These can be used for filling regions of the screen and portraying drop shadows.

Unicode includes 128 such characters.[1] In many Unicode fonts only the subset that is also available in the IBM PC character set (see below) will exist, due to it being defined as part of the WGL4 character set. 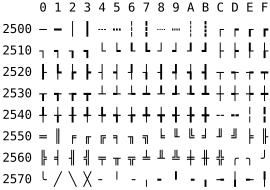 Unicode box-drawing symbols. A rendering showing all 128 symbols (as they should appear in the adjacent chart)

Their number is further limited to 22 on those code pages that replace the 18 "single/double hybrid" characters with other, usually alphabetic, characters (such as code page 850):

Some OEM DOS computers supported other character sets, for example the Hewlett-Packard HP 110 / HP Portable and HP 110 Plus / HP Portable Plus, where in a modified version of the character set box-drawing characters were added in reserved areas of their normal HP Roman-8 character set.[2][3]

On many Unix systems and early dial-up bulletin board systems the only common standard for box-drawing characters was the VT100 alternate character set (see also: DEC Special Graphics). The escape sequence Esc ( 0 switched the codes for lower-case ASCII letters to draw this set, and the sequence Esc ( B switched back:

A Bash script that displays all of the semigraphic characters:

On some terminals, these characters are not available at all, and the complexity of the escape sequences discouraged their use, so often only ASCII characters that approximate box-drawing characters are used, such as - (hyphen-minus), | (vertical bar), _ (underscore), = (equal sign) and + (plus sign) in a kind of ASCII art fashion.

Modern Unix terminal emulators use Unicode and thus have access to the line-drawing characters listed above.

Many microcomputers of the 1970s and 1980s had their own proprietary character sets, which also included box-drawing characters. Some of these sets, such as Commodore's PETSCII, include box-drawing symbols with no corresponding Unicode character.

The Sinclair ZX80, ZX81 and Spectrum included a set of text semigraphics with block elements and dithering patterns.

The BBC Micro could utilise the Teletext 7-bit character set, which had 128 box-drawing characters, whose code points were shared with the regular alphanumeric and punctuation characters. Control characters were used to switch between regular text and box drawing.[4]

MouseText is a set of display characters for the Apple IIc, IIe, and IIgs that includes box-drawing characters.

The CP/M Plus character set used on various Amstrad computers of the CPC, PCW and Spectrum families included a rich set of line-drawing characters as well:[5][6][7]

The World System Teletext (WST) uses pixel-drawing characters for some graphics. A character cell is divided in 2×3 regions, and 26 = 64 code positions are allocated for all possible combinations of "pixels".[8] However, these characters are not included in the Unicode standard.

Sample diagrams made out of the standard box-drawing characters, using a monospaced font:

Retrieved from "http://en.turkcewiki.org/w/index.php?title=Box-drawing_character&oldid=941447772"
This website is a mirror of Wikipedia, and is not affiliated with the Wikimedia Foundation.
Categories:
Hidden categories: