A modern reconstruction, in fiberglass and wood, of a historical composite bow

The bow and arrow is a ranged weapon system consisting of an elastic launching device (bow) and long-shafted projectiles (arrows).

Archery is the art, practice, or skill of using bows to shoot arrows.[1] A person who shoots arrows with a bow is called a bowman or an archer. Someone who makes bows is known as a bowyer,[2] one who makes arrows is a fletcher,[3] and one who manufactures metal arrowheads is an arrowsmith.[4]

Humans used bows and arrows for hunting and violence long before recorded history and was common to many prehistoric cultures. They were important weapons of war from ancient history until the early modern period, where they were rendered increasingly obsolete by the development of the more powerful and accurate firearms, and were eventually dropped from warfare. Today, bows and arrows are mostly used for hunting and sports. 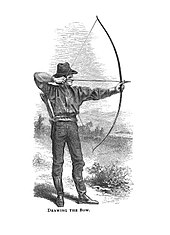 Drawing a bow, from a 1908 archery manual

A bow consists of a semi-rigid but elastic arc with a high-tensile bowstring joining the ends of the two limbs of the bow. An arrow is a projectile with a pointed tip and a long shaft with stabilizer fins (fletching) towards the back, with a narrow notch (nock) at the very end to contact the bowstring.

To load an arrow for shooting (nocking an arrow), the archer places an arrow across the middle of the bow with the bowstring in the arrow's nock. To shoot, the archer pulls back (draws) the arrow and the bowstring, which in turn flexes the bow limbs, storing elastic energy. Typically while maintaining the draw, the archer sights along the arrow to aim it. Finally the archer releases (looses) the arrow, allowing the limbs' stored potential energy to convert into kinetic energy, which is transmitted via the bowstring to the arrow, propelling it to fly forward with high velocity.[5]

A container or bag for additional arrows for quick reloading is called a quiver.

When not in use, bows are generally kept unstrung, meaning one or both ends of the bowstring are detached from the bow. This removes all residual tension on the bow, and can help prevent it from losing strength or elasticity over time. For many bow designs, this also lets it straighten out more completely, reducing the space needed to store the bow. Returning the bowstring to its ready-to-use position is called stringing the bow. 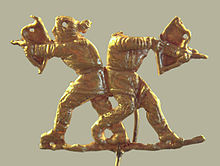 The oldest known evidence of arrows comes from the South African site of Sibudu Cave, where the remains of bone and stone arrowheads have been found dating approximately 60,000-70,000 years ago.[6][7][8][9][10]

In Eurasia, the bow and arrow appears (or reappears) around the transition from the Upper Paleolithic to the Mesolithic. After the end of the last glacial period, use of the bow seems to have spread to every inhabited region, except for Australasia and most of Oceania.[11]

The earliest definite remains of bow and arrow from Europe are possible fragments from Germany found at Mannheim-Vogelstang dated 17,500-18,000 years ago, and at Stellmoor dated 11,000 years ago. Azilian points found in Grotte du Bichon, Switzerland, alongside the remains of both a bear and a hunter, with flint fragments found in the bear's third vertebra, suggest the use of arrows at 13,500 years ago.[12] At the site of Nataruk in Turkana County, Kenya, obsidian bladelets found embedded in a skull and within the thoracic cavity of another skeleton, suggest the use of stone-tipped arrows as weapons about 10,000 years ago.[13] Microliths discovered on the south coast of Africa suggest that projectile weapons of some sort may be at least 71,000 years old; however, these may have been used to tip atlatl darts, rather than arrowheads.[14]

The oldest extant bows in one piece are the elm Holmegaard bows from Denmark which were dated to 9,000 BCE. Several bows from Holmegaard, Denmark, date 8,000 years ago.[15] High-performance wooden bows are currently made following the Holmegaard design. The Stellmoor bow fragments from northern Germany were dated to about 8,000 BCE, but they were destroyed in Hamburg during the Second World War, before carbon 14 dating was available; their age is attributed by archaeological association.[16]

The bow was an important weapon for both hunting and warfare from prehistoric times until the widespread use of gunpowder in the 16th century. Organised warfare with bows ended in the mid 17th century in Europe, but it persisted into the early 19th century in Eastern[clarification needed] cultures and in hunting and tribal warfare in the New World. In the Canadian Arctic bows were made until the end of the 20th century for hunting caribou, for instance at Igloolik.[17] The bow has more recently been used as a weapon of tribal warfare in some parts of Sub-Saharan Africa; an example was documented in 2009 in Kenya when Kisii people and Kalenjin people clashed, resulting in four deaths.[18][19]

The British upper class led a revival of archery from the late 18th century.[20] Sir Ashton Lever, an antiquarian and collector, formed the Toxophilite Society in London in 1781, under the patronage of George, then Prince of Wales. 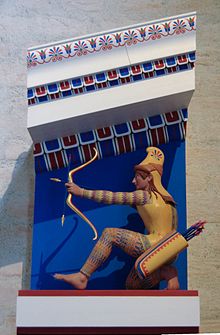 Polychrome small-scale model of the archer XI of the west pediment of the Temple of Aphaea, c. 505–500 BCE.

The basic elements of a bow are a pair of curved elastic limbs, traditionally made from wood, joined by a riser. Both ends of the limbs are connected by a string known as the bow string.[5] By pulling the string backwards the archer exerts compressive force on the string-facing section, or belly, of the limbs as well as placing the outer section, or back, under tension. While the string is held, this stores the energy later released in putting the arrow to flight. The force required to hold the string stationary at full draw is often used to express the power of a bow, and is known as its draw weight, or weight.[21][22] Other things being equal, a higher draw weight means a more powerful bow, which is able to project heavier arrows at the same velocity or the same arrow at a greater velocity.

The various parts of the bow can be subdivided into further sections. The topmost limb is known as the upper limb, while the bottom limb is the lower limb. At the tip of each limb is a nock, which is used to attach the bowstring to the limbs. The riser is usually divided into the grip, which is held by the archer, as well as the arrow rest and the bow window. The arrow rest is a small ledge or extension above the grip which the arrow rests upon while being aimed. The bow window is that part of the riser above the grip, which contains the arrow rest.[5]

A composite bow uses a combination of materials to create the limbs, allowing the use of materials specialized for the different functions of a bow limb. The classic composite bow uses wood for lightness and dimensional stability in the core, horn to store energy in compression, and sinew for its ability to store energy in tension. Such bows, typically Asian, would often use a stiff end on the limb end, having the effect of a recurve.[24] In this type of bow, this is known by the Arabic name 'siyah'.[25]

Schematic of an arrow showing its parts.

An arrow usually consists of a shaft with an arrowhead attached to the front end, with fletchings and a nock at the other.[27] Modern arrows are usually made from carbon fibre, aluminum, fiberglass, and wood shafts. Carbon shafts have the advantage that they do not bend or warp, but they can often be too light weight to shoot from some bows and are expensive. Aluminum shafts are less expensive than carbon shafts, but they can bend and warp from use. Wood shafts are the least expensive option but often will not be identical in weight and size to each other and break more often than the other types of shafts.[28] Arrow sizes vary greatly across cultures and range from very short ones that require the use of special equipment to be shot to ones in use in the Amazon River jungles that are 2.6 m (8.5 feet) long. Most modern arrows are 55 to 75 cm (22 to 30 inches) in length.[27]

For safety reasons, a bow should never be shot without an arrow nocked; without an arrow, the energy that is normally transferred into the projectile is instead directed back into the bow itself, which will cause damage to the bow's limbs.

The end of the arrow that is designed to hit the target is called the arrowhead. Usually, these are separate items that are attached to the arrow shaft by either tangs or sockets. Materials used in the past for arrowheads include flint, bone, horn, or metal. Most modern arrowheads are made of steel, but wood and other traditional materials are still used occasionally. A number of different types of arrowheads are known, with the most common being bodkins, broadheads, and piles.[33] Bodkin heads are simple spikes made of metal of various shapes, designed to pierce armour.[30] A broadhead arrowhead is usually triangular or leaf-shaped and has a sharpened edge or edges. Broadheads are commonly used for hunting.[34] A pile arrowhead is a simple metal cone, either sharpened to a point or somewhat blunt, that is used mainly for target shooting. A pile head is the same diameter as the arrow shaft and is usually just fitted over the tip of the arrow.[35] Other heads are known, including the blunt head, which is flat at the end and is used for hunting small game or birds, and is designed to not pierce the target nor embed itself in trees or other objects and make recovery difficult.[30] Another type of arrowhead is a barbed head, usually used in warfare or hunting.[27]

Bowstrings may have a nocking point marked on them, which serves to mark where the arrow is fitted to the bowstring before shooting.[36] The area around the nocking point is usually bound with thread to protect the area around the nocking point from wear by the archer's hands. This section is called the serving.[37] At one end of the bowstring a loop is formed, which is permanent. The other end of the bowstring also has a loop, but this is not permanently formed into the bowstring but is constructed by tying a knot into the string to form a loop. Traditionally this knot is known as the archer's knot, but is a form of the timber hitch. The knot can be adjusted to lengthen or shorten the bowstring. The adjustable loop is known as the "tail".[38] The string is often twisted (this being called the "flemish twist").

Bowstrings have been constructed of many materials throughout history, including fibres such as flax, silk, and hemp.[39] Other materials used were animal guts, animal sinews, and rawhide. Modern fibres such as Dacron or Kevlar are now used in commercial bowstring construction, as well as steel wires in some compound bows.[40] Compound bows have a mechanical system of pulley cams over which the bowstring is wound.[37] Nylon is useful only in emergency situations, as it stretches too much.[41] 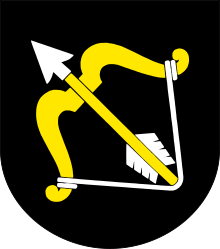 Bow and arrow in heraldry, as depicted in the coat of arms of Northern Savonia (Pohjois-Savo), Finland.

There is no one accepted system of classification of bows.[42] Bows may be described by various characteristics including the materials used, the length of the draw that they permit, the shape of the bow in sideways view, and the shape of the limb in cross-section.[43]

Commonly-used descriptors for bows include:

Retrieved from "http://en.turkcewiki.org/w/index.php?title=Bow_and_arrow&oldid=942848950"
This website is a mirror of Wikipedia, and is not affiliated with the Wikimedia Foundation.
Categories:
Hidden categories: