Borno, also known as Borno State, is a state in north-eastern Nigeria. Its capital and largest city is Maiduguri. The state was formed in 1976 from the split of the North-Eastern State. Until 1991 it contained what is now Yobe State. The motto or slogan of the state is "Home of Peace".[4] Borno is the homeland of the Kanuri people in Nigeria and several other ethnic groups.[5][6]

Borno has been the epicenter of the Islamist group Boko Haram since it began its insurgency in 2009. The conflict in Borno drew media attention in 2009 after clashes between Boko Haram and government security forces in which the founder of Boko Haram Mohammed Yusuf was reportedly captured alongside 300 of its members. Days later Mohammed Yusuf was announced dead after he reportedly attempted to escape from detention.[7][8]

After a decade of protracted conflict that has destroyed economic activities and normal life, the governor of the state Babagana Umara Zulum in 2019 commenced a multi-pronged strategy of his own recruiting 10,000 hunters with "voodoo powers" to help government forces rout the insurgents.[9] 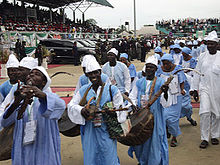 The state has a predominance of Kanuri people. Other ethnic groups such as Lamang, Babur/Bura and Marghi are also found in the southern part of the state. Shuwa Arabs are mainly the descendants of Arab people [10] and is an example of the endurance of traditional political institutions in some areas of Africa, where the emirs of the former Kanem-Bornu Empire have played a part in the politics of this area for nearly 1,000 years.[11] The current Kanemi dynasty gained control of the Borno Emirate in the early 19th century after the Fulani jihad of Usman dan Fodio. Conquered by Rabih in 1893, Borno was invaded by the British, French and Germans at the beginning of the 20th century. In 1902, the British officially incorporated Borno into the Northern Nigeria Protectorate[12] and established a new capital at Maiduguri or Yerwa in 1907, which remains the capital to this day.[13]

After Nigerian independence in 1960, Borno remained fairly autonomous until the expansion of the number of states in Nigeria to 12 in 1967. Local government reform in 1976 further reduced the power of the emirs of the former dynasty, and by the time of Nigeria's return to civilian rule in 1979, the emirs' jurisdiction has been restricted solely to cultural and traditional affairs. The emirs still exist, and serve as advisers to the local government. Mala Kachallah was elected governor of Borno State in 1999 under the flagship of the then APP(All Peoples Party) later ANPP. Ali Modu Sheriff was elected governor of Borno State in Nigeria in April 2003. He is a member of the All Nigeria People's Party (ANPP). Ali Sheriff was the first governor in Borno state to win the seat two consecutive times.[14]

Boko Haram's insurgency began in 2009, with Borno being the worst-affected area. On 14 May 2013, President Goodluck Jonathan declared a state of emergency in northeastern Nigeria,[15] including Borno State along with the neighboring states of Adamawa and Yobe.[16] This happened after fighting between Boko Haram and the state armed forces killed 200 people in the town of Baga. A spokesman for the armed forces declared that the offensive would continue "as long as it takes to achieve our objective of getting rid of insurgents from every part of Nigeria."[17]

In July 2014, Borno State governor Kashim Shettima said that "176 teachers had been killed and 900 schools destroyed since 2011."[18] After the Chibok schoolgirls kidnapping in April 2014, most schools in Borno State were closed. They were scheduled to reopen in November 2014.[19]

In November 2014, UNICEF reported it has increased its Community Management of Acute Malnutrition (CMAM) centres in Borno State "from 5 to 67 and is planning to increase this to 100."[20] In Borno State, the agricultural sector has suffered mostly because of the insurgency and many people experienced acute food insecurity.[21]

A wide variety of Biu–Mandara languages are spoken in Borno State, particular in the Mandara Mountains.[25] Languages of Borno State listed by Local Government Area:[26]

Islam continues to be the dominant faith practiced in Borno State, with much smaller numbers of adherents of Christianity and other faiths spread throughout and living within the region. Sharia operates as the primary foundation for the development, interpretation, and enforcement of most civic codes and laws. The Roman Catholic Diocese of Maiduguri has its seat in the state. Ekklesiar Yan'Uwa A Nigeria (EYN) in Maiduguri were destroyed by Boko Haram[27] as a part of their uprising.

Retrieved from "http://en.turkcewiki.org/w/index.php?title=Borno_State&oldid=971746587"
This website is a mirror of Wikipedia, and is not affiliated with the Wikimedia Foundation.
Categories:
Hidden categories: