(Redirected from Boondall)
Jump to navigation Jump to search
Not to be confused with Bundall, Queensland.
Suburb of Brisbane, Queensland, Australia

Boondall is a northern suburb of the City of Brisbane, Queensland, Australia,[3] formerly known as Cabbage Tree Creek (after the creek that flows through the area).

Situated approximately 13.5 kilometres (8.4 mi) north of Brisbane near Moreton Bay, almost halfway between Brisbane and the coastal city of Redcliffe. Bounded on the north by Deagon, Sandgate and Shorncliffe, on the east by Nudgee and Nudgee Beach, on the south by Banyo, Geebung and Virginia and on the west by Taigum and Zillmere.

The Boondall Wetlands are located in the east of the suburb. These internationally significant wetlands contain more than 1000 hectares of protected area that provide habitat to a wide range of animals including more than 190 species of birds.[4]

A residential zone, Boondall is home to a mix of young and established families and retirees.

Aboriginal and Torres Strait Islander people made up 2.5% of the population.

The median age of the Boondall population was 37 years of age, 1 year below the Australian median.

The name of Boondall is derived from an Aboriginal word meaning either crooked creek or cunjevoi (Alocasia macrorrhiza).[3]

The suburb is also home to the Ice World Boondall, where the Brisbane Blue Tongues of the AIHL used to play before relocating to Bundall Iceland on the Gold Coast.[9] 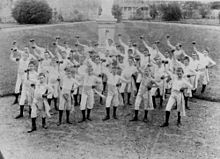 Dumbbell drill on the front lawn of Nudgee College, 1898

Its local school is Boondall State School that has received numerous awards for their educational programs (e.g. ELF Literacy Program). The Internationally recognised and acclaimed St Joseph's College, Nudgee that has produced seven Rhodes scholars is situated in the southern part of Boondall (it was originally within the boundaries of the neighbouring suburb of Nudgee).

Boondall has a number of heritage-listed sites, including:

Retrieved from "http://en.turkcewiki.org/w/index.php?title=Boondall,_Queensland&oldid=970058126"
This website is a mirror of Wikipedia, and is not affiliated with the Wikimedia Foundation.
Categories:
Hidden categories: