Bloomberg Television (on-air as Bloomberg) is an American-based pay television network centred towards business and capital market programming, owned by Bloomberg L.P.[2] It is distributed globally, reaching over 310 million[3][4] homes worldwide. It is headquartered in New York City, with European headquarters in London and Asian headquarters in Hong Kong.

Most of the channels listed are not directly operated by Bloomberg, but are operated by local companies who franchise the Bloomberg brand and may take some of its English-language programming.

Bloomberg Television first launched in the United States on January 1, 1994 under the name Bloomberg Information TV, before it was shortened to its current name in 1998. Shortly after Bloomberg's launch, the now-defunct American Independent Network carried a simulcast of the channel at various times each weekday from 1995 to 1997, which was picked up by some broadcast stations in early morning periods to provide a de facto morning business show. The network's morning pre-opening bell programming was also aired on the USA Network, simulcasted in a paid programming arrangement with the channel until 2004, when that network dropped the simulcast months before the NBC Universal merger was consummated, due to concerns that USA would then air the coverage of a competitor to future sister network CNBC. The simulcast then moved to E! (which became NBCUniversal-owned in January 2011 due to that company's purchase by Comcast), where it remained until the simulcast ended in January 2009, when the network had expanded its reach on digital cable systems enough to discontinue the simulcast. During its time on E!, the 5–8 a.m. block was the most watched period for the network, according to Nielsen Media Research.

Bloomberg Television's U.S. network debuted a new graphics package in January 2009. This current scheme was first used on the network's now-defunct pre-market program, Starting Bell, before the new graphics expanded to all of the network's programs on February 17, 2009. Also on that date, Bloomberg U.S. revamped its weekday programming lineup (see "Programs on Bloomberg" below).

Bloomberg launched a high definition simulcast feed on May 9, 2011, with Time Warner Cable as the first provider to carry it.[9] In mid-April 2013, DIRECTV started carrying Bloomberg HD.

As of July 2014, Bloomberg Television's standard-definition feed now shows a down-scaled version of its native HD feed, with the 16:9 letterbox picture on its 4:3 SD feed.

In February 2009, Bloomberg Television announced that it would cease operating some of the international variations of the channel, placing a greater focus on a more international Bloomberg channel.[10]

On March 9, 2009, the localized channels available in Germany, France, Italy and Spain ceased operations. Today, throughout Europe, the original pan-European version of Bloomberg Europe (International) is available on cable and digital television providers.

Bloomberg Japan ceased broadcasting on April 30, 2009. The channel was then replaced by Bloomberg Asia (International).[11] Bloomberg Japan's Japanese language print newsroom and website continue to operate as normal. In June 2009, the Japanese service began running small on-air segments in cooperation with BS-Fuji Television. In October 2009, segments produced with the Tokyo Broadcasting System were added.[12] Bloomberg Brazil and Bloomberg Latin America were integrated into the global Bloomberg channel during 2009.

In November 2011, Bloomberg announced the formation of "Bloomberg TV Mongolia" in partnership with Trade and Development Bank of Mongolia (TDB), the oldest and one of the largest commercial banks in Mongolia.[15] The channel offers a mix of locally produced, Mongolian language content as well as English language news from Bloomberg Television.

In February 2015, Bloomberg partnered with Canadian media company Channel Zero to form Bloomberg TV Canada, which featured U.S. Bloomberg Television programming and Canadian-produced studio programs produced from Bloomberg's Brookfield Place studio and other Canadian bureaus. The channel replaced the U.S. service on Canadian television providers.[16][17] The channel shut down in October 2017, after which Bloomberg entered into a partnership with Bell Media's Business News Network (BNN), to co-brand the channel as BNN Bloomberg, and grant the company rights to distribute its television and radio content in Canada. The co-branded service will augment BNN's existing business day programming with additional Bloomberg programs to handle coverage of international markets, and access to its bureaus.[18][19][20] 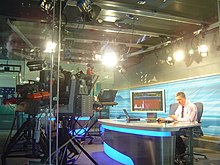 In the United Kingdom, Bloomberg Television was severely reprimanded for breach of Ofcom rules during the 2005 UK national (General) election. Bloomberg was found to have shown pro-Labour Party bias.[26] This occurred because of a breach of British law. In the run up to a general election, television channels must provide equal time to all major political parties. Bloomberg covered the release by the Labour Party of their so-called "Business Manifesto", but did not provide counterbalancing air time to the Conservatives or Liberal Democrats.

Bloomberg was well known for using a datascreen format that occupied most of the television screen and the camera shots. Until 1998, Bloomberg did not have a moving ticker. Instead, it had boxes that were dedicated to world news, as well as weather conditions in selected cities, in addition to market data which was confined to the bottom of the screen. This changed gradually to focus more on business news. The data screen was reformatted several times to include a moving stock ticker and accommodate new graphics.[citation needed]

The datascreen format was phased out in late 2007, where the programs were seen almost in full-screen with the ticker and headlines bar confined to the lower part of the screen. However, Bloomberg HD (available in the US only) features more data boxes on the right side of the screen compared to its SD counterpart. This effectively makes on-screen presentation on Bloomberg HD resemble the pre-2007 datascreen.[citation needed]

On Monday September 22, 2014, Bloomberg Television dropped the long-standing live stock ticker as part of the new on screen information format. No reason for this was given.[citation needed]

As of February 2019, the audio simulcast of Bloomberg TV is distributed on Entercom's Radio.com website and app.[33]

Retrieved from "http://en.turkcewiki.org/w/index.php?title=Bloomberg_Television&oldid=972700698"
This website is a mirror of Wikipedia, and is not affiliated with the Wikimedia Foundation.
Categories:
Hidden categories: