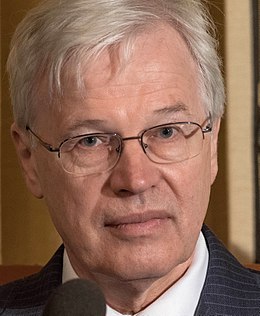 Bengt Robert Holmström (born 18 April 1949) is a Finnish economist who is currently Paul A. Samuelson Professor of Economics at the Massachusetts Institute of Technology. Together with Oliver Hart, he received the Central Bank of Sweden Nobel Memorial Prize in Economic Sciences in 2016.[2]

Holmström was born in Helsinki, Finland on April 18, 1949, and belongs to the Swedish speaking minority of Finland.[3] He received his B.S. in mathematics and science from the University of Helsinki in 1972.[4] He also received a Master of Science degree in Operations Research from Stanford University in 1975.

Holmström is particularly well known for his work on principal-agent theory. More generally, he has worked on the theory of contracting and incentives especially as applied to the theory of the firm, to corporate governance and to liquidity problems in financial crises. He praised the taxpayer-backed bailouts by the US government during the financial crisis of 2007–2008 and emphasizes the benefits of opacity in the money market.[6]

Holmström is a fellow of the American Academy of Arts and Sciences, the Econometric Society and the American Finance Association, and a foreign member of the Royal Swedish Academy of Sciences and the Finnish Academy of Science and Letters. In 2011, he served as President of the Econometric Society. He holds honorary doctorate degrees from the Stockholm School of Economics, Sweden, the University of Vaasa and the Hanken School of Economics in Finland.

He was awarded the 2012 Banque de France-TSE Senior Prize in Monetary Economics and Finance, the 2013 Stephen A. Ross Prize in Financial Economics and the 2013 Chicago Mercantile Exchange – MSRI Prize for Innovative Quantitative Applications.

In 2016, Holmström won the Sveriges Riksbank Prize in Economic Sciences in Memory of Alfred Nobel together with Oliver Hart "for their contributions to contract theory".[10]

He is married to Anneli Holmström[11] with one son.[3]

Retrieved from "http://en.turkcewiki.org/w/index.php?title=Bengt_Holmström&oldid=944505297"
This website is a mirror of Wikipedia, and is not affiliated with the Wikimedia Foundation.
Categories:
Hidden categories: