Belitung (or in English, Billiton) is an island on the east coast of Sumatra, Indonesia in the Java Sea. It covers 4,800.6 km2 (1,853.5 sq mi), and had a population of 271,868 in 2014. Administratively, it forms part of the province of Bangka-Belitung Islands. The island is known for its pepper and for its tin. It was in the possession of the United Kingdom from 1812 until Britain ceded control of the island to the Netherlands in the Anglo-Dutch Treaty of 1824. Its main town is Tanjung Pandan.

The population was 262,357 at the 2010 Census;[1] the latest official estimate (as in 2014) is 271,868. The population is centred in several small towns; the largest are Tanjung Pandan in the west and Manggar in the east, which are the respective capitals of the two Regencies (Belitung and Belitung Timur) into which the island is administratively divided. While ethnic Bangka Malays people make up the largest percentage along with Chinese people, Belitung has significant populations of Bugis, Sundanese, and Javanese people who formerly worked for the Dutch, mining tin. There is also a small population of Madurese who were settled there in the Suharto era transmigration.

Before the arrival of Dutch missionaries, the island's inhabitants and most of the Indonesian archipelago had already converted from Hinduism, Buddhism, and Animism to Islam due to the work of Chinese Muslim traders. As a result, Christian churches were unable to gain considerable numbers of followers.[citation needed] Today, Belitung is a religiously diverse island. Sunni Islam is the most widely practised religion, with sizeable minorities of Buddhists, Christians and Confucianists.[citation needed]

Online taxi services such as Go-Jek and Grab are available, as well as regular taxicab such as the Taxi Bandara (Airport Taxi) and Street Taxi.

Belitung is a medium-sized island, at about 1,840 square miles (4,800 km2); it consists of moderately rugged terrain with several hills. The highest one is Mount Tajam with a height of less than 500 metres (1,600 ft). Belitung is bordered by the Gaspar Strait, the South China Sea and the Java Sea. Its turquoise blue sea is moderately calm and shallow, making for great sailing, snorkeling and swimming. Belitung is popular for its abstract granite boulders and brilliant white sand beaches in Tanjung Tinggi, Tanjung Kelayang, Tanjung Binga and Lengkuas island. 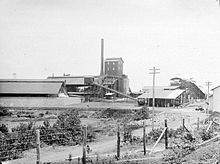 Part of the plant of NV Billiton Maatschappij company in Belitung island (ca. 1939)

Belitung is a source of tin, clay, iron ore and silica sands. The Dutch mining company NV Billiton Maatschappij derives its name from the island's name. Billiton merged with BHP in 2001 to form the largest diversified resources company, BHP Billiton.

The island is also a producer of fishery products, pepper, coconut, and palm oil. People work as farmers, fishermen and miners. The island is easily accessible with eight daily 1-hour flights from Jakarta and 2 daily flights, with duration of 30 minutes and 50 minutes each, from Pangkal Pinang.

The white sand beaches and offshore islands are helping tourism to become a larger part of the economy.

The main tourist destinations are beaches and offshore islands/islets. The beaches are Tanjung Tinggi Beach and Tanjung Kelayang Beach, both of which have clear blue water, sand, and rocky beaches. The islands/islets are Batu Berlayar Island, which is mostly granite, Pasir Island, which is a tidal island made of sand (= pasir in Indonesian language), Bird Islet (Pulau Burong, which one can access from Tanjung Binga beach by walking at low tide, Lengkuas Island, which is the home of a 129-year-old lighthouse and a good place for snorkeling, and Babi Island and Kelayang Islet.[2][3][4]

Retrieved from "http://en.turkcewiki.org/w/index.php?title=Belitung&oldid=946161372"
This website is a mirror of Wikipedia, and is not affiliated with the Wikimedia Foundation.
Categories:
Hidden categories: