Behavioral neuroscience, also known as biological psychology,[1] biopsychology, or psychobiology,[2] is the application of the principles of biology to the study of physiological, genetic, and developmental mechanisms of behavior in humans and other animals.[3]

Behavioral neuroscience as a scientific discipline emerged from a variety of scientific and philosophical traditions in the 18th and 19th centuries. In philosophy, people like René Descartes proposed physical models to explain animal as well as human behavior. Descartes suggested that the pineal gland, a midline unpaired structure in the brain of many organisms, was the point of contact between mind and body. Descartes also elaborated on a theory in which the pneumatics of bodily fluids could explain reflexes and other motor behavior. This theory was inspired by moving statues in a garden in Paris.[4] Electrical stimulation[5] and lesions can also show the affect of motor behavior of humans. They can record the electrical activity of actions, hormones, chemicals and effects drugs have in the body system all which affect ones daily behavior. 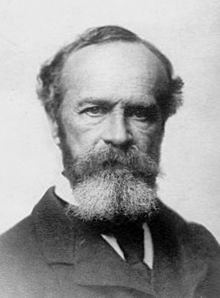 Other philosophers also helped give birth to psychology. One of the earliest textbooks in the new field, The Principles of Psychology by William James, argues that the scientific study of psychology should be grounded in an understanding of biology.

The emergence of psychology and behavioral neuroscience as legitimate sciences can be traced from the emergence of physiology from anatomy, particularly neuroanatomy. Physiologists conducted experiments on living organisms, a practice that was distrusted by the dominant anatomists of the 18th and 19th centuries.[6] The influential work of Claude Bernard, Charles Bell, and William Harvey helped to convince the scientific community that reliable data could be obtained from living subjects.

Even before the 18th and 19th century, behavioral neuroscience was beginning to take form as far back as 1700 B.C.[7] The question that seems to continually arise is: what is the connection between the mind and body? The debate is formally referred to as the mind-body problem. There are two major schools of thought that attempt to resolve the mind–body problem; monism and dualism.[4] Plato and Aristotle are two of several philosophers who participated in this debate. Plato believed that the brain was where all mental thought and processes happened.[7] Contrastly, Aristotle believed that the brain served the purpose of cooling down the emotions derived from the heart.[4] The mind-body problem was a stepping stone toward attempting to understand the connection between the mind and body.

The term "psychobiology" has been used in a variety of contexts, emphasizing the importance of biology, which is the discipline that studies organic, neural and cellular modifications in behavior, plasticity in neuroscience, and biological diseases in all aspects, in addition, biology focuses and analyzes behavior and all the subjects it is concerned about, from a scientific point of view. In this context, psychology helps as a complementary, but important discipline in the neurobiological sciences. The role of psychology in this questions is that of a social tool that backs up the main or strongest biological science. The term "psychobiology" was first used in its modern sense by Knight Dunlap in his book An Outline of Psychobiology (1914).[8] Dunlap also was the founder and editor-in-chief of the journal Psychobiology. In the announcement of that journal, Dunlap writes that the journal will publish research "...bearing on the interconnection of mental and physiological functions", which describes the field of behavioral neuroscience even in its modern sense.[8]

Relationship to other fields of psychology and biology[edit]

The distinguishing characteristic of a behavioral neuroscience experiment is that either the independent variable of the experiment is biological, or some dependent variable is biological. In other words, the nervous system of the organism under study is permanently or temporarily altered, or some aspect of the nervous system is measured (usually to be related to a behavioral variable).

Computational models - Using a computer to formulate real-world problems to develop solutions.[27] Although this method is often focused in computer science, it has begun to move towards other areas of study. For example, psychology is one of these areas. Computational models allow researchers in psychology to enhance their understanding of the functions and developments in nervous systems. Examples of methods include the modelling of neurons, networks and brain systems and theoretical analysis.[28] Computational methods have a wide variety of roles including clarifying experiments, hypothesis testing and generating new insights. These techniques play an increasing role in the advancement of biological psychology.[29]

Different manipulations have advantages and limitations. Neural tissue destroyed as a primary consequence of a surgery, electric shock or neurotoxin can confound the results so that the physical trauma masks changes in the fundamental neurophysiological processes of interest. For example, when using an electrolytic probe to create a purposeful lesion in a distinct region of the rat brain, surrounding tissue can be affected: so, a change in behavior exhibited by the experimental group post-surgery is to some degree a result of damage to surrounding neural tissue, rather than by a lesion of a distinct brain region.[30][31] Most genetic manipulation techniques are also considered permanent.[31] Temporary lesions can be achieved with advanced in genetic manipulations, for example, certain genes can now be switched on and off with diet.[31] Pharmacological manipulations also allow blocking of certain neurotransmitters temporarily as the function returns to its previous state after the drug has been metabolized.[31]

In general, behavioral neuroscientists study similar themes and issues as academic psychologists, though limited by the need to use nonhuman animals. As a result, the bulk of literature in behavioral neuroscience deals with mental processes and behaviors that are shared across different animal models such as:

However, with increasing technical sophistication and with the development of more precise noninvasive methods that can be applied to human subjects, behavioral neuroscientists are beginning to contribute to other classical topic areas of psychology, philosophy, and linguistics, such as:

Behavioral neuroscience has also had a strong history of contributing to the understanding of medical disorders, including those that fall under the purview of clinical psychology and biological psychopathology (also known as abnormal psychology). Although animal models do not exist for all mental illnesses, the field has contributed important therapeutic data on a variety of conditions, including:

Listen to this article (info/dl)

This audio file was created from a revision of the article "Behavioral neuroscience" dated 2006-12-18, and does not reflect subsequent edits to the article. (Audio help)
More spoken articles
Retrieved from "http://en.turkcewiki.org/w/index.php?title=Behavioral_neuroscience&oldid=929442461"
This website is a mirror of Wikipedia, and is not affiliated with the Wikimedia Foundation.
Categories:
Hidden categories: