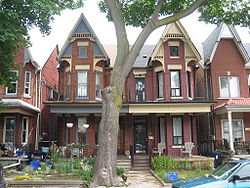 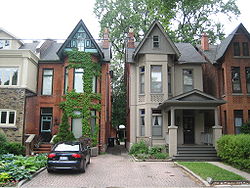 Bay-and-gable houses in The Annex

A bay-and-gable is a distinct architectural style of house that is ubiquitous in older neighbourhoods of Toronto, Ontario, Canada. The most prominent feature is the large bay window that usually covers more than half of the front of the house, surmounted by a gable roof. The classic bay and gable is a red brick semi-detached structure that is two and a half storeys tall, though many variations also exist. It was one of the most common forms of house built in late nineteenth and early twentieth century Toronto. The older parts of the city such as Cabbagetown and Little Italy are still home to many hundreds of examples.

The style was well suited to the layout of the city and the tastes of Torontonians. Old Toronto was laid out with very long and narrow lots, usually only 13 to 20 feet (6.1 m) wide. The tall narrow bay-and-gable house was ideally suited to this environment. High ceilings and large windows allowed light to still reach the depths of the house. Toronto architectural tastes in this era were dominated by the various Victorian Revival styles, especially Gothic Revival. The steep roofs and sharp vertical lines of the bay-and-gable imitated the Gothic style in a way that was affordable to middle class homeowners. For homeowners who wanted more ornamentation, the gables and large windows both provided areas that could be elaborately decorated. Stained glass windows are common in bay-and-gables, as are bargeboards running along the gables and terracotta tiles with ornamental motifs and designs. In some cases, only the front of the house would be given a brick façade in order to save money, with the back and sides done in siding.

The style was also very flexible. The typical bay-and-gable house was made out of brick, but ones made completely out of wood were also easily produced. Bay-and-gable houses were most often built as semi-detached buildings, but the basic design could also easily be modified into a stand-alone or row house format and many examples of both exist in Toronto. There are many variations on the bay-and-gable found in Toronto. One of the most common simplifications on the style is to replace the bay window with a flat wall.

The style faded as modernism was embraced in the years after the Second World War. It still remains popular among Toronto residents. In older areas of the city several new infill projects have been built in the bay-and-gable style. In the northeastern suburb of Markham, there are subdivisions filled with bay-and-gable houses modified to incorporate a two car garage.[1]

The houses can also be found in the older downtown areas of Hamilton, Ontario and Kingston, Ontario.

Retrieved from "http://en.turkcewiki.org/w/index.php?title=Bay-and-gable&oldid=936552509"
This website is a mirror of Wikipedia, and is not affiliated with the Wikimedia Foundation.
Categories:
Hidden categories: