Jump to navigation Jump to search
City in Maharashtra, India

pronunciation (help·info)is a city and a municipal council in Pune district in the state of Maharashtra, India. It is also the home town of the famous marathi Poet Kavivarya Moropant and former Chief Minister of Maharashtra and former Union Minister, Sharad Pawar (NCP founder and chief).

Industries in Baramati vary from textile to dairy and food products. Similarly, there are many foreign companies in Baramati like Piaggio, Ferrero and Dynamix Dairy, Baramati. The oldest plant in Baramati MIDC is the Kalyani Steels. Likewise, recent additions to the list of industries are Bharat Forge, Ferrero Rocher, and Bauli India.[3]

Baramati and surrounding areas mostly depend on agriculture as the main source of income. The land in the region is moderately irrigated because of the Nira Left Canal irrigation from the Veer Dam. Nira River and Karha River also provide direct irrigation water to the farms.

Main crops include Sugarcane, Grapes, Jowar, Cotton and Wheat. Grapes and Sugar are exported from here. There is a huge marketplace for cotton and food grains in the city.

Baramati MIDC has a Baramati Hi-Tech Textile Park Ltd., set up over a sprawling 60-acres of land which houses small domestic garment manufacturers, consisting of a comprehensive group of textile oriented units specializing in functions such as garment-making, Apparel Printing & Packaging, Home Furnishing, Embroidery and Technical textile within the Textile Park. It also has a series of smaller units available as ancillary support units.

Baramati has an airstrip near MIDC. 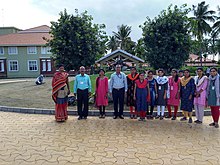 Baramati is well connected by road with major cities in the State. It is 100 km from Pune by road. It connects to major highways via the road network. Baramati is also well connected by the rail network to Pune via Daund Junction. Baramati has two bus stands, with main bus stand located at the Indapur road. Baramati bus depot provides buses to school children.

Baramati has an airport (Baramati Airport) which currently hosts a Flying School. Baramati is considered to be one of the future domestic airports in the region, with the runway being extended in length to accommodate larger aircraft. As of now, smaller aircraft and helicopters are able to land there. This airport is around 8 k.m. away from the Baramati situated in the part of Baramati industrial area (MIDC).

The condition of roads in the city is very good and there is a ring road built around the periphery of the city. This ring road is very useful for the heavy vehicles. They need not entered in the heart of the city. Because of this road facility there is no traffic jams in the internal part of the city.

Baramati has created a niche for itself in the field of education. Last decade has seen growth of Baramati as a Prominent Education Center with colleges and schools ranging from Engineering to Biotechnology to Law.

Government Medical College, Baramati was started in 2019 in MIDC area.

Baramati and the surrounding area has three major places which have become well known education centers. Vidya Pratishthan[6] offers courses from primary education to master's degrees which Established in June 1994. It is Permanently affiliated to Savitribai Phule Pune University, Pune MS India. It hasTotal campus area 27 acres including built up area 109265 Sq.mt. Vidyanagari has a Law College, College of Engineering,[7] School of Bio Technology, Institute of Information Technology, MBA, MCA apart from Primary School and Arts, Commerce, Science College. Tuljaram Chaturchand College [8] (aka TC College) has a junior and a senior college with well equipped staff following the latest trends in the market. The senior college provides graduation in science, commerce and arts.

Baramati also has one Technical High-school, R. N. Agarwal Technical high-school, which offers different technical courses like carpentry, wiring, welding, engineering drawing, computer science and many other courses which are useful to make one's engineering base strong enough at the school level and to make it more easier to understand engineering courses.

The construction of Medical College is located on way near Baramati club, Bhigwan road.

Few kilometres away from Baramati, near to Malegaon Khurd, is home to the National Institute of Abiotic Stress Management (NIASM).[10]

Shri Mayureshwar Mandir or Shri Moreshwar Mandir also known as Morgaon Ganpati is a Hindu temple (mandir) dedicated to Lord Ganesha, the elephant-headed god of wisdom. It is located in Morgaon (Marathi: मोरगाव) Baramati in Pune District, about 35 km away from Baramati city in the Indian state of Maharashtra.[1] The temple is the starting and ending point of a pilgrimage of the eight revered Ganesha temples called Ashtavinayaka.

Bhigwan is a small town 25 km from Baramati. It can be reached from Bhigwan by state transport bus from Baramati. Bhigwan bird sanctuary is 10 km away from Bhigwan town but it is difficult to reach by public transportation. There are two places with several type of migratory birds: Diksal and Kumbhargaon. There is a dam called Ujani. The backwater is spread in nearest parts of the villages. These birds can be found around this backwater area of Diksal. Diksal is 7 km away from Bhigwan. Small fishing boats can be hired for watching more birds. An outdoor activity where tourists look for pink flamingos and more at the Bhigwan bird sanctuary on a full-day tour from Pune. In addition to seeing a variety of India's bird species, visit the historic Bhuleshwar Temple along the way.

Agricultural center situated in Malegaon about 7 km from Baramati. NIASM at Malegaon Khurd, Baramati. It also has agri-tourism, and people from outside of Baramati can visit KVK.

Awesome river side with natural beauty located at Sangavi beside river Nira. It is Sangavi's one of the famous "Youth Organization"

Shri Shirsai Mandir is a Hindu temple dedicated to Goddess Shirsai. It is located in Shirsuphal, Baramati in Pune District, about 27.4 km from Baramati city in the Indian state of Maharashtra. There are many Monkeys in this temple as well as in this village Shirsuphal.This village is also called as "Monkeys Village".

Shri Janai Mandir is a Hindu temple dedicated to Goddess Janai. It is located in Katphal, Baramati in Pune District, about 7 km from Baramati city in the Indian state of Maharashtra.

Retrieved from "http://en.turkcewiki.org/w/index.php?title=Baramati&oldid=958046611"
This website is a mirror of Wikipedia, and is not affiliated with the Wikimedia Foundation.
Categories:
Hidden categories: