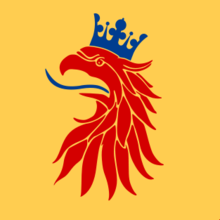 The official flag of Scania, one of Sweden's traditional provinces, is a banner of arms.

A banner of arms is a type of heraldic flag which has the same image as a coat of arms, i.e. the shield of a full heraldic achievement, rendered in a square or rectangular shape of the flag.[1]

The term is derived from the terminology of heraldry but mostly used in vexillology. Examples of modern national flags which are banners of arms are the flags of Austria, Iraq, and Switzerland.

The banner of arms is sometimes simply called a banner, but a banner is in a more strict sense a one of a kind personal flag of a nobleman held in battle.[2][3]

Retrieved from "http://en.turkcewiki.org/w/index.php?title=Banner_of_arms&oldid=962521839"
This website is a mirror of Wikipedia, and is not affiliated with the Wikimedia Foundation.
Categories:
Hidden categories: