Jump to navigation Jump to search
Suburb of a large city; especially used for France 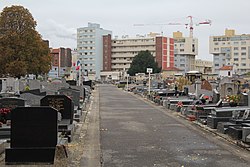 Example of a low-income banlieue Saint-Ouen-sur-Seine 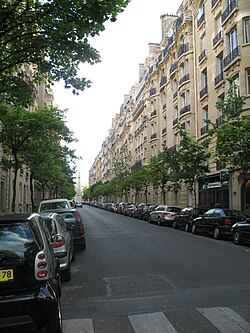 Example of a high-income banlieue Neuilly-sur-Seine

listen)) is a suburb of a large city. Banlieues are divided into autonomous administrative entities and do not constitute part of the city proper. For instance, 80% of the inhabitants of the Paris Metropolitan Area live outside the city of Paris.[2] Like the city centre, suburbs may be rich, middle-class or poor—Versailles, Le Vésinet, Sceaux, Maisons-Laffitte and Neuilly-sur-Seine are affluent banlieues of Paris, while Clichy-sous-Bois, Bondy and Corbeil-Essonnes are less so. However, since the 1970s, banlieues has taken on an additional meaning in French of France, becoming a popular word for low-income housing projects (HLMs) in which many French of foreign descent reside, in what are often called poverty traps.[3] 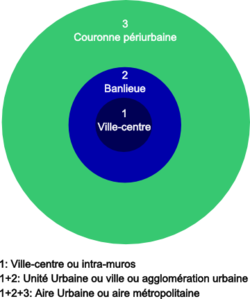 In France, since the establishment of the Third Republic at the beginning of the 1870s, communities beyond the city centre essentially stopped spreading their own boundaries, as a result of the extension of the larger Paris urban agglomeration. The city – which in France corresponds to the concept of the "urban unit" – does not necessarily have a correspondence with a single administrative location, and instead includes other communities that link themselves to the city centre and form the banlieues.

Since annexing the banlieues of major French cities during the Second Empire period (Lyon in 1852, Lille in 1858, Paris in 1860, Bordeaux in 1865), the French communities have in effect extended their boundaries very little beyond their delimitations, and have not followed the development of the urban unit existing prior to 1870 as well as almost all large and mid-sized cities in France having a banlieue develop a couronne pėriurbaine (in English: near-urban ring).

Communities in the countryside beyond the near-urban ring are regarded as being outside the city's strongest social and economic sphere of influence, and are termed communes périurbaines. In either case, they are divided into numerous autonomous administrative entities.

Banlieues 89, a design-led urban policy backed by the French government, renovated over 140 low-cost estates, such as Les Minguettes and the Mas du Taureau block in Vaulx-en-Velin. Improvements were made in road and rail access, cafes and shops were built, and the towers and blocks were made to look more attractive. In Vaulx-en-Velin, for instance, shops and a library were built, houses were built to make the landscape more interesting, 2,500 homes were renovated, and the blocks were repainted.[4] 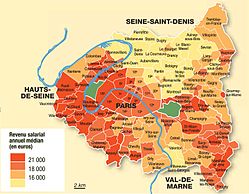 Middle-class and upper-class residents essentially live in the west of the city, while the northeast has a concentration of residents who are immigrants and who live in poverty.

The word banlieue is, in formal use, a socially neutral term, designating the urbanized zone located around the city centre, comprising both sparsely and heavily populated areas. Therefore, in the Parisian metropolitan area, for example, the wealthy suburb of Neuilly-sur-Seine may be referred to as a banlieue as might the poor suburb of La Courneuve. To distinguish them, Parisians refer to a banlieue aisée (in English: comfortable suburb) for Neuilly, and to a banlieue défavorisée (in English: disadvantaged suburb) for Clichy-sous-Bois.

The Paris region can be divided into several zones. In the northwest and the northeast, many areas are vestiges of former working-class and industrial zones, in the case of Seine-Saint-Denis and Val-d'Oise. In the west, the population is generally upper class, and the centre of business and finance, La Défense, is also located there.

The southeast banlieues are less homogenous. Close to Paris, there are many communities that are considered "sensitive" or unsafe (Bagneux, Malakoff, Massy, Les Ulis), divided by residential zones with a better reputation (Verrières-le-Buisson, Bourg-la-Reine, Antony, Fontenay-aux-Roses, Sceaux).

The farther away from the Paris city centre, the more the banlieues of the south of Paris can be divided into two zones. On one side, there are the banks of the Seine, where working-class residents used to live (there are still pockets of disadvantaged areas) but also other areas that are especially well off. Also are large cities close to Paris, such as Chanteloup-les-Vignes, Sartrouville, Les Mureaux, Mantes-la-Jolie, Poissy, Achères, Limay, Trappes, Aubergenville, Évry-Courcouronnes, Grigny, Corbeil-Essonnes, Saint-Michel-sur-Orge, Brétigny-sur-Orge, Sainte-Geneviève-des-Bois and Fleury-Mérogis.

Small communities that are socially disparate can be found in the Yvelines department with Villennes-sur-Seine, Chatou, Croissy-sur-Seine, Le Pecq, Maisons-Laffitte but also in the Essonne and Seine-et-Marne departments: Etiolles, Draveil, Soisy-sur-Seine, Saint-Pierre-du-Perray or Seine-Port.

The banlieues rouges ("red banlieues") are the outskirt districts of Paris where, traditionally, the French Communist Party held mayorships and other elected positions. Examples of these include Ivry-sur-Seine, and Malakoff. Such communities often named streets after Soviet personalities, such as rue Youri Gagarine.

The banlieues of large cities like Lyon and Marseille, especially those around Paris (with a metropolitan area population of 12,223,100 inhabitants), are severely criticized and forgotten by the country's territorial spatial planning administration. Ever since the French Commune government of 1871, they were and still are often ostracised and considered by other residents as places that are "lawless" or "outside the Republic", as opposed to "deep France", or "authentic France" associated with the provinces.[5] However, it is in the banlieues that the young working households are found that raise children and pay taxes but lack in public services, in transportation, education, sports, as well as employment opportunities.[6]

In the summer of 1981, events involving young Franco-Maghrebis brought about many different reactions from the French public.[7] Within the banlieues, events, called rodeos, would occur, where young "banlieusards" would steal cars and perform stunts and race them. Then, before the police could catch them, they would abandon the cars and set them on fire.[7]

In July and August 1981, around 250 cars were vandalized. Shortly afterward, grass- roots groups began to demonstrate in public in 1983 and 1984 to publicize the problems of the Beurs and immigrants in France. In doing so, the Maghrebis in France began to develop a stronger identity unified by the problems that have been imposed on them economically and politically. The banlieue became a unifying point for the marginalised immigrants of France even if there are various identities that constitute these individual groups. "We don't consider ourselves completely French... Our parents were Arabs.... We were born in France (and only visited Algeria a few times).... So what are we? French? Arab? In the eyes of the French we are Arabs... but when we visit Algeria some people call us immigrants and say we've rejected our culture. We've even had stones thrown at us."[7] Overall, the displacement of identities that Franco-Maghrebis feel becomes a unifying factor in French society and assimilation is particularly difficult because of their placement in the banlieue, and the violence portrayed at events such as the summer 1981.

Violent clashes between hundreds of youths and French police in the Paris banlieue of Clichy-sous-Bois began on 27 October 2005 and continued for more than 17 nights.[8] The 2005 Paris suburb riots were triggered by the deaths of two teenagers (of black and Maghrebi descent) allegedly/attempting to hide from police in an electrical substation and were electrocuted.[9]

From 18 April, Paris saw several nights of violent clashes over police treatment of ethnic minorities in Banlieue during the coronavirus lockdown.[10][11][12]

Retrieved from "http://en.turkcewiki.org/w/index.php?title=Banlieue&oldid=968198804"
This website is a mirror of Wikipedia, and is not affiliated with the Wikimedia Foundation.
Categories:
Hidden categories: