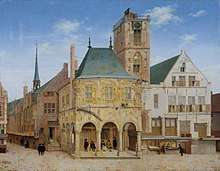 A painting by Pieter Saenredam of the old town hall in Amsterdam where the bank was founded in 1609.

The Exchange Bank of Amsterdam (Dutch: Amsterdamsche Wisselbank) was an early bank, vouched for by the city of Amsterdam, established in 1609, the precursor to, if not the first, modern central bank.[1]

During the last decade of the Republic of the United Provinces, in 1790, the premium on the Bank's money disappeared, and by the end of the year it had declared itself insolvent. The City of Amsterdam assumed control of the bank in 1791. The Nederlandsche Bank was established in 1814 and took over money issue duties for the new Kingdom of the Netherlands, while the Wisselbank entered liquidation in 1820.

In Renaissance Europe, the currency of small states—such as Genoa, Hamburg, Venice, and Nuremberg—consisted in large part of the currencies of neighboring nations. The foreign money, clipped and worn, lowered the value of a country's currency. A country's own freshly minted money, therefore, bore an agio, being worth more than its stock currency. Furthermore, it was melted as soon as it was released, its metallic content being worth more than its nominal value.

In order to remedy this situation, a bank was founded in 1609 under the protection of the city of Amsterdam. This bank at first received both foreign and local coinage at their real, intrinsic value, deducted a small coinage and management fee, and credited clients in its book for the remainder. This credit was known as bank money. Being always in accord with mint standards, and always of the same value, bank money was worth more than real coinage. At the same time a new regulation was introduced; according to which all bills drawn at Amsterdam worth more than 600 guilders must be paid in bank money. This both removed all uncertainty from these bills and compelled all merchants to keep an account with the bank, which in turn occasioned a certain demand for bank money.

Bank money had several distinct advantages over other forms of money. It was secure from fire, robbery and other accidents; was backed by the city of Amsterdam; and could be paid or received by a simple transfer, avoiding both the costs of counting and the risks of conveyance. Furthermore, it was of a known, superior quality. Because of the above it bore an agio, being worth more than its nominal value. Consequentially, it was not often that clients asked for their money to be extracted from the bank. A shilling freshly minted would buy no more than a clipped and worn one. It was better for clients to sell the debt the bank owed them—their credit—at the market, earning a premium, which is the expression of the aforementioned agio.

Deposits of bullion and coin[edit]

Deposits of coin constituted but a small part of bank capital. Most of the bank's capital originated with deposits of gold and silver bullion, intrinsically of higher value as bullion was not debased, unlike most of the circulating coinage.

The Bank of Amsterdam gave credit for deposits of gold and silver worth about 5 percent less than their mint price. It granted the depositor a receipt, which allowed him to claim his deposit 6 months later, upon returning to the bank the same value of bank money for which credit was given, and payment of a fee for the keeping—a warehouse rent of sorts—worth 0.25% for silver, and 0.5% for gold. This fee could, of course, be paid every 6 months, extending the period of deposit. The difference of fees has been attributed both to the difficulty of ascertaining the purity of gold and to a wish to encourage deposits of silver, it being the standard metal of the time. If a depositor did not claim his deposit back after six months, it fell to the bank, and the depositor was left with the credit he received in compensation.

The terms of deposit were such that deposits of bullion were most commonly made when the price was somewhat lower than ordinary, and taken out again when it rose. The proportions between the bank price (the credit which the bank gave for deposits of bullion), the mint price, and the market price of gold bullion were always nearly the same. A person could generally sell his receipt for the difference between the mint price of bullion and the market price. As a receipt was nearly always worth something, it was only rarely that deposits were allowed to fall to the bank through the expiration of receipts (which means the depositor neither paid additional keeping fees nor removed his deposit from the bank). This happened more frequently with regard to gold, due to its higher keeping fee.

The bank also took in coin, granting credit and receipts in exchange, and charging 0.25% for the keeping. These receipts were often of no value, however, and the deposit was allowed to fall to the bank.

The bank maintained it did not lend any of the bullion deposited in it, not even that part for which the receipts expired, and which could not generally be claimed.

The bank allowed no withdrawal except by means of a receipt. There was, however, more bank money available than the combined value of all receipts – because some receipts have been allowed to expire, but the bank money, or credit, remained in the bank's books. In times of peace, a client who wished to withdraw his deposit had no trouble purchasing a receipt and making a withdrawal. In times of distress, however, as during the French invasion in 1672, the price or receipts could be pushed upwards by demand.

While this was not its original aim, the Bank of Amsterdam proved profitable to the city which provided for it. In addition to the keeping fee mentioned above, each person, upon first opening an account, paid a fee of ten guilders; and three guilders three stuivers for each additional account. Two stuivers were paid for each transaction, excepting those of less than three hundred guilders, for which six stuivers were paid, in order to discourage the multiplicity of small transactions. A person who neglected to balance his account twice in the year forfeited twenty-five guilders. A person who ordered a transfer for more than was upon his account, was obliged to pay three per cent for the sum overdrawn. The bank made further profit by selling foreign coin and bullion which fell to it by the expiration of receipts, and by selling bank money at five percent agio, and buying it at four percent. These sources of revenue were more than enough to pay for the wages of bank officers, and defray the expense of management.

The bank was administered by a committee of city government officials concerned to keep its affairs secret. It initially operated on a deposit-only basis, but by 1657 it was allowing depositors to overdraw their accounts, and lending large sums to the Municipality of Amsterdam and the United East Indies Company (Dutch East India Company). Initially this was kept confidential, but it had become public knowledge by 1790. The agio on the bank money dropped from a premium at peak of around 6.25% to a discount of 2%, and by the end of the year the bank had to declare itself insolvent, offering to sell silver at a 10% discount to depositors. The City of Amsterdam took over direct control in 1791 and decreed its liquidation in December 1819.[2]

Retrieved from "http://en.turkcewiki.org/w/index.php?title=Amsterdam_Wisselbank&oldid=967621658"
This website is a mirror of Wikipedia, and is not affiliated with the Wikimedia Foundation.
Categories:
Hidden categories: