The "Drndička" was the first automobile to be fully constructed in Slovakia and was constructed by the blacksmith Michal Majer in 1913.[6] He copied a car owned by the Bulgarian King who was at that time travelling through Slovakia. After World War I Slovakia became a part of the newly formed Czechoslovakia. In the Czech part, the industry had been influenced mostly by Germans - see for example the dispute about the design of Tatra T97 by Hans Ledwinka vs Volkswagen Beetle design by Ferdinand Porsche, who was also born in Bohemia (now part of the Czech Republic). The long tradition of Czech car production started in 1897, when the first Czech car (Präsident) was produced in the factory in Kopřivnice (Nesselsdorfer Wagenbaufabriksgesellschaft later Tatra), followed by the first lorry in 1898. Škoda Auto (and its predecessors) is the world's fifth oldest company producing cars and has an unbroken history. The first Škoda motorcycle made its debut in 1899 and in 1905 the firm started manufacturing automobiles. Even before World War II the automotive industry was a significant and advanced part of the economy of the former Czechoslovakia. Post-war socialist Czechoslovakia restored auto manufacturing with the original brands and became the second largest (after Poland) in the Soviet block outside the USSR. The Czechoslovakian producers Skoda (who produced cars and trolleybuses), Tatra and Avia (who mainly produced trucks and trams), Karosa (buses) Jawa and ČZ (motorcycles) all had their production in the present-day Czech Republic, not in Slovakia. Companies in Slovakia, including Matador Púchov and VSŽ Košice (steel mills), were supplying parts and components to the Czech part of the republic but later (from 1971) some final production of Skoda cars was also established in Slovakia as Bratislava Automotive Works (BAZ) and Trnava Automotive Works (TAZ). Some Tatra car production was also moved to Banovce nad Bebravou. However, following the dissolution of Czechoslovakia in 1993, the Czech Republic inherited most of its auto production capabilities and since then has grown fast through foreign investment. Although Volkswagen bought Skoda's production sites in Slovakia in 1991, it gained full control only in 1999 when Volkswagen Slovakia was established, which was the real beginning of the rapid development of the auto-industry in Slovakia.

Slovakia is one of the significant European (7th) and World's (20th) automaker, having an annual output of more than 1 million and exports to more than 100 countries. Auto manufacturers in Slovakia, currently include 4 OEM automobile production plants: Volkswagen's in Bratislava, PSA Peugeot Citroën's in Trnava and Kia Motors' Žilina Plant and Jaguar Land Rover in Nitra. There are many other tier suppliers.

Volkswagen Touareg is produced in Bratislava.

Citroën C3 Picasso from middle of 2008

Kia Cee'd is produced in Žilina. 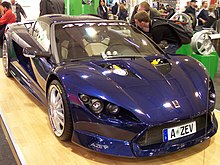 Retrieved from "http://en.turkcewiki.org/w/index.php?title=Automotive_industry_in_Slovakia&oldid=916551390"
This website is a mirror of Wikipedia, and is not affiliated with the Wikimedia Foundation.
Categories:
Hidden categories: