Jump to navigation Jump to search
correlation of a signal with a time-shifted copy of itself, as a function of shift 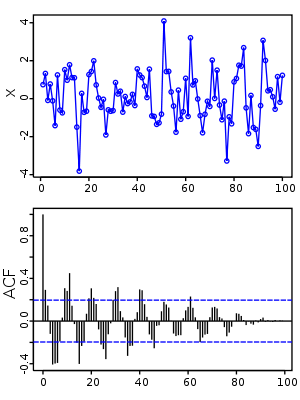 Above: A plot of a series of 100 random numbers concealing a sine function. Below: The sine function revealed in a correlogram produced by autocorrelation. 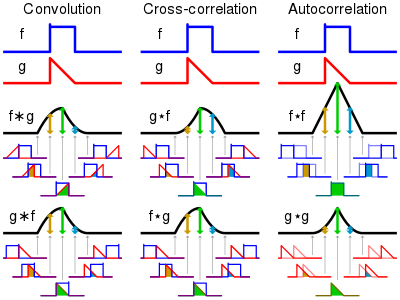 Visual comparison of convolution, cross-correlation, and autocorrelation. For the operations involving function f, and assuming the height of f is 1.0, the value of the result at 5 different points is indicated by the shaded area below each point. Also, the symmetry of f is the reason

are identical in this example.

Autocorrelation, also known as serial correlation, is the correlation of a signal with a delayed copy of itself as a function of delay. Informally, it is the similarity between observations as a function of the time lag between them. The analysis of autocorrelation is a mathematical tool for finding repeating patterns, such as the presence of a periodic signal obscured by noise, or identifying the missing fundamental frequency in a signal implied by its harmonic frequencies. It is often used in signal processing for analyzing functions or series of values, such as time domain signals.

Different fields of study define autocorrelation differently, and not all of these definitions are equivalent. In some fields, the term is used interchangeably with autocovariance.

In statistics, the autocorrelation of a real or complex random process is the Pearson correlation between values of the process at different times, as a function of the two times or of the time lag. Let

be a random process, and

be any point in time (

may be an integer for a discrete-time process or a real number for a continuous-time process). Then

. Suppose that the process has mean

. Then the definition of the auto-correlation function between times

is the expected value operator and the bar represents complex conjugation. Note that the expectation may not be well defined.

Note that this expression is not well-defined for all-time series or processes, because the mean may not exist, or the variance may be zero (for a constant process) or infinite (for processes with distribution lacking well-behaved moments, such as certain types of power law).

is a wide-sense stationary process then the mean

are time-independent, and further the autocovariance function depends only on the lag between

. This gives the more familiar forms for the auto-correlation function[1]:p.395

The definition of the auto-correlation coefficient of a stochastic process is[2]:p.169

is well-defined, its value must lie in the range

The fact that the auto-correlation function

and will be exactly 0 for all other

to the power spectral density

via the Fourier transform:

For real-valued functions, the symmetric autocorrelation function has a real symmetric transform, so the Wiener–Khinchin theorem can be re-expressed in terms of real cosines only:

For a random vector

denotes transposition and has dimensions

is a complex random vector, the autocorrelation matrix is instead defined by

is a random vectors, then

Properties of the autocorrelation matrix[edit]

In signal processing, the above definition is often used without the normalization, that is, without subtracting the mean and dividing by the variance. When the autocorrelation function is normalized by mean and variance, it is sometimes referred to as the autocorrelation coefficient[4] or autocovariance function.

is most often defined as the continuous cross-correlation integral of

with itself, at lag

represents the complex conjugate of

. Note that the parameter

in the integral is a dummy variable and is only necessary to calculate the integral. It has no specific meaning.

for a discrete-time signal

For processes that are not stationary, these will also be functions of

For processes that are also ergodic, the expectation can be replaced by the limit of a time average. The autocorrelation of an ergodic process is sometimes defined as or equated to[4]

These definitions have the advantage that they give sensible well-defined single-parameter results for periodic functions, even when those functions are not the output of stationary ergodic processes.

is a continuous periodic functions of period

is replaced by integration over any interval

which is equivalent to

the autocorrelation is an even function

is a real function,

and the autocorrelation is a Hermitian function

is a complex function.

When mean values are subtracted from signals before computing an autocorrelation function, the resulting function is usually called an auto-covariance function.

For data expressed as a discrete sequence, it is frequently necessary to compute the autocorrelation with high computational efficiency. A brute force method based on the signal processing definition

can be used when the signal size is small. For example, to calculate the autocorrelation of the real signal sequence

for all other values of i) by hand, we first recognize that the definition just given is the same as the "usual" multiplication, but with right shifts, where each vertical addition gives the autocorrelation for particular lag values:

Thus the required autocorrelation sequence is

the autocorrelation for other lag values being zero. In this calculation we do not perform the carry-over operation during addition as is usual in normal multiplication. Note that we can halve the number of operations required by exploiting the inherent symmetry of the autocorrelation. If the signal happens to be periodic, i.e.

which has the same period as the signal sequence

The procedure can be regarded as an application of the convolution property of z-transform of a discrete signal.

While the brute force algorithm is order n2, several efficient algorithms exist which can compute the autocorrelation in order n log(n). For example, the Wiener–Khinchin theorem allows computing the autocorrelation from the raw data X(t) with two fast Fourier transforms (FFT):[6]

Alternatively, a multiple τ correlation can be performed by using brute force calculation for low τ values, and then progressively binning the X(t) data with a logarithmic density to compute higher values, resulting in the same n log(n) efficiency, but with lower memory requirements.[7][8]

, an estimate of the autocorrelation may be obtained as

for any positive integer

. When the true mean

are known, this estimate is unbiased. If the true mean and variance of the process are not known there are several possibilities:

The advantage of estimates of the last type is that the set of estimated autocorrelations, as a function of

, then form a function which is a valid autocorrelation in the sense that it is possible to define a theoretical process having exactly that autocorrelation. Other estimates can suffer from the problem that, if they are used to calculate the variance of a linear combination of the

's, the variance calculated may turn out to be negative.[11]

The traditional test for the presence of first-order autocorrelation is the Durbin–Watson statistic or, if the explanatory variables include a lagged dependent variable, Durbin's h statistic. The Durbin-Watson can be linearly mapped however to the Pearson correlation between values and their lags.[12] A more flexible test, covering autocorrelation of higher orders and applicable whether or not the regressors include lags of the dependent variable, is the Breusch–Godfrey test. This involves an auxiliary regression, wherein the residuals obtained from estimating the model of interest are regressed on (a) the original regressors and (b) k lags of the residuals, where 'k' is the order of the test. The simplest version of the test statistic from this auxiliary regression is TR2, where T is the sample size and R2 is the coefficient of determination. Under the null hypothesis of no autocorrelation, this statistic is asymptotically distributed as

with k degrees of freedom.

In the estimation of a moving average model (MA), the autocorrelation function is used to determine the appropriate number of lagged error terms to be included. This is based on the fact that for an MA process of order q, we have

Serial dependence is closely linked to the notion of autocorrelation, but represents a distinct concept (see Correlation and dependence). In particular, it is possible to have serial dependence but no (linear) correlation. In some fields however, the two terms are used as synonyms.

. A series is serially independent if there is no dependence between any pair.

If a time series

is stationary, then statistical dependence between the pair

Retrieved from "http://en.turkcewiki.org/w/index.php?title=Autocorrelation&oldid=967006056"
This website is a mirror of Wikipedia, and is not affiliated with the Wikimedia Foundation.
Categories:
Hidden categories: