Jump to navigation Jump to search
Variety of Standard German

Austrian German has its beginning in the mid-18th century, when empress Maria Theresa and her son Joseph II introduced compulsory schooling (in 1774) and several reforms of administration in their multilingual Habsburg empire. At the time, the written standard was Oberdeutsche Schreibsprache, which was highly influenced by the Bavarian and Alemannic dialects of Austria. Another option was to create a new standard based on the Southern German dialects, as proposed by the linguist Johann Siegmund Popowitsch. Instead they decided for pragmatic reasons to adopt the already standardized Chancellery language of Saxony (Sächsische Kanzleisprache or Meißner Kanzleideutsch), which was based on the administrative language of the non-Austrian area of Meißen and Dresden. Thus Standard Austrian German has the same geographic origin as the German Standard German (Bundesdeutsches Hochdeutsch) and Swiss High German (Schweizer Hochdeutsch, not to be confused with the Alemannic Swiss German dialects).

The process of introducing the new written standard was led by Joseph von Sonnenfels. Since 1951 the standardized form of Austrian German for official texts and schools has been defined by the Austrian Dictionary (Österreichisches Wörterbuch), published under the authority of the Austrian Federal Ministry of Education, Arts and Culture.

As German is a pluricentric language, Austrian German is one among several varieties of Standard German. Much like the relationship between British English and American English, the German varieties differ in minor respects (e.g., spelling, word usage and grammar) but are recognizably equivalent and largely mutually intelligible.

Austrian delegates participated in the international working group that drafted the German spelling reform of 1996—several conferences leading up to the reform were hosted in Vienna at the invitation of the Austrian federal government—and adopted it as a signatory, along with Germany, Switzerland, and Liechtenstein, of an international memorandum of understanding (Wiener Absichtserklärung) signed in Vienna in 1996. 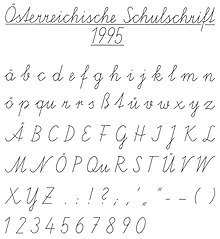 A street sign in Vienna: Fußgeher ("pedestrian") is normally Fußgänger in Germany. Capital ẞ instead of SS when a word is written in all-caps was incorporated into the spelling standard of both countries in 2017, although the use of SS is still correct.

Because of the German language's pluricentric nature, German dialects in Austria should not be confused with the variety of Standard German spoken by most Austrians, which is distinct from that of Germany or Switzerland.

Distinctions in vocabulary persist, for example, in culinary terms, where communication with Germans is frequently difficult, and administrative and legal language, which is due to Austria's exclusion from the development of a German nation-state in the late 19th century and its manifold particular traditions. A comprehensive collection of Austrian-German legal, administrative and economic terms is offered in Markhardt, Heidemarie: Wörterbuch der österreichischen Rechts-, Wirtschafts- und Verwaltungsterminologie (Peter Lang, 2006).

The former standard, used for about 300 years or more in speech in refined language, was the Schönbrunner Deutsch, a sociolect spoken by the imperial Habsburg family and the nobility of Austria-Hungary. It differed from other dialects in vocabulary and pronunciation; it appears to have been spoken with a slight degree of nasality.[citation needed] This was not a standard in a modern technical sense, as it was just the social standard of upper-class speech.[note 1]

For many years, Austria had a special form of the language for official government documents. This form is known as Österreichische Kanzleisprache, or "Austrian chancellery language". It is a very traditional form of the language, probably derived from medieval deeds and documents, and has a very complex structure and vocabulary generally reserved for such documents. For most speakers (even native speakers), this form of the language is generally difficult to understand, as it contains many highly specialised terms for diplomatic, internal, official, and military matters. There are no regional variations, because this special written form has mainly been used by a government that has now for centuries been based in Vienna.

Österreichische Kanzleisprache is now used less and less, thanks to various administrative reforms that reduced the number of traditional civil servants (Beamte). As a result, Standard German is replacing it in government and administrative texts.

When Austria became a member of the European Union, 23 food-related terms were listed in its accession agreement as having the same legal status as the equivalent terms used in Germany.[7] Austrian German is the only variety of a pluricentric language recognized under international law or EU primary law.[8]

In Austria, as in the German-speaking parts of Switzerland and in southern Germany, verbs that express a state tend to use sein as the auxiliary verb in the perfect, as well as verbs of movement. Verbs which fall into this category include sitzen (to sit), liegen (to lie) and, in parts of Carinthia, schlafen (to sleep). Therefore, the perfect of these verbs would be ich bin gesessen, ich bin gelegen and ich bin geschlafen respectively (note: ich bin geschlafen is a rarely used form, more commonly ich habe geschlafen is used).

In addition, the preterite (simple past) is very rarely used in Austria, especially in the spoken language, with the exception of some modal verbs (i.e. ich sollte, ich wollte).

There are many official terms that differ in Austrian German from their usage in most parts of Germany. Words used in Austria are Jänner (January) rather than Januar, Feber (seldom, February) along with Februar, heuer (this year) along with dieses Jahr, Stiege (stairs) along with Treppen, Rauchfang (chimney) instead of Schornstein, many administrative, legal and political terms, and many food terms, including the following:[9]

There are, however, some false friends between the two regional varieties:

In addition to the standard variety, in everyday life most Austrians speak one of a number of Upper German dialects.

Viennese, the Austro-Bavarian dialect of Vienna, is seen for many in Germany as quintessentially Austrian. The people of Graz, the capital of Styria, speak yet another dialect which is not very Styrian and more easily understood by people from other parts of Austria than other Styrian dialects, for example from western Styria.

Simple words in the various dialects are very similar, but pronunciation is distinct for each and, after listening to a few spoken words, it may be possible for an Austrian to realise which dialect is being spoken. However, in regard to the dialects of the deeper valleys of the Tirol, other Tyroleans are often unable to understand them. Speakers from the different states of Austria can easily be distinguished from each other by their particular accents (probably more so than Bavarians), those of Carinthia, Styria, Vienna, Upper Austria, and the Tyrol being very characteristic. Speakers from those regions, even those speaking Standard German, can usually be easily identified by their accent, even by an untrained listener.

Retrieved from "http://en.turkcewiki.org/w/index.php?title=Austrian_German&oldid=955817898"
This website is a mirror of Wikipedia, and is not affiliated with the Wikimedia Foundation.
Categories:
Hidden categories: