Depiction of harvesting in the August calendar page of the Queen Mary Psalter (fol. 78v), ca. 1310

August is the eighth month of the year in the Julian and Gregorian calendars, and the fifth of seven months to have a length of 31 days.[1] It was originally named Sextilis in Latin because it was the sixth month in the original ten-month Roman calendar under Romulus in 753 BC, with March being the first month of the year. About 700 BC, it became the eighth month when January and February were added to the year before March by King Numa Pompilius, who also gave it 29 days. Julius Caesar added two days when he created the Julian calendar in 46 BC (708 AUC), giving it its modern length of 31 days. In 8 BC, it was renamed in honor of Augustus. According to a Senatus consultum quoted by Macrobius, he chose this month because it was the time of several of his great triumphs, including the conquest of Egypt.[2]

Among the aborigines of the Canary Islands, especially among the Guanches of Tenerife, the month of August received in the name of Beñesmer or Beñesmen, which was also the harvest festival held this month.[4][5] 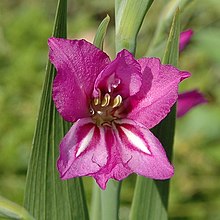 This list does not necessarily imply either official status or general observance.

(All Baha'i, Islamic, and Jewish observances begin at the sundown prior to the date listed, and end at sundown of the date in question unless otherwise noted.)

Food Months in the United States[edit]

Sunday on or closest to August 9: August 9[edit]

Retrieved from "http://en.turkcewiki.org/w/index.php?title=August&oldid=940515069"
This website is a mirror of Wikipedia, and is not affiliated with the Wikimedia Foundation.
Categories:
Hidden categories: