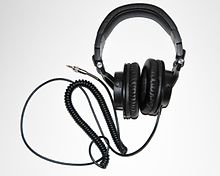 Audio-Technica was established in 1962 in Shinjuku, Tokyo, Japan, by Hideo Matsushita as a phonograph cartridge manufacturer. Its first products were the AT-1 and the AT-3 MM stereo phono cartridges. Business rapidly developed and Audio-Technica expanded into other fields. Headquarters and factory moved in 1965 to the current address in Naruse, Machida, Tokyo.[1] In 1969, the company began exporting phono cartridges worldwide and launched the first microcassette recorders.[2]

In 1972, Audio-Technica established its US arm in Fairlawn, Ohio and started shipping VM phono cartridges to European manufacturers. In 1974, the company developed its first headphones, the AT-700 series, launched the same year. The AT-800 series of microphones were introduced in 1978 and in the same year the UK establishment in Leeds began operation.[1]

In 1986, the company developed RCA cables with "pure copper" produced with the continuous metal casting process (PCOCC), invented and developed between 1982 and 1985 by Atsumi Ohno.[3] In the same year, the company launched the AT33ML/OCC phono cartridge, the first made with PCOCC materials. In 1988, another Audio-Technica subsidiary is founded in Taiwan.[1]

In 2008, the company celebrated the 20th anniversary of supplying microphones for US Presidential Debates. For their 50th anniversary, Audio-Technica celebrated at Consumer Electronics Show 2012, debuting their AT-LP1240-USB USB DJ Turntable[6] and ATH-CKS55i.[7]

Since the late 1990s, Audio-Technica supplied microphones and headphones for US television shows such as the Big Brother, Deal or No Deal, the Rock and Roll Hall of Fame inductions and several international events:

One of their most famous products was a battery-operated, portable record player called Mister Disc that was sold in the U.S. in the early 1980s.[citation needed]

In 2005, Audio-Technica developed "Uniguard", a method for making microphones resistant to radio frequency interference from cell phones, Bluetooth devices, wireless computer networks and walkie-talkies. 13 patents were involved in bringing the feature to fruition, as company engineers modified many different elements of microphone construction and operation. Over 50 existing Audio-Technica microphone models have been upgraded with the new RFI-resistant technology.[13][14][15]

Retrieved from "http://en.turkcewiki.org/w/index.php?title=Audio-Technica&oldid=936710379"
This website is a mirror of Wikipedia, and is not affiliated with the Wikimedia Foundation.
Categories:
Hidden categories: